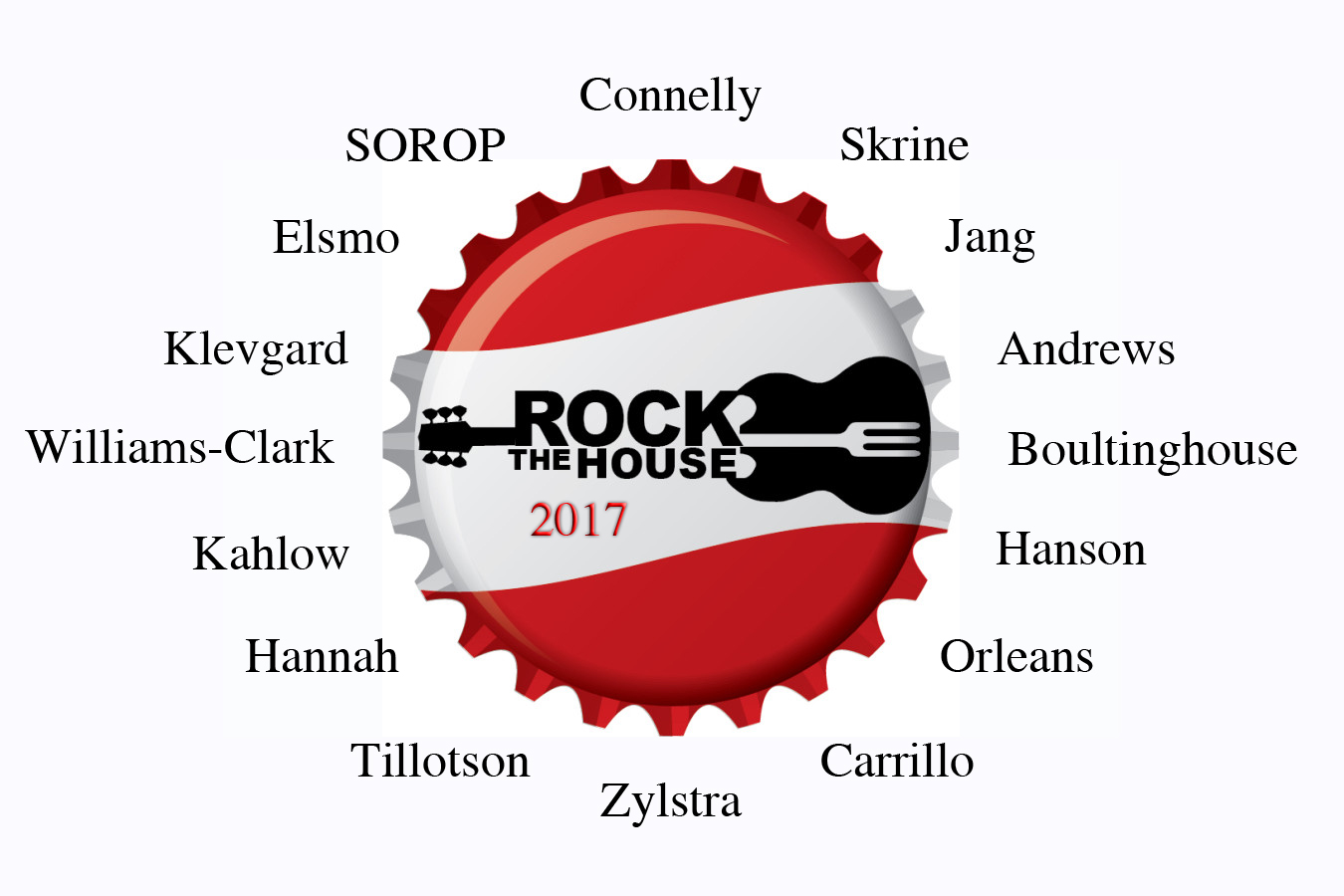 This year will be the best Rock the House ever!

This event always sells out, so buy your tickets now!

Our special musical guest will be Chris Connelly, the iconic leader of Sons of the Silent Age and member of Ministry, RevCo, and more. Chris will be performing original music for the first time in over a decade! You don’t want to miss this special event.

The opening act will be the supremely talented School of Rock Oak Park Show Team. If you’ve attended this party in the past, you already know how amazing these musicians are!

Of course, we will also have our Rock Star Brewers and Culinary All Stars at the party:

You can enjoy unique craft beers from accomplished home brewers and taste culinary delights from chefs who call Oak Park home. All of these brews and dishes are created especially for this event.

Melissa Elsmo: Melissa Elsmo makes you believe you can enjoy every meal just as she does: fully and enthusiastically. A trained chef and ardent foodie, Mel’s passion for a good meal peppers her life. She is a regular food columnist for Chicago Tribune Media newspapers, reaching more than 500,000+ readers in the Chicago area via print and on the web. As part of Chicago’s underground supper club scene, she creates intimate 12-course dining experiences featuring her own recipes and artful approach to plating. Guests currently wait patiently for a seat around her table, but savvy food lovers can locate her at pop-up events around the city. Additionally, Mel is a passionate volunteer and frequently uses her kitchen talents to assist local philanthropic organizations with their fundraising efforts.

Steve Skrine: Owner and grillmaster of Skrine Chops, Steve Skrine worked at the Chicago Board of Trade for over 22 years, but his real passion in life has always been food and cooking. For years, he’s made SkrineChops, his signature dish, for many friends, restaurants, pubs, charities and festivals throughout the city of Chicago and its suburbs. This year, he brings his generosity, skills, and love of food to the Rock the House event, helping to make it bigger and better!

Su Jang: The owner of New Rose Catering grew up in her family’s Chinese restaurant. Her father told her to learn to cook and she would always have a job. New Rose Catering was formed after Su was laid off from her healthcare marketing position and remembered her father’s words, and quickly began helping Oak Park, River Forest, and Forest Park busy families answer the dreaded “What’s for dinner?” question. In addition to providing weekly dinners as a personal chef, New Rose Catering also provides delicious and fun twists on classic dishes for small events catering.

Rich Klevgard: Graphic designer Rich Klevgard of Oak Park has been recreating BBQ classics for well over a decade. His obsession with southern barbecue traces back to his boyhood boarding school days in Chattanooga, Tennessee, a car ride down an unpaved road through trees to a shack in the woods where the only smell was burning hickory and the sweet, awe-inspiring flavors of pork. Today, Klevard’s dry rubs vary from sweet to savory with a hints of coffee, caramel, coriander, and a touch of smoked anise. His sauces, often based from locally harvested honey or herb infused rye whiskey, satiate but never overplay the deliciousness of smoked pork. Generous and enthusiastic, he enjoys using his culinary skills as a means to support various causes in the community.

Deno Andrews: A former corporate executive, Deno opened Felony Franks in Oak Park, a gourmet fast-food concept restaurant that employs and trains men and women who have been to prison. Felony Franks proudly serves Chicago-style comfort food and has built a reputation on superior food quality and customer service. Some of the staples of the Felony Franks menu include the Misdemeanor Wiener, Parolish Sausage, Breakout Burgers, and the Big House Beef. Felony Franks will be featuring locally-made Italian Sausage at the Rock the House event.

Dave Kahlow: Dave has been brewing for about 23 years and enjoys learning nuances about the brewing process and sharing the brewing experience with people throughout his life. Dave enjoys taking what appear to be simple ingredients and converting them into a variety of beer styles that can be shared with friends and family. Oh yeah, and Dave lived in Portland where he picked up a lot of good tips.

Dru Williams-Clark: Dru had a super brew last year and is ready to kick it up a notch this year.

Amy Hanson / FLED Bier: Amy is the alchemic architect behind FLED Bier, a home brewing enterprise founded with her brew partner in crime, Linda DeViller, which aims to perfect gluten-free brewing. With more than 15 styles of gluten-free brewed options, FLED will change the way you drink gluten-free beer. The beer FLED will be pouring at the event is their flagship brew, FLED, a Citra hopped IPA.

John Orleans: By day, John Orleans is a mild-mannered “IT guy” in the city of Chicago. Nights and weekends, you can find him brewing beer, smoking meats, and racing bicycles.

Graham Tillotson: Graham lives in Oak Park and spends most of his time on the road consulting, but at home he has a house full of beautiful girls who put up with his basement brewery. He is supported by Charlie, his faithful shelter dog. The beer he will be bringing to the event is for Lemmy of Motörhead and it goes all the way to 11!

Joshua Zylstra: Josh lives in Oak Park with his wife and two children. He is a member of the Oak Park Home Brewers Club. Josh is passionate about the diversity of beer and enjoys brewing hop forward pales and IPAs. During the day, Josh has built a career in the motion picture industry in the set decoration department. He is currently enjoying his fourth season on NBC’s dramatic series “Chicago PD.”

Nicolas Carrillo: It all started for curiosity — “home brewing sounds fun.” So Nicolas informed himself about everything related, and two years ago, brewed his first extract batch. After a year of playing around, one of his best friends took it seriously and asked Nicolas to brew his best beer for his wedding, which forced him to get into all grain. Ever since then, he says, every batch is fun because he gets to control everything. “I’m lucky to be surrounded by good friends that help me finish and don’t waste any beer. Plus, they are my best critics about what one day started as a curiosity then hobby. Now I hope to convert this into a business.”