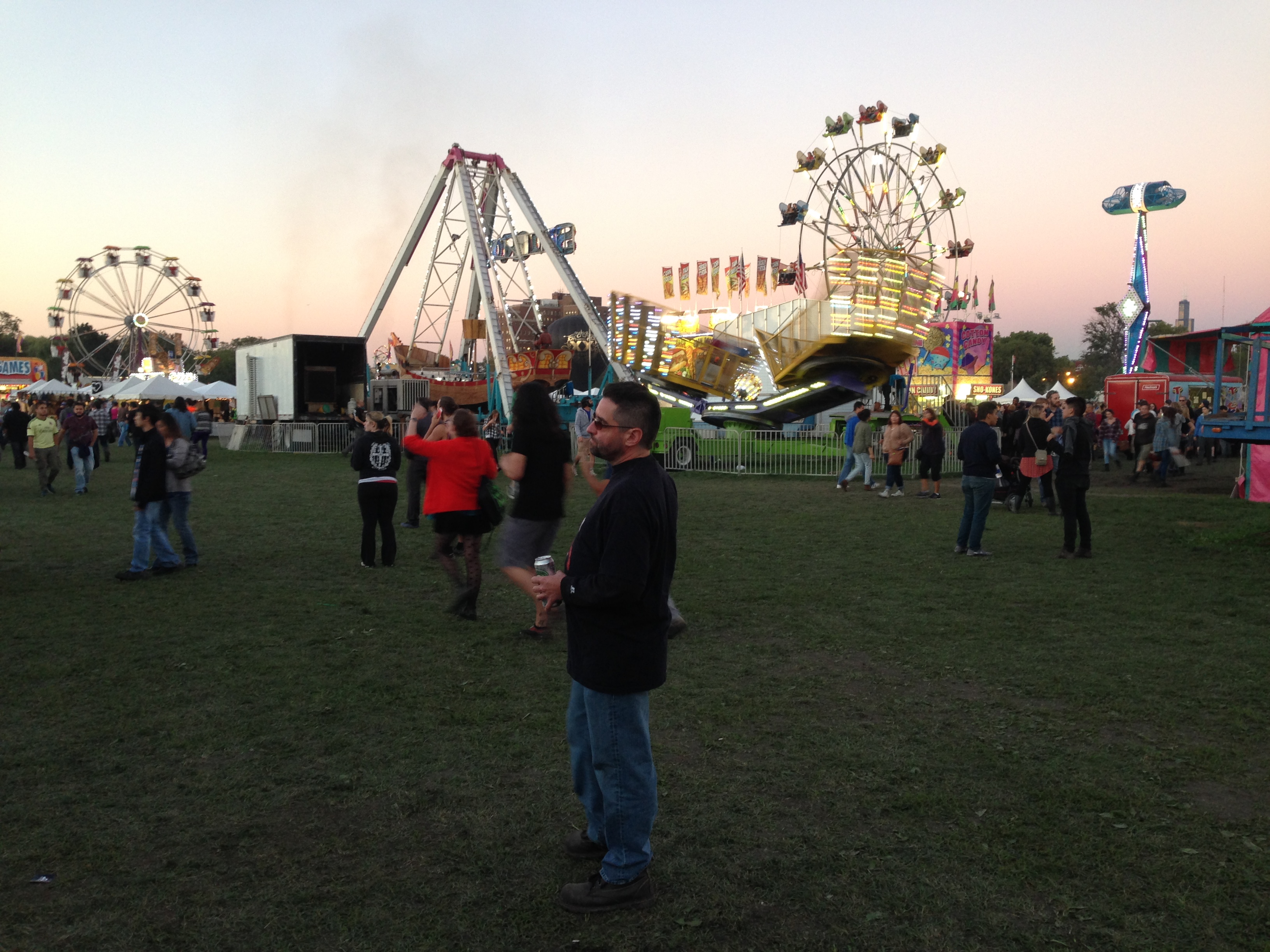 2015 was a year of change, for better or worse, in the literal and figurative landscape of Riot Fest. While preemptive noise complaints and a location change boiling in controversy could have overshadowed many a music festival, Riot Fest’s supporters are nothing if not loyal, and the Fest went off in Douglas Park over the weekend with a solid series of performances all around.

If Anthrax were to claim a second home, Chicago would be an easy choice. Drummer Charlie Benante lives here, and the band’s studio is hidden in the depths of a warehouse district here in the Big Windy, so a warm reception for New York’s biggest thrash metal band was a no-brainer, though the band delivered as though they were playing to a field of faces unfamiliar with how it felt to be caught in a mosh. A disadvantage to any festival is set length; while many would argue that it allows for more acts to be seen, and therefore the discovery of new and unheard things on the part of the attendee, I would argue that it doesn’t give a band much time to find a groove in the way that a normal set’s length would. That said, seasoned bands don’t often need the warmup, and from opener “Madhouse” to Among The Living anthem “Indians,” the metal quintet were on point.

It’s been a big year so far for Speedy Ortiz, with the “Foil Deer” album getting much deserved recognition from every corner of the indie rock globe. The band’s set on the Revolt Stage was strong, and frontwoman Sadie Dupuis comes across as a combination of Liz Phair and Stephen Malkmus, with a dash of Tanya Donelly thrown in. That’s not to say that Speedy’s sound is derivative they simply take the best elements of some seminal ‘90s alternative rock and throw it in a blender with excellent results. (If anything, more of the current indie rock wave would benefit from wearing their influences as clearly on their sleeves as Speedy Ortiz does.) During tracks like “The Graduates,” “Puffer,” and “Raising the Skate,” it was tough to not, for a few moments, squint and imagine that you were watching the second stage at Lollapalooza, circa1995. In a good way.

In the pantheon of signature introductions, it’s this writer’s hope that this simple but consistent intro makes the cut: “We are Motorhead, and we play rock n’ roll.”

No Doubt may have been the big draw on the other side of the park, but for those who were in need of straight up rock n’ roll (something that was, even with a few notable exceptions, sorely lacking at this year’s Riot Fest), the Rebel Stage was the only place to be on Friday night as Motorhead returned to the road following Lemmy’s recent and fairly serious health issues. While taking things a bit slower than usual, particularly on tracks like “Ace of Spades” and set closer “Overkill,” Lemmy was in solid, jovial form, joking with the crowd and reflecting on the generational span of the Riot Fest audience. Introducing “Dr. Rock” from 1986’s classic Orgasmatron, he pointed at a cheering member of the crowd, noting, “no, you’re too young to even know that album.” And if ever the term ‘power trio’ should be in the dictionary, surely pictures of guitarist Phil Campbell and drummer Mikkey Dee (arguably the best in heavy metal/rock) will accompany Mr. Kilminster, providing a sound fuller than many bands could boast with twice the members. The set leaned heavily on 1979’s Overkill record, with “Damage Case,” “Stay Clean,” and “Metropolis” as highlights, with no attention being paid to new material in spite of Bad Magic (the band’s 22nd album consider that for a moment, kids) having been released the previous week. “Lost Woman Blues,” a standout from the Aftershock record, was a welcome shift in pace, and “The Chase Is Better Than the Catch” turned into an extended opportunity to get a sense of Campbell’s blhesbased chops.

And in spite of a consistent mosh pit, the hourlong set showcased the fact that Motorhead (by their own admission) have never really been a heavy metal band, at least not in the same way as Metallica, Slayer, or any other number of names associated with the term. They are Motorhead, and they play rock n’ roll. It doesn’t really need to be any more complicated than that, when you’re good at it. And after 40 years on the road, they are. Damn good.

Indie popsters Alvvays, hailing from Nova Scotia, played a tight 30 minute set under a bright blue sky, the weather perfectly reflecting their breezy, melodic tunes. Singer Molly Rankin has an ethereal tone to her vocals that at once calls to mind the sweeping vocals of Scotland’s Camera Obscura, and the band showcased choice cuts from their 2014 self titled debut album, including single “Archie, Marry Me,” “Next of Kin,” “Party People,” and opener “Adult Diversion.” Alvvays has the songs you don’t hit #1 in the U.S. college radio charts on your first outing without solid tunes and falling early in the afternoon, alas, their set was all too brief. If their live show is any indication, following this band’s trajectory will be a pleasure.

In every musical era, there are bands that somehow just don’t get the widespread recognition they deserve but often, these bands become cult favorites and return to great excitement among their still loyal fan base. Hum is Illinois’s best example of this. Hailing from Champaign and releasing three excellent records between 1993 and 1998, and best known for their 1995 single “Stars,” Hum are one of the loudest bands you’ll ever see in your life, which only adds to the atmosphere of their space centric songs. Dealing out a skull flattening 45 minute set, Hum hit the hotspots of all three records, with the majority of the focus on 1995’s You’d Prefer An Astronaut. “Little Dipper,” that album’s opener as well as the opener of Sunday’s set, established Hum’s presence in Douglas Park like a flying saucer crash, a punchinthechest wall of guitars with vocalist Matt Talbott’s low, crooning lyrics about space travel riding smoothly over the noise. “I’d Like Your Hair Long,” “Coming Home,” “Green to Me,” “Suicide Machine,” and “Stars” sat well with the audience, and the only thing that would have made Hum’s return more exciting would have been a slot later in the day, when the lights and staging could have been utilized to greater effect alongside songs that evoked an interstellar vibe.

Riot Fest favorites Taking Back Sunday, having just headlined on Saturday, returned for a ‘surprise’ set on the Revolt Stage, the smallest in the park. Needless to say, word got out and led to one of the most jubilant and energetic sets of the weekend. Taking Back Sunday’s fans were rabid for the intimacy, singing, screaming, and crowd surfing their way through a thirty minute set of favorites (though it was rumored that the set would consist of all new material). The intensity of the crowd wasn’t lost on the band, fueling their performance from start to finish.

“Riot asked us if we’d do this set, after having played last night and being hungover and all, and we said sure, because we didn’t think anyone would come,” vocalist Adam Lazzara joked, and the band seemed genuinely delighted for the duration of the set. A playful cover of Nirvana’s “Territorial Pissings” fit right in with “Liar,” “Timberwolves of New Jersey,” and “Cut From the Team,” and as Lazzara made his way into the photo pit to stand on the barricade and commune with fans who crowd surfed all around him, it was clear why Taking Back Sunday have been invited back to Riot Fest they’re a band that truly comes to life on stage and devours every second of the experience.

Riot Fest has done a more than admirable job over the years of carefully considering diverse acts, and there was perhaps no better example this year than giving Rodrigo Y Gabriela a slot late in the day. Though the spanish guitar duo received more than a few puzzled looks from the crowd in my particular spot on the green, the confusion went away as the two burned through a jaw dropping set consisting of original material and heavy metal covers.

“Does anyone here like Megadeth?” Gabriela asked toward the beginning of the set, prompting one audience member near me to say, sure, like they’re going to play Megadeth. A blinding cover of “Holy Wars” from Megadeth’s 1990 classic Rust in Peace was one of the more stunning moments of the weekend, and covers from Metallica (“Orion” and “Battery”) and Rage Against the Machine followed. It’s tough to describe what makes a guitar duo as compelling as Rodrigo Y Gabriela were, as the pair’s unique approach to percussive strumming and solos is unlike anything you’re likely to hear at most fests. Perhaps even as impressive was the size of the crowd and the reception given one of the weekend’s best booking choices, bar none.

But for lovers of 90s alternative rock, Sunday boiled down one thing: L7. The female foursome’s return to the music scene after a near 15year hiatus has been the subject of much rejoicing, and their presence is needed in the current musical landscape where women are largely focused on manufactured pop or rap. For those who missed out on the riotgrrl movement of the 1990s and the proliferation of badass female rockers of that period, the return of Babes in Toyland and Veruca Salt in recent months was a promising sign that ‘women in rock’ was still a viable concept.

In that number, L7 are grungy, snarling royalty. Vocalist/guitarist Donita Sparks doesn’t look or sound one bit different in fact, it’s as though the band was cryogenically frozen in 2001, lying in wait for the scene to cycle through and return triumphant.

And return triumphant they did on Sunday night. Opening with bruiser “Deathwish” from 1990’s Smell the Magic, Sparks, along with bassist/vocalist Jennifer Finch, guitarist/vocalist Suzi Gardner and drummer Demetra Plakas led the crowd through a no holds barred tour of their early catalog. Largely ignoring their most recent two records (1998’s The Beauty Process and 2001’s SlapHappy), Sunday’s set was nothing but classics, with “Everglade,” “Shitlist,” “Fast & Frightening,” and breakthrough single “Pretend We’re Dead” serving as highlights. L7, in many ways, are like a female Motorhead no frills, classic power chord rock n’ roll minus the blues, with a nasty edge and a lot of crunch. In many ways, they’re a band that encapsulates the excitement of a festival endless energy, great songs, and a vague sense that anything could happen.

The band was in fine form, joking with the crowd and each other, and the assembled masses couldn’t get enough. “You still want it louder?” Sparks remarked at one point, indicating to the sound man, “fine. Turn it up. Blow their faces off.” “And blow their balls and titties off,” Finch added. “In a nice way.” What more could you ask for from one of the hardest rocking bands of Riot Fest 2015?