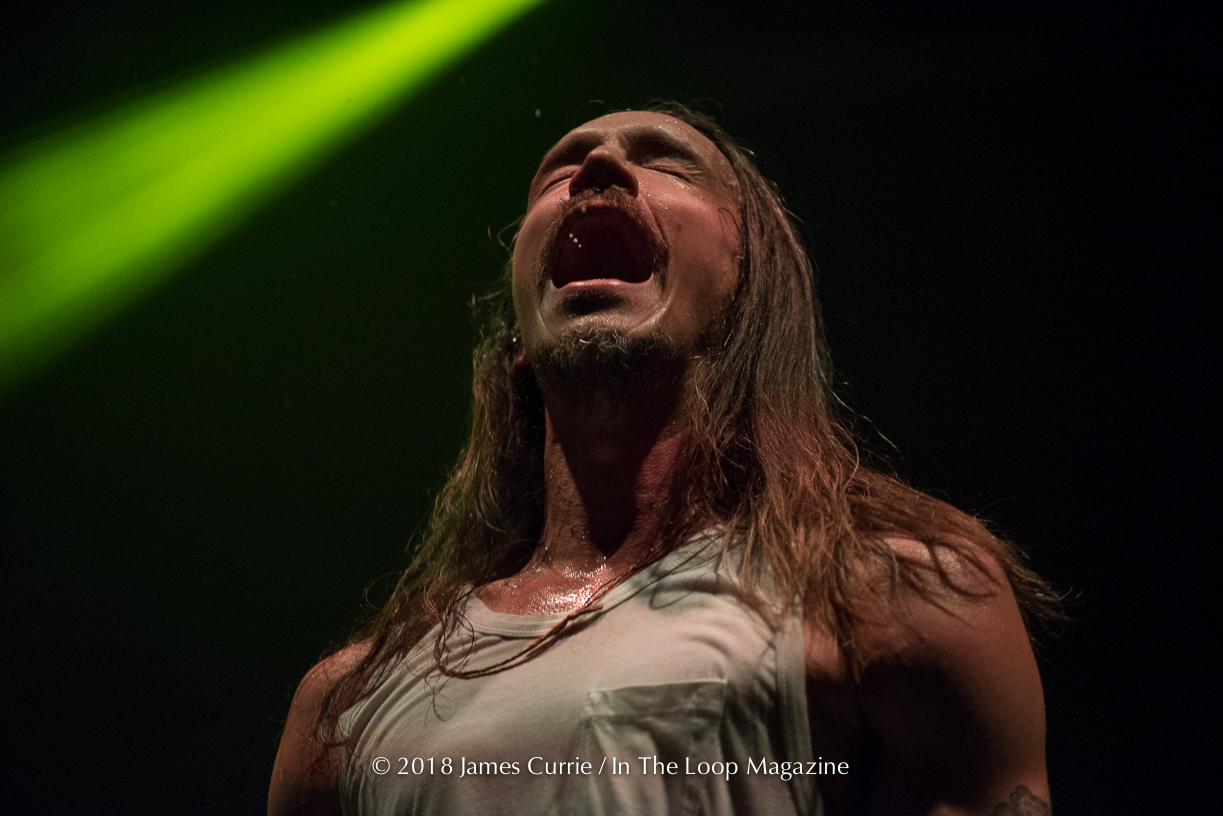 The third and final day of Riot Fest 2018 had a lot to live up to, and a varied lineup that brought both lifers and newcomers together offered something for everyone in the best possible way.

The day started as a stranger thing than Saturday. (I’m sorry. I had to.) Teenaged foursome Calpurnia, featuring Finn Wolfhard of “Stranger Things” and “It” fame on vocals and guitar, brought their unique blend of garage rock to a sizable crowd, with a sound that incorporated some elements of surf, punk, and classic rock n’ roll, particularly on opener “Wasting Time,” which sounded like it could have been a lost Buddy Holly gem. Guitarist Ayla Tesler-Mabe has serious chops for a seventeen year-old, and the whole outfit was promising and energetic. If their Scout EP is any indication, we may be seeing them at a future Riot Fest.

Speaking of classic rock n’ roll, JD McPherson’s three albums exist practically outside of time or era, and his live set reflected the best of his best material on that front. (The continuity of having Jerry Lee Lewis close Saturday and McPherson early on Sunday was sweet for those who caught it.) Cuts like “Head Over Heels” and “Let the Good Times Roll” were groovy, hooky slices of 60s-inspired pop that took on the better qualities of rockabilly and classic country, and McPherson’s voice has just the right amount of rasp, sneer, and sex appeal to make his music virtually impossible not to dance to.

Metal was in short supply this year, and while past years have seen the likes of Slayer, Anthrax, and Motorhead (in their final Chicago area appearance before Lemmy’s death), there wasn’t much by way of offerings for the thrash contingent. Bullet for My Valentine dropped a blast of nuclear metal on the mid-afternoon crowd, and the crushing rhythms were perfect for the unusual heat of a September day. “Your Betrayal” and recent single “Don’t Need You” from the band’s new album Gravity were blistering forays into the band’s signature mix of nu-metal crunch and bright melodies that called to mind the classic power metal of the early ‘80s. A strong mix of styles helps Bullet to stand out from many of their contemporaries; their set at Riot more than solidified their position as the year’s best metal/hard rock set.

Chapel Hill’s mighty Superchunk stormed the Radicals stage for a stellar set that bought the band’s usual balance of old and new, highlighting exactly why they’ve remained such an important voice for indie punk-pop for the last thirty years. While founding bassist Laura Ballance no longer tours with the band, Jason Narducy is the best replacement imaginable, and he fits right in with the inimitable Mac McCaughan (guitar/vocals), Jon Wurster (drums), and Jim Wilbur (guitar). Touring behind What A Time To Be Alive, the year’s most effectively political album, the Chunk tore through classics like “Slack Motherfucker,” “Hyper Enough,” the frantic “Package Thief,” and singalong “Driveway to Driveway” along with new tracks “Erasure,” “Reagan Youth,” and the bouncing title track for a nicely blended mix of tunes old and new – the fact that Superchunk aren’t in the Rock N Roll Hall of Fame yet is absurd, as they’ve proven to be one of the most important indie-rock bands on the planet time and again. (Maybe Riot can just have them back every year from now on to ease the pain.)

While Matt Skiba didn’t get the chance to pull double-duty at Riot Fest as originally planned, Alkaline Trio still delivered a killer set as the evening waned. With their new album Is This Thing Cursed? having been released just a couple of weeks ago, Skiba, bassist Dan Andriano and drummer Jarrod Alexander delivered a tight, punchy headliner level set with a good smattering of tunes from albums past along with new single “Blackbird” and the bright chorus harmonies of “Demon and Division.” Skiba has the unique position of fronting two bands with similar audiences and demographics, and his effortless ability to bend a great hook around a familiar progression was notable in classics “Sadie” and “Blue Carolina.” For a crowd who was undoubtedly disappointed by the loss of Blink-182 this year, Alkaline’s set had to be a grin-inducing shot in the arm.

As darkness fell on Douglas Park and on Riot Fest 2018, California alt-rockers Incubus took the stage for a set that leaned heavily on hits, atmospheric lighting, and singer Brandon Boyd’s soaring vocals. “Megalomaniac” and opener “Privilege” from 1999’s Make Yourself were tight rockers that had the crowd bobbing along through (ahem) clouds of smoke that permeated the air and drifted through the green and purple laser lights. Boyd’s voice has always been the popular focus of Incubus’s sound, and their riffs that move from classic, fist-raising professions to slightly off-kilter rhythms are often underrated, though you’d have never known it from the size of the crowd assembled at the Rise Stage. “Pardon Me” and “Drive” were immediately recognizable to anyone who turned on an alt-rock station between 1999 and 2001, and a cover of INXS’ “Need You Tonight” fit right in – indeed, for as celebrated as Eddie Vedder’s voice and persona have become over the years, it’s interesting to consider how Boyd’s is overlooked by popular music, despite the band’s success – their Riot set was a powerful reminder of Incubus’ strength and relevance.

Which could also be said for Riot Fest itself. Given the confusion over this year’s scheduling, timing, and the Ticketfly debacle that seemed to have months’ long complications, it was hard not to worry about the future of Riot Fest – but 2018 was one of the best years yet by a long shot, and it was clear from the enthusiasm of the crowd to the quality of the vendors and the unbelievable diversity of the lineup that its best days may be ahead of it, not behind it. Already considered by most of Chicago to be the “Anti-Lollapalooza,” Riot Fest is needed now more than ever during a time when festival attendance is flagging in some markets due to high ticket prices and over-saturation of artists. Screens around Douglas Park promoted Riot Fest 2019 throughout the weekend; who can even venture a guess as to what they’ll bring us just a year from now? (Roxy Music w/ Eno, British Sea Power, Slayer, and Ladytron are my votes, and you know you agree with me, Riot Fest.)