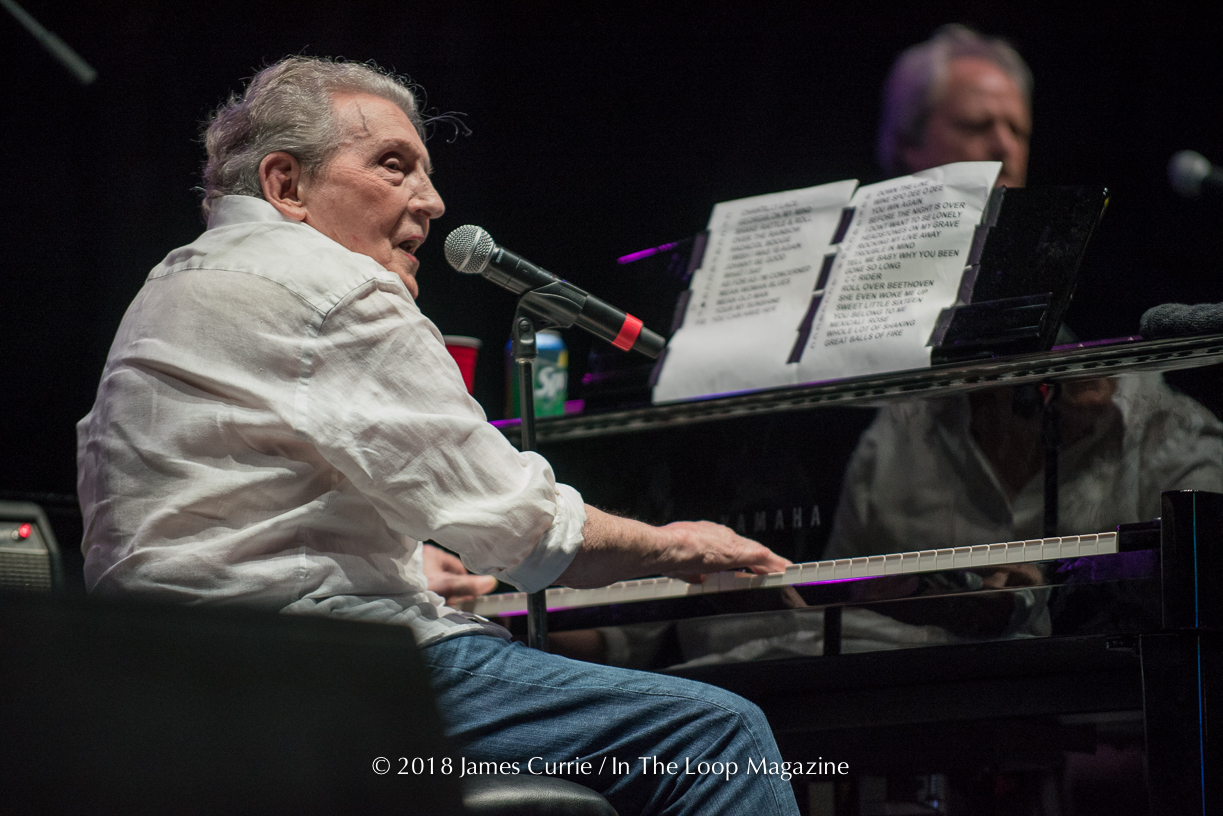 In recent years, has there been a more representative day of what Riot Fest can offer than Saturday? Probably not. Showcasing everything from rock n’ roll’s most legendary figure outside of Elvis, to yet another legendary Elvis, a pioneer in electronica, and all the atmosphere and cool of New York, Riot Festers got chance after chance to see some of the best live music out there.

Chicago’s own Beach Bunny started the day with their special blend of alt-pop, and if you weren’t able to catch them on the Riot stage, you’d better find them somewhere else in the city before they start to blow up, which seems inevitable given singer Lili Trifilio’s penchant for sweet, surfy melodies and just the right amount of guitar jangle. (Check out their Prom Queen EP on their Bandcamp site.)

Over on the Rise Stage, the leaves were burned from the trees by the sheer volume and fury of Mannequin Pussy, a Philadephia foursome, who fit right in with Riot Fest’s history of bringing new and classic punk together on the same stage. Vocalist Marisa Dabice alternates between tender whispers and shrieking fury, a force of nature onstage that we’ll surely (hopefully?) be seeing more in future Riots. Mannequin Pussy are the perfect blend of punk, ‘90s riot-grrl aggression, and pummeling live performance, and you’d better keep your eye on them – they have the natural chemistry of a band ready to do some damage, and they ramped the crowd up earlier than is usual.

A sunny afternoon in a wide-open field might normally have seemed like an out-of-place environment for an industrial-pop legend like the one and only Gary Numan, but down in the park (hehe), a crowd that spanned one of the day’s broadest demographics stood in awe of a set that leaned heavily on the electronic pioneer’s most recent record, Savage (Songs From a Broken World). Taking the stage in beige robes that called to mind the stark, desert-like imagery of the new record, Numan’s presence is huge, and thirty-two albums into his career (yes, you read that right), he shows no signs of slowing down. Delving into his back catalog for only a few choice nuggets (the ubiquitous “Cars” and “Metal”), Numan’s bravery as an artist who looks forward was in full-force, with one of the most powerful sets of the entire fest. (Check out our forthcoming interview with Numan for a look at what the future holds as well as some very special shows.)

After a suddenly announced cancer scare earlier this year, whether or not Elvis Costello would even appear at Riot Fest was in the air – but appear he did, and thank goodness, because we need him. Whether they know it or not, every indie rocker out there owes his or her livelihood to Elvis Costello’s unique brand of pop, rock, reggae, jazz, and every genre in between. Tearing through “Pump It Up,” “Miracle Man,” “Radio, Radio,” and deep cut “I Don’t Want to Go to Chelsea” all in the first half hour of his set, Costello was in great spirits and the Imposters were on point across the board; in particular, keyboardist Steve Nieve is always a pleasure to watch. When things slowed down a bit for “I Want You” and the midtempo “Clubland,” you got a greater sense of the breadth of Costello’s songwriting brushstrokes; for the most part, it was a rock set, and if anything, the collective desire for more after a timely rendering of “What’s So Funny Bout Peace, Love, and Understanding” was palpable.

Interpol’s new album Marauder is a tightly wound affair playing on the band’s strongest elements, and their shadowy, strobe-lit set as night fell on Day 2 was an atmospheric companion to their recorded work. A band whose presence is felt perhaps more strongly on record (live, there’s a peculiar dryness that belies the eerie quality of Paul Banks’ recorded vocals) the New Yorkers opened with “Not Even Jail,” one of the strongest tracks on 2004’s Antics, and dabbled in the new album with single “The Rover” and record-opener “If You Really Love Nothing.” Guitarist Daniel Kessler is the band’s live heart, moving about the stage with an effortless kind of cool, and a blue-lit rendition of the melancholy “NYC” toward the end of the set moved into anthem territory before closer “Roland” from the band’s 2002 debut wound things back up.

“The Killer.” Say those words to anyone familiar with classic rock n’ roll, and only one name can come to mind: the one and only Jerry Lee Lewis. Still touring at 82 years old, this was one for the books even by Riot Fest standards. Flanked by bassist Ray Gann and guitarist Kenny Lovelace, and backed by the awe-inspiring chops of drummer extraordinaire Kenny Aronoff, Lewis took the stage in a sequined jacket, untucked his shirt, and took his place at the piano with a shout of ‘oh,yeah!’ to pound out “Down the Line,” “Mexicali Rose,” “Before the Night is Over,” and set closer “Whole Lotta Shakin’ Goin’ On,” among others (and yes, there was a brief circle pit for “Down the Line”). It’s easy to dismiss artists of a certain age as simply wanting to capitalize on nostalgia, as though somehow their contribution to popular music means less as a result—but as anyone in the massive crowd to see Lewis could contest, at this point in his career, he has nothing to prove but the love for taking his place at the piano and continuing to deliver the roots of rock n’ roll to fans young and old, and there’s a beauty in that going far beyond nostalgia. The crowd felt it, and it was a moment of rare musical magic that transcended anything to do with genre, demographic, popularity, any of it – in a very real way, Jerry Lee Lewis is ultimately the only reason any of us were there in the first place, and when he raised his fist with a grin at the end of “Great Balls of Fire,” it wasn’t lost on anyone.

By the end of the night, it was going to take something truly special – a combination of spectacle and musical prowess – to reach a point of Riot Fest nirvana…and holy hell, did Beck deliver that in spades. Having taken his Colors promotional tour on the road opening for U2 last year, what may have seemed like a strange pairing actually made all the sense in the world now that he’s on the headlining stint, as the stage was a visual assault of optical illusions, seemingly animated floors and walls, and every other bizarre imagining under the Chicago moon as he delivered a hit-laden set in the best headlining spot of the weekend, bar none. Beck has evolved from a lovable stoner with an acoustic guitar to a world-class band leader more on par with Prince than anyone else – from the fuzzy grooves of opener “Devil’s Haircut” to the party-stomp of “Mixed Bizness” and the plaintive emotion of “Lost Cause,” Beck was all things to all people, strutting and dashing over a stage that looked like a spaceship’s deck in some psychedelic universe. In one of the weekend’s few surprise performances, Gary Numan returned to the stage for a performance of “Cars” that was right at home with some of Beck’s more keyboard-driven freakouts like “Wow” and “E-Pro, and as Day 2 came to a close with Odelay hit “Where It’s At,” it was a fitting end if ever there was one, as the only place to be was right-freaking-there in the middle of Douglas Park for one of the most memorable days in Riot Fest history.