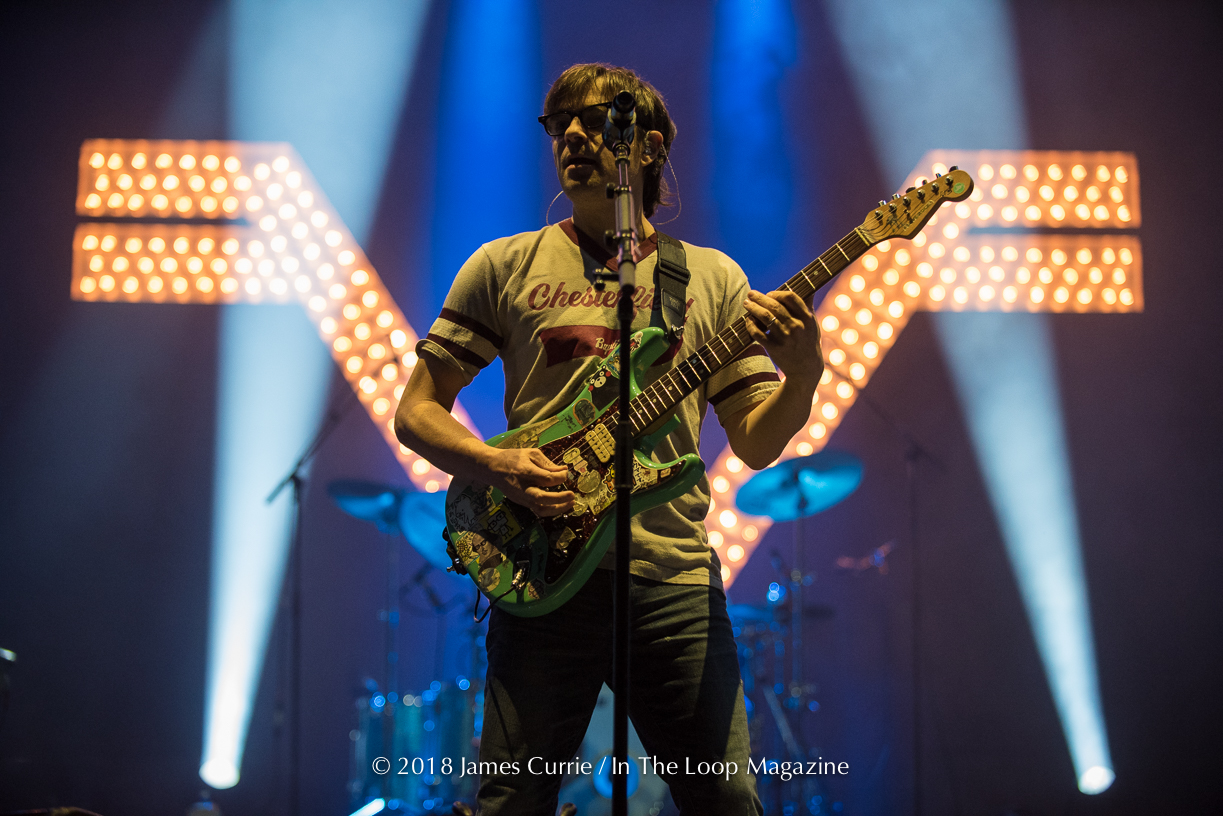 Naysayers, wind it down.

Riot Fest 2018 got off to an epic start on Friday after months of confusion and speculation about scheduling with some of its most consistent lineup flow in years.

Back-to-back sets from Speedy Ortiz and the legendary Liz Phair kicked the day off with some serious girlpower. Vocalist/guitarist Sadie Dupuis led her four-piece indie rock outfit through a half hour of choices track from Ortiz’s stellar new album Twerp Verse alongside earlier tunes like “The Graduates” and the noisy ebb-and-flow of “Plow.” Dupuis embodies the best elements of just about every ‘90s riot grrl – a flashy onstage persona, clever lyrics, and a beautifully maintained balance of melody and thrashy arrangements. Speedy Ortiz have been on tour with Liz Phair this summer, a perfectly complimentary bill of teacher and student.

The teacher, of course, was in top form and seemed almost surprised by the overwhelming response and size of the crowd. The queen of Guyville herself, Liz Phair, took the stage to uproarious cheers from one of the broadest demographics of the day, and small wonder. Few artists from Chicago have ever been so influential, especially within their own era, which itself has seen a sustained resurgence in the last few years; the love for all things musically-90s shows no signs of slowing down, and we’re better for it. If anything, the enduring quality of Phair’s message – equal parts brazen sexuality and knee-in-the-balls feminism filtered through jangly, rootsy pop – is more at home in 2018 than it ever has been, and the age range of the crowd reflected the overall connection Phair’s persona and delivery has sustained over her twenty-five years as an artist.

“It’s nice to be home!” she shouted before kicking into “6’1”” and hitting the hotspots of 1993’s all-timer Exile in Guyville (the boxed set anniversary edition of which, released earlier this year, should be a mandatory entry on any fan’s shelf). “I’m going to petition the city of Chicago to rename the Damen Avenue exit as ‘Exit to Guyville’ – what do you think?” “Fuck and Run,” “Divorce Song,” and “Stratford-on-Guy” followed, and while it would have been great to have heard Guyville in its entirety, that can’t be laid at Phair’s doorstep, as a forty-five minute set wasn’t nearly long enough to hold her legacy. The fact that Phair wasn’t given an actual headlining slot on Friday is beyond baffling; no one deserved it more. (Maybe we can hope for her triumphant reappearance for Riot’s 15th anniversary to correct that?)

One of the best sets of the day went to Canadian pop-punkers Sum 41, who were proof that, with enough time, a talented band will find its broadest audience. One of many acts who got huge following the Blink-182-led vanguard of pop-punk in the late ‘90s/early 2000s, Sum’s singles are stadium-sized anthems, and the giant, inflatable skeleton that appeared behind them as they stormed through singalongs like “In Too Deep” and a circle-pit inducing cover of Queen’s “We Will Rock You” just added to the full-on, hard-rock jublance of one of the day’s biggest gatherings.

As afternoon gave way to evening on a beautiful 80-degree day, Matt & Kim took the stage to giant beachballs against the Chicago skyline. A tornado of electro-pop energy, the duo barely sat/stood still long enough to belt out lyrics and a beat, rousing the crowd to a happy frenzy on one side of the field as Irish-American celtic group Flogging Molly drew a massive crowd around the corner. Vocalist/guitarist Dave King is a natural bandleader, and the setlist drew from the band’s twenty year history as King gave Chicago a shout-out.

“A lot of people don’t know this,” he mused, “but our first couple of albums were recorded here in Chicago, though I don’t quite remember!” The band toasted the crowd with Guinness before leading into a rigorous set that saw more than a few whiskeys raised in celebration.

When Blink-182 announced their unfortunate withdrawal from this year’s festivities, there could have been no more obvious fill-in than Taking Back Sunday, whose (dare I say) riotous sets are the stuff of Riot Fest legend. (The most legendary, perhaps, being their surprise appearance on the 2015 Radical Stage, in which everyone was lucky to make it out alive.) Vocalist Adam Lazzara is a top-notch frontman and a ball of energy every time he hits the stage; the band’s infectiously catchy tunes should be a staple on every alt-rock station’s constant playlists.

Irvine-based quintet Young the Giant brought perhaps the most interesting set of the day, with a sound that defies clear genres – there are elements of indie pop, at times a touch of Latin and ska rhythms, and lifting melodies that would fit nicely on even the most contemporary pop station. New songs “Superposition” and the lifting melody of “Simplify” from October’s forthcoming LP Mirror Master recalled the sound of their 2010 debut, and hits “My Body” and “Cough Syrup” had the crowd bouncing as the summer night fell and laser lights bathed Douglas Park. One of the most entertaining moments came as the band gave a nod to Blink-182 with a surprisingly faithful cover of “All the Small Things,” a song that “I played at my 7th grade talent show,” singer Sameer Gadhia noted. The varied instrumentation offered newcomers a chance to hear one of the most interesting bands at the moment, and long-time fans were likely satisfied by the well-rounded set.

As night fell on the last sets of the day, alt-pop stalwarts Weezer took the stage to crowd that reached to the middle of Douglas Park; endless singalongs to “Hash Pipe,” opener “Buddy Holly” and “Beverly Hills” ensued. Taking the stage to a giant W that (ahem) called to mind a certain Eddie-and-Alex-based quartet, Weezer were perhaps the most obvious festival entry of the day – their songs are immediately recognizable to a massive demographic thanks to a focus on radio-ready rock tunes after blowing up the alternative scene in the mid-90s. River Cuomo has figured out the formula of balancing un-ironic love for hard rock with a quirky, self-reflective style of songwriting that also has a sense of humor, and it was hard not to smile at tens of thousands of people singing along to a tune like “Pork and Beans.” If anything, it proved the staying power of the ‘90s alternative rock movement – a celebratory moment for the first day of Riot 2018 that put all worry over the fest’s future to bed.