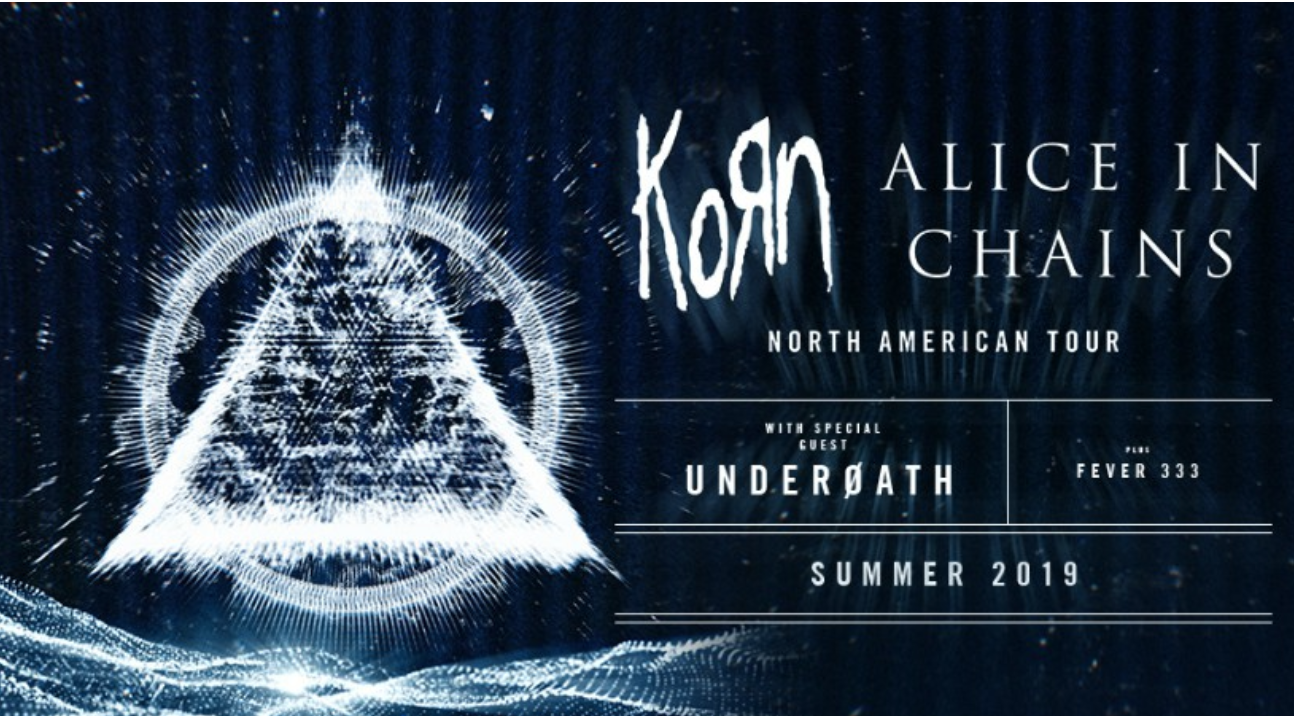 Jason Aalon Butler (vocals), Stephen Harrison (guitarist) and Aric Improta (drummer) of Fever 333 came out swinging to open the awesome night of music at Hollywood Casino Amphitheater in Tinley Park. The early crowd was welcomed to an intense ‘demostration’ of fever-pitched honest lyrics.

Jason Butler’s previous band, letlive., parted ways in 2017 and soon after Fever 333 was formed with Harrison previously of the Chariot and Improta of Night Verses. I have seen letlive. a couple of times prior and was instantly hooked. I knew that Fever 333 would be just as intense and fun to watch and the crowd definitely was into every song. Each song confronts many of the current situations that society is going through. From racism, police brutality, immigration and wealth inequality just to name a few.

Not only does the band love getting the crowd into the movement through their music, but love to join the crowd. Jason and Stephen head into the crowd and got the crowd more riled up, while Aric jumped onto his drum seat yelling at the crowd before he jumped down hitting his drums with his sticks in ultimate precision.

Next up on the stage was Underoath, the hard-hitting metalcore band from Tampa, Florida. The band’s current lineup consists of Aaron Gillespie (vocals and drums), Christopher Dudley (keyboards and programming), Timothy McTague (lead guitar), Grant Brandell (bass), James Smith (rhythm guitar) and Spencer Chamberlain (lead vocals). With all the concerts I have seen, this was my first time seeing them live.

Underoath started their set with “On My Teeth” their first single from their latest album Erase Me that came out last year. They picked up right where Fever 333 left off. Straight to your face drum beats and crunching guitar sounds accompanied by intense lyrics. Their show was filled with loud and precise playing, while all the band members showed their high-energy performance from the beginning until the end of their set.

Underoath’s set consisted mainly of songs from their latest album Erase Me, while they threw in “Writing on the Walls” back from 2006. They definitely kept the screaming crowd entertained and were proud to announce that they were working on some new music. Which brought more cheers and yells of joy from the audience.

Next on the bill was Alice In Chains, doing their co-headlining set. They opened up to the screaming fans with a one-two punch of  “Angry Chair” and “Man in the Box”. Two songs greatly composed by the late Layne Staley. William DuVall has taken over the vocal duties of the band and has come into his own with them. Jerry Cantrell (guitar), Mike Inez (bass) and Sean Kinney (drums) round out the lineup.

There was not much time for talk as the band played one song after the next, with hardly any long speeches in between the songs. Alice In Chairs are one of the tightest sounding bands I have seen live. The crowd was definitely into it as you could hear them singing many of the choruses.

DuVall’s sang with the same passion of the post-Staley songs as well as the ones that the crowd loves from the 90’s. Cantrell’s calm playing made his formable years of playing look easy of only a man of his stature could do. Sean and Mike were in sync with each other the whole night as the lights and visuals on the video boards behind the band kept up with them.

After the high-intensity bands before Alice In Chains, it was nice to hear the grungy legends slow it down while keeping the crowd jumping around and singing in unison. For their closing songs, they brought the crowd back to their 2nd album with the songs “Would?” and “Rooster”.

A huge curtain was positioned in front of the stage to block the audience from seeing how the stage was set up. The crowd got louder as they heard the crunchy guitars and drum beats with the curtain still up. Not that the crowd needed any direction, but when Jonathan Davis yelled, “Here we go!” the curtain dropped and the crowd’s cheers turned into roars.

Deadlocks were flowing in the air from the various members in the band as the strobes and lights flashed, brightening up the thousands in attendance. Ray Luzier, drummer, got the crowd more excited when he started off taping on his cymbals at the beginning of the band’s first single “Blind” from their self-titled album back from 1994. Hearing the song brought back a lot of great memories from when I first saw them at The Party Gardens in Phoenix, Arizona.

The crowd definitely enjoyed hearing the song “You’ll Never Find Me”, from their forth-coming album The Nothing, played live for the first time in Illinois. The light show was just as intense as the song was. It was a great addition to the setist and it could become a staple in their future live shows. A Korn concert would not be complete with Jonathan Davis not playing his bagpipe at the beginning of “Shoots and Ladders”. As a kind of homage to Metallica, Korn ended the song with a little part of Metallica’s “One” and quickly kept the intensity up with jumping right into “Got the Life”.

As Korn always keeps the crowd interactive and entertained they played “Coming Undone” with the well-known song “We Will Rock You” by Queen. They closed out their great fifteen-song setlist with “Falling Away From Me”, as many people in the audience moshed in front of the stage and in the lawn. It was an incredible lineup of bands with different genres coming together to rock one of the last nice days of the summer.