Returning To Chicago For The Third Time This Year, Courtney Barnett Plays Sold Out Show At The Riviera Theatre 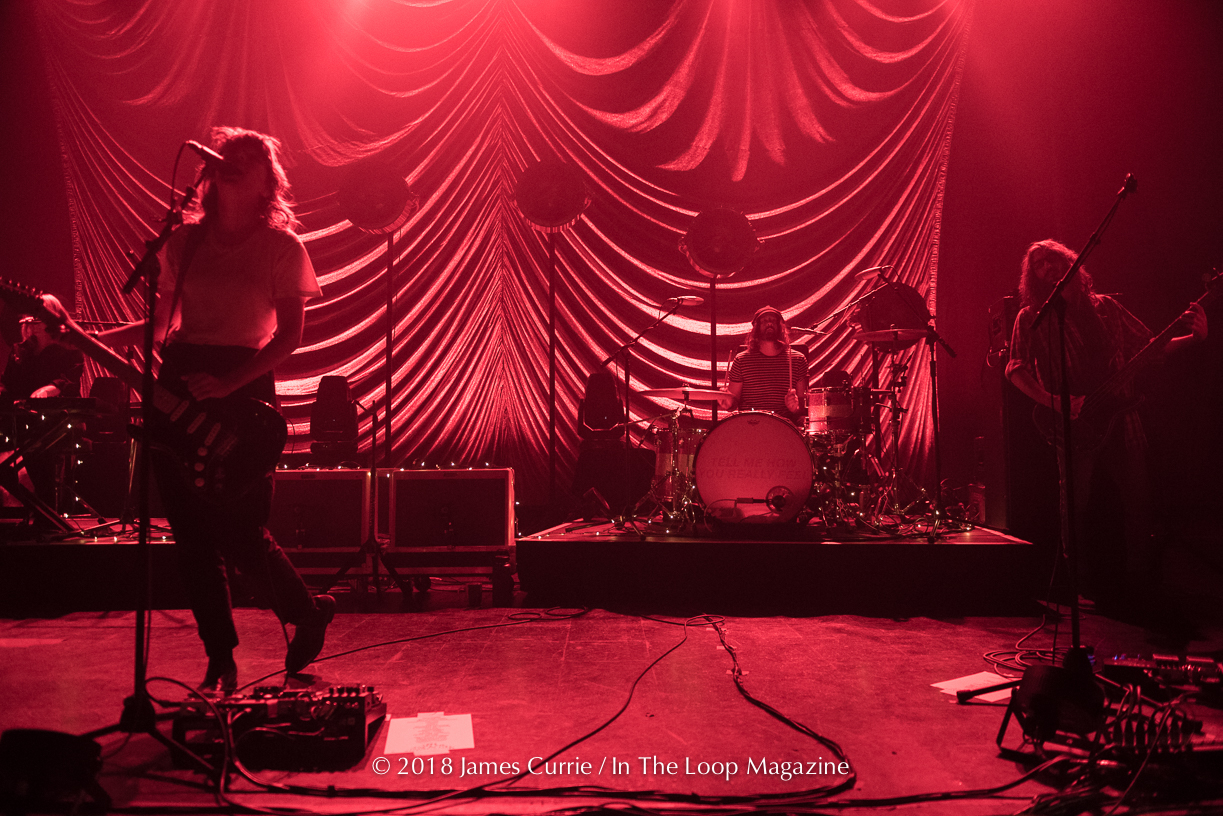 We can’t say this enough, how does Courtney Barnett do it? It seems Ms. Barnett is always on tour or at least a perpetual one that seems to gravitate back through town very often. She comes through Chicago at least twice a year (3 times this year so far) and with each one, she constantly delivers. Courtney Barnett and The Courtney Barnett’s (or CB3 if you’re an ol’ skool fan), the band from the land down under, seems to have made Chicago a segregate home as she has said how much she loves it here by shopping for guitars, the food and the lifestyle. And the audience would agree as they still pack the house each time.

Tonight, the CB3 performed at the uptown venue, The Riviera Theatre. Another sold out show for the Courtney, Bones and Dave. This is the perfect venue for them. It’s just the right size. They have enough room on the stage to cut loose and the fans are right there.

The show started with deep red lights beaming down from the rear rafters just over Barnett giving a warm glow silhouette. Later, large round classic theatre spot lights rimmed the back stage area pulsing white lights in rhythm of the songs. The stage was set with Barnett in front flanked by the rest of her band behind her. On her right, was a fairly new live member to the team. Katie Harkin was on the keys and backing vocals. She’s been with Barnett during the live performances most of the past year and has returned with great fanfare. She’s a wonderful addition to the live sound giving that extra fill where needed. Behind Barnett is her long time drummer Dave Mudie and next to him is her other long time member Bones Sloane. These two really complete her sound. They are discrete, solid performers and round out the CB3 sound to what we’ve all come to love.

They started the show with “Hopefulessness”. The opening track of her latest album, “Tell Me How You Really Feel”. After which, the lights warmed up fully and followed the bands sound as they rolled right into the second song off the same album, “City Looks Pretty”. Which of course we all take as meaning her view of Chicago. A surprise was next, as she ripped into the song that brought her to mainstream, “Avant Gardener”. The always fan favorite was played earlier than usual in her set and worked as it kept the crowd jumping for more. Barnett continued through 18 songs in total before taking a break, then they came back and did three more ending with her neo classic, “Pedestrian at Best”.

One thing I’ve noticed after attending so many Courtney Barnett shows is the audience and fans. In the beginning, back when she was playing basements and tiny club stages, it was just the local bar patrons mixed with college radio listeners. Then she blew up and became a festival darling playing gigs like Lollapalooza and Pitchfork. Now she’s in the venues that the mass majority of music fans likes going to the most, a classic old all setting with great sound and not a bad view in the house. But there is a new twist in the attendance I hadn’t planned for. Preteen girls. At least at this particular show, there was a substantial increase in dad and daughter pairs. Most notable in the front and lower bowl areas. Not that this is a bad thing, just a slight departure from her otherwise college, hip, music fan base of before. One fan sporting a #MeToo movement t-shirt and others copying Barnett’s classic look of white t-shirt and black jeans with boots. Barnett has really diversified in the past few years.

I’ve really enjoyed seeing Courtney Barnett grow from that unknown Indie artist to a true rock star and now it seems a cultural icon. Her music just keeps growing as well. The band keeps tight. They seem to keep having fun with it. They’re just one of those great bands to get out and see live. I myself always look forward to another performance from them. I’d be happy if they want to make a forth stop back before finishing out the year.

For photos from the Courtney Barnett show live at the Riviera Theatre in Chicago, click here