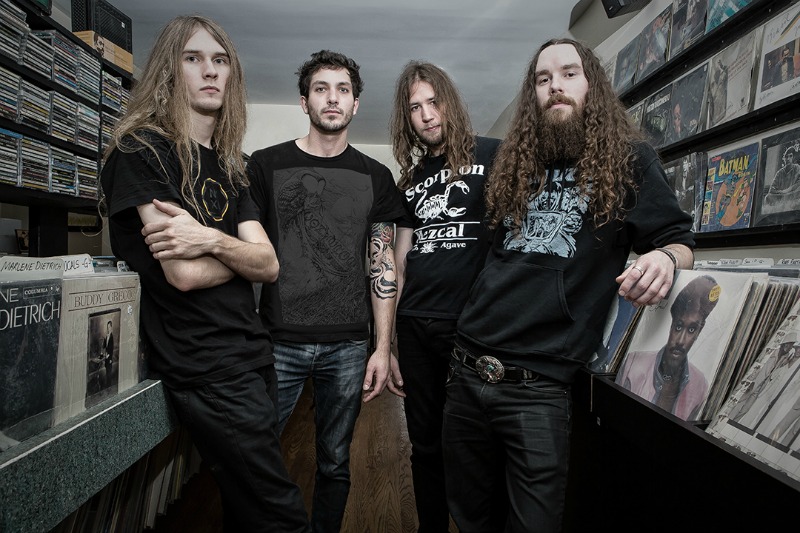 If ever there was any question that Chicago is home to more shows than one can possibly attend on any given date, Reggie’s Rock Club on Wednesday was a perfect illustration: a five-bill of thrash and death metal, smack in the middle of the week, headlined by Boston’s Revocation, with St. Louis’ Black Fast in support (also appearing were Cannabis Corpse, Roman Ring, and Archspire).

To cut right to it, Black Fast give me hope for the future of “classic” thrash metal, and the band’s star is rising, fortunately, following the release of their latest record, Terms of Surrender, on the eOne label. Making good on the promise of 2013’s Starving Out the Light, Terms pays homage to the precise, frantic riffage of bands like Kreator and Sepultura, with vocalist Aaron Akin’s searing delivery calling to mind a thrash version of Blackie Lawless or the king of razor blade vocals, Mille Petrozza.

From opener “Haunted Vigil” to closer “The Fall,” (introduced as their ‘ballad,’ which, of course, was nothing of the kind) the band was relentless for their half-hour slot, with Akin’s natural stage presence leading the way through their alltoobrief five song set. It’s easy to see when a band is truly hungry and desires nothing more than to level a room as though their lives depend on it, and Black Fast proved, for their first proper touring date in Chicago, that this is a band who is in it for the long haul. Here’s hoping we see them headlining their own tours sooner than later. They sure as hell deserve it.

Revocation, touring in support of 2014’s Metal Blade release “Deathless,” kept the spirit going and took the near capacity crowd on a tour of their technically proficient mix of death and thrash metal for a solid, searing hour. The set pulled no punches, leaning on the new record for “Madness Opus,” “Scorched Earth Policy” (marking only its third live performance), and closer “Witch Trials,” pulling from 2009’s Existence is Futile (to the clear delight of fans) for “Leviathan Awaits,” and even going back to 2008’s Empire of the Obscene for “Alliance and Tyranny.”

Vocalist/guitarist David Davidson’s proficiency can’t be overstated; his background in jazz serves him well in the capacity of soloist, giving the songs an energy and melodic element that recalled early Metallica (specifically, Kirk Hammett’s more thoughtful, borderline progressive moments on records like Ride the Lightning and Master of Puppets). Revocation’s rhythm section met the challenging arrangements head-on, allowing for the staccato brutality of Davidson’s riffage to really come through, mirroring the records with an added layer of face melting volume and intensity.

Tired media claims that “rock is dead” needed look no further than this current Revocation tour, and Reggies was the perfect room for a perfect bill showcasing the next generation of thrash superstars.