Raven’s ‘Undeniable Sound’ a Brilliant Homage to Music’s Past 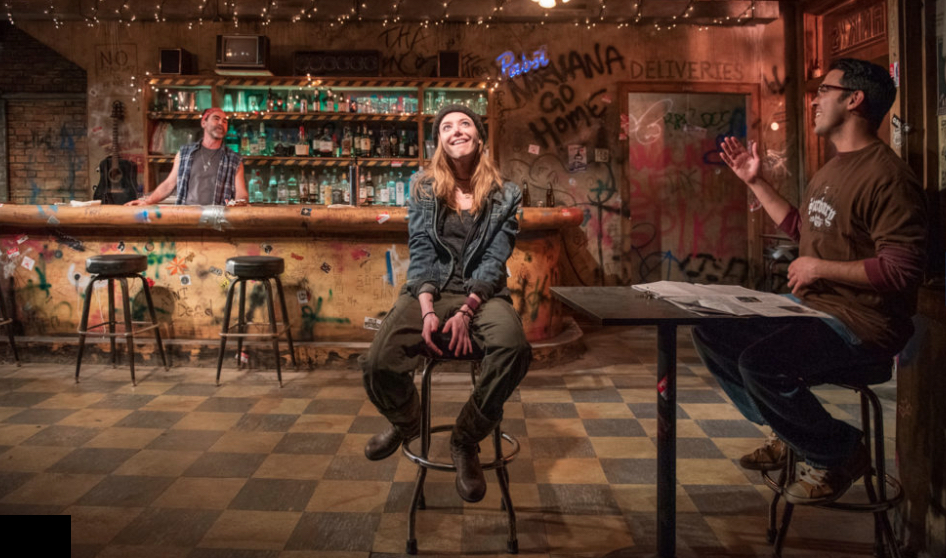 Hank owns a bar – appropriately named Hank’s Bar – where he has jumpstarted the careers of some of rock music’s most notable acts. From The Rolling Stones, to Kiss, to Fleetwood Mac and Nirvana, the grungy Chicago dive is legendary, but can Hank keep his establishment relevant as his city – and the musical landscape – undergo a revolution of their own in 1992?

Such is the setup for “The Undeniable Sound of Right Now,” the wonderful Laura Eason play that is receiving its Chicago premiere at the always excellent Raven Theatre. Expertly directed by the ever-capable BJ Jones and perfectly cast, “Undeniable Sound” strikes a remarkable balance with its tone and pacing across a briskly paced 90 minutes.

The key is that Eason and Jones’ cast get all the details right: as the stubborn, irascible Hank, Jeff Mills is every bit the aging rocker – a very accomplished (and very frustrated) visionary who is utterly unwilling to accept that the Gen X crowd has moved on to fresher sounds; as Lena (Hank’s daughter), Lindsay Stock is passionate and eager, torn between her love and respect for her dad and her realization that the music scene has passed him by; and lastly, as Nash (a popular DJ/Lena’s love interest), Henry Greenberg is charismatic and his own unique brand of irascible, someone who is blazing a path forward and may burn a few people on his way. Through it all, they are supported by a dynamite scenic design from Eileen Rozycki (this is truly a dive bar, from the graffiti to the wood carvings to the crappy chairs).

Working together, the cast and crew bring the audience back to the early ‘90s, a time when rock music’s supremacy was being threatened by the fresh, young sounds of electronic and house music – and by no sheer coincidence, vast urban stretches were also gentrifying, as the fans of those young sounds returned to the city in search of cheap rents and fresh thrills. So while there is plenty of music in “Undeniable Sound” – Mills is an excellent guitarist, and regularly strums both acoustic and electric guitar during scenes – Eason is too smart a playwright (and Jones too savvy a director) to limit the scope simply to the music; rather, they recognize that musical styles are birthed by unique circumstances, and that just as those styles privilege certain experiences, they also render others obsolete.

And in the end, I left the theater appreciative of both Lindsay Buckingham and DJ Shadow, of Billy Corgan and Frankie Knuckles. For they all are part of this vast musical history, and can – despite Hank’s insistence otherwise – exist in the same artistic ecosystem.