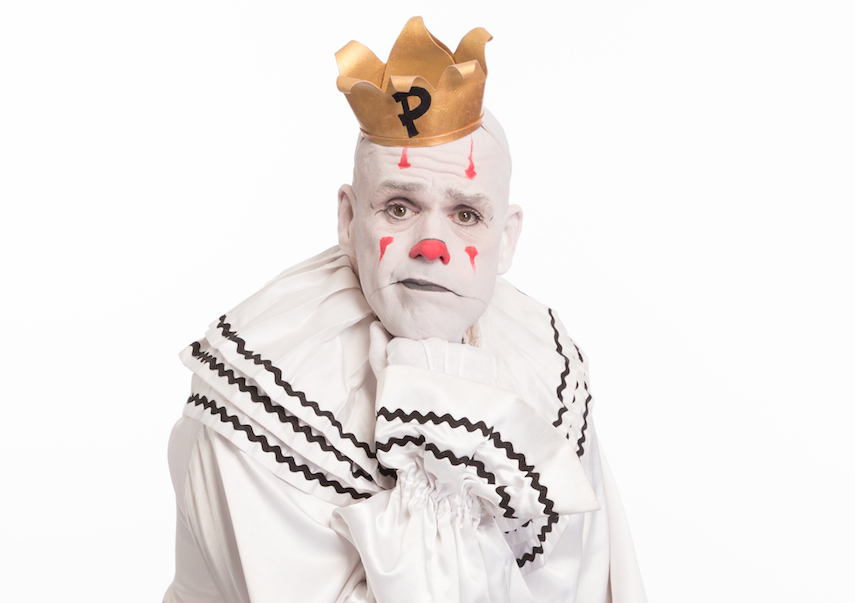 The giant of a man with the sweet southern charm behind the face paint and clown costume is Mike Geier. He was born in Philadelphia, Pennsylvania and his parents moved his four sisters and two brothers to Richmond, Virginia when they were younger. He now stands 6’8”, while all his siblings are at least six feet tall, giving him the nickname “Big Mike”. Mike is the fifth of seven children and denotes that he grew up in a houseful of giants. In the early 1990’s, his entertainment career started as he fronted the Swing Noir band called the “The Useless Playboys”. Mike’s journey took him down to Atlanta, Georgia in 1995 where he started the band “Kingsized”. Since then, he has worked on a wide variety of roles appearing on FOX, ABC, NBC, Cartoon Network, Adult Swim, Turner South, MTV, Playboy TV, PBS and in the movie “Good Intentions”.

Mike’s latest adventure is his onstage persona as Puddles The Clown. Puddles became an internet sensation with his dramatic rendition of Lorde’s “Royals” accompanied by the band Postmodern Jukebox. Puddles is known as the sad clown with the golden voice that wants to be loved, which he got a lot of love from the Park West crowd. Puddles began the show walking through the seated crowd to the stage with a lantern and his suitcase in tow. He sat down in a chair on the stage as he read a Rolling Stone magazine, while chewing pieces of gum that he continued to pop into his mouth over the eight minutes flipping through the magazine and listening to music that was played throughout the venue. The crowd waited in anticipation watching his mannerisms and wondering his next move, since the only time he speaks is when he sings with his grand baritone voice.

The night incorporated Puddles performing along various recorded songs interlaced with comedy acts while he brought up various audience members to join him on stage. The songs were a wide variety of old and new: “Stressed Out” by Twenty One Pilots, “Royals” by Lorde, “Rock ‘N Roll With Me” by David Bowie, “Dancing Queen” by ABBA, “Under Pressure” by Queen and “It’s Now Or Never” by Elvis just to name a few. Also accompanying the songs were videos that were projected onto the screen as the backdrop. One of the first crowd participates who was brought up seemed to be apprehensive at first. Maybe it was because there was a room full of people, or it could have been for the microphone that was adjusted in front of him. You could feel the tension in the air for him as we all realized that he was going to do a karaoke version of Céline Dion’s song “All By Myself”. The tension soon disappeared as Puddles got up from his chair during the song and had the whole crowd singing along.

The hour and a half show was perfectly entertaining because of Puddles’ comic timing of keeping the audience on the edge of their seats with laughter and joy. Many of the gags caught myself laughing out loud and hearing some of the crowd hooting and hollering. Puddles’ received a standing ovation at the end of the show giving our love and appreciation. He ran to the lobby giving hi-fives as he passed where people were lining up to get a photo op and a cuddle from our entertainer of the night. Puddles did not break out of character throughout meeting the audience during “Cuddles With Puddles”. This was truly an entertaining night with the hopes of seeing this show the next time he is in town.

For more on Puddles Pity Party including tickets to upcoming shows, click here