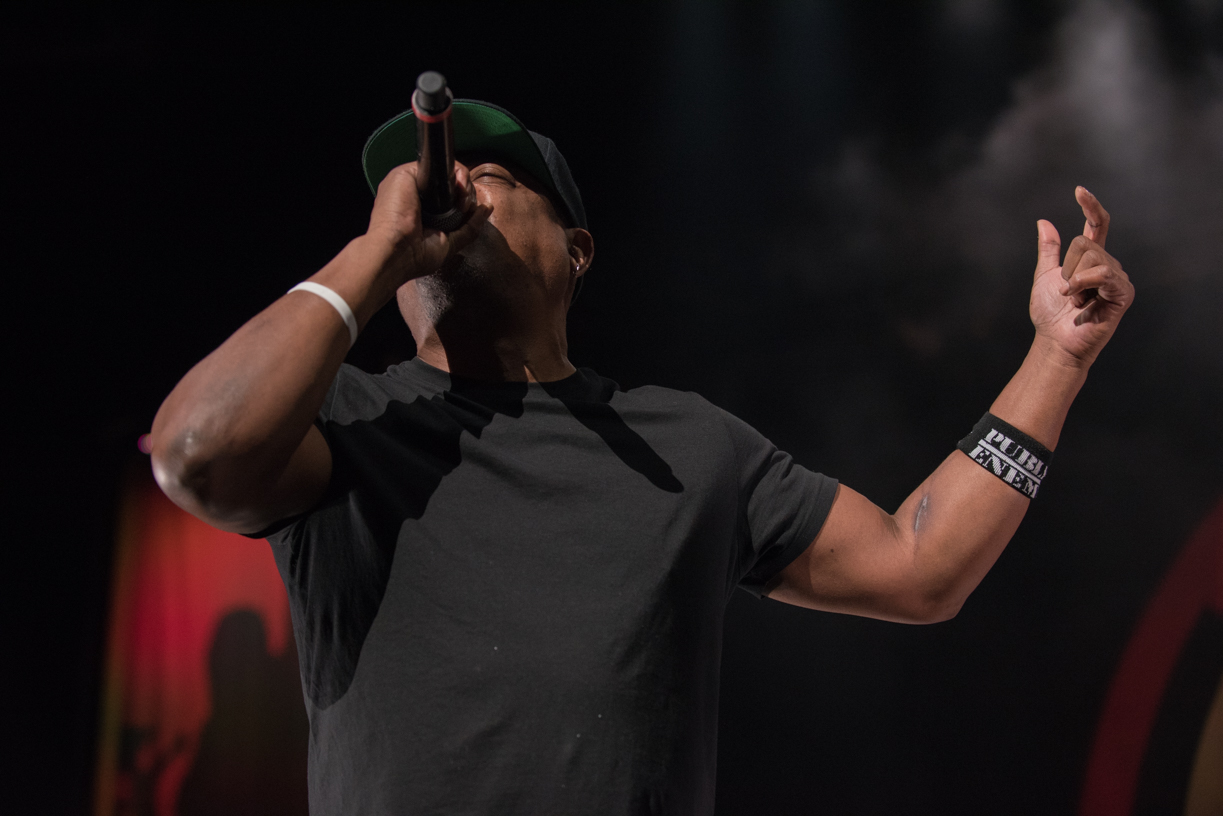 Prophets of Rage debuted their new project to the Chicagoland region this past Saturday night with an explosive set covering material from Rage Against the Machine, Cypress Hill, Public Enemy, and even a cut from the legendary Beastie Boys and MC5. Their show at Hollywood Casino Amphitheater in Tinley Park, IL was explosive, energetic, intense, and downright fun.

As a long time RATM fan this show was exciting for me. I grew up in the height of the late 90’s. I was 13 years old in 1998 meaning that I just missed the Grunge era explosion. It was around 1996 and 1997 that I started to become interested in what was then considered modern rock, but I had just missed the height of bands like Nirvana, Pearl Jam, Phish, Soundgarden, etc. Instead I was getting KoRn, Rob Zombie (not White Zombie), Britney Spears, Limp Bizkit, and of course the ever so popular Backstreet Boys and NSYNC. Not to speak negatively towards any of those bands, (I still love KoRn and Rob Zombie), but you can see why RATM fit really well into my catalogue of music back then. I was an angsty teen with a lot of, well, rage growing up. So naturally I fell in love with RATM.

Fast forward to today. I had never seen any of these musicians perform live so I felt as if I was living out a childhood dream. AWOLNATION opened up the night with set full of high energy. It was easy to tell that these guys are professionals and do this for a living. They worked as hard as they could to get the crowd fired up. The most surprising and satisfying performance from the band came from their drummer Isaac Carpenter. He seemed to combine the the styles of multiple killer drummers into his playing. I saw a bit of Travis Barker in his performance, but could also see his influence from bands like Led Zeppelin, System of a Down and Motorhead. I don’t know if Isaac actually likes those bands or not, but his playing surely resembles it. AWOLNATION did a great job opening up what turned out to be a crazy, high energy show.

Then Prophets of Rage took the stage. DJ Lord started out their set with a huge mashup of awesome covers. He was trying to get the crowd riled up and did just that. I think I heard everything from Queen/David Bowie to The White Stripes, Aerosmith, and even “Eye of the Tiger”. The opening DJ set was fun and high energy, and DJ Lord at one point started “shredding”. I don’t exactly know how to explain how a DJ can “shred” like a guitar player, but he did it.

Soon after, Tom Morello, Chuck D, BReal, Brad Wilk, and Tim Commerford walked out to the stage. I wasn’t too sure what to expect. I knew what I was getting into but wasn’t quite sure how they were going to pull off RATM songs without legendary frontman Zack De La Rocha. Sure enough, though, Chuck D (Public Enemy) and BReal (Cypress Hill) came out swingin’. The two clearly had done their homework. They passed different lines of verses and choruses back to each other. At times, BReal would take over a verse, and Chuck D would double him, which worked out very well. The two of them kept the crowd engaged and pumped up. Needless to say they very much so “pulled it off” by absolutely crushing famous RATM songs like ‘Killing in the Name’, ‘Guerilla Radio’, and “Bulls on Parade”. One thing that was important to me was hearing the vocal lines performed as much like the originals as possible. They did exactly that. They kept the integrity of the parts in tact while putting their own flavor into the songs. At times I was in awe with how cool it was to hear BReal ripping on RATM tunes.

I was also excited to see how Brad, Tim and Tom would play Cypress Hill and Public Enemy songs. And, well, they nailed them. “(Rock) Superstar” was out of control! Occasionally we would get a little Audioslave teaser too. At one point I heard the guitar solo from the song “Like a Stone”, and heard the “Cochise” riff in there somewhere. In the middle of the show Tom, Tim, and Brad left the stage and gave Chuck D, DJ Lord, and BReal a chance to perform a medley of hits including “Insane in the Brain”. The combination of these songs all in one set was so damn entertaining. Towards the end of the show they busted out a cover of “No Sleep til Brooklyn” by The Beastie Boys that got the entire venue going wild.

This show was special for multiple reasons. Both Tom Morello and Brad Wilk grew up in the Chicagoland region. According to Morello, he had moved to California from the Chicagoland area 30 years and one day prior to the show. To share the stage with some of his heroes and best friends must have been extremely satisfying. To tie it all together, Tim McIlrath, frontman of Chicago hometown punk rockers Rise Against joined the band on stage near the end of the show for lively cover of MC5’s “Kick Out the Jams”. The energy was high, and the crowd was higher.

Finally, the overall message of the tour spoke loudly and clearly. “MAKE AMERICAN RAGE AGAIN”. Their merch, stage setup, etc clearly specified for whom NOT TO VOTE this year. Their red hats with their slogan in white lettering across the top helped explain that message loudly and clearly. The presidential candidate in question (who is so despicable that he does not deserve the attention and or mention in this article) was made very obvious. The state of unrest and dissolution in our country has become the fuel for Prophets of Rage, and I must say that it is very inspiring to see these guys continue to use their voice for a positive purpose. On the surface it is easy to think that Cypress Hill and Public Enemy songs bring out a message of hate or disruption, but the context makes all the difference. This show had exactly the opposite message. Through the music of Rage Against the Machine, Cypress Hill and Public Enemy, they shouted their message of love, peace, and hope very loudly. At the end of the day Prophets of Rage are sharing the same message of peace and love that so many others have shared in the past. The Grateful Dead, Phish, Bruce Springsteen, etc. It’s all the same, with different content.

In one way or another they’re screaming for justice and equality. Prophets of Rage are bringing people from different backgrounds, nationalities, races, etc together in solidarity for the purpose of peace and tranquility, and they’re doing it in the most badass way. Make America Rage Again. Count me in.

For more on Prophets of Rage, including the current tour, latest album and members, click here

For more on AWOLNATION, including the current tour, latest album and members, click here

For photos from the show featuring Prophets of Rage, click here

For photos from the show featuring AWOLNATION, click here