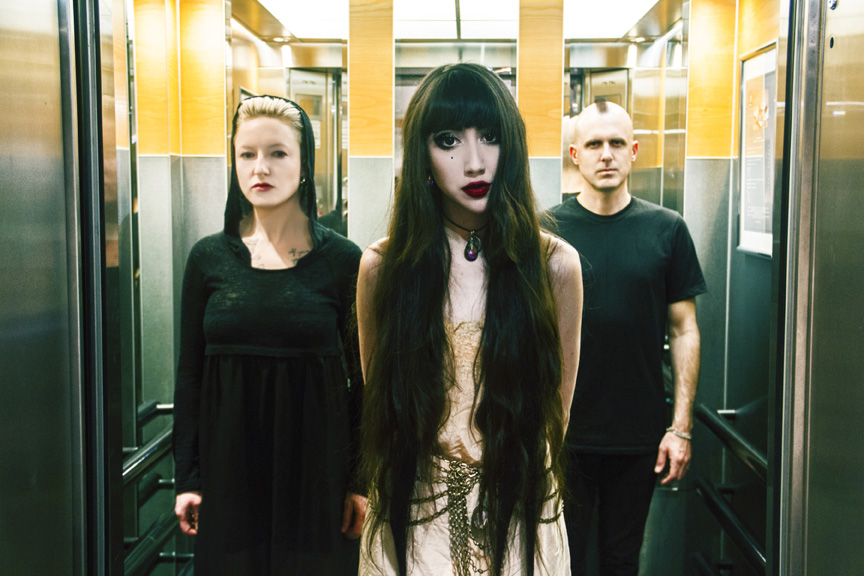 Postapocalyptic Gypsy Punk singer / songwriter, Ciscandra Nostalghia, leads new ground with her band, Nostalghia, a three piece from California. Formed in 2012, Nostalghia have toured extensively bringing their kaleidoscopic cadence to a gaining audience through major headliner support and music festivals around the world.

Earlier this year (2014), Nastalghia released their first full length debut album, “Chrysalis”. It extrudes a kind of controlled chaos. An emotionally charged, psychotic web of beautiful melodies with haunting vocals. From first impressions, you’ll catch sultry traces of Kate Bush, Tori Amos and Bjork, but those are soon smashed in with the magnetic shrills of Kurt Cobain, Perry Ferrell and Peter Murphy making something totally new and distinct to their own.

The 11 track record, “Chrysalis”, is produced by New Orleans based, multi-platinum producer, Dave Fortman. Fortman, also an engineer, mixer and guitarist for the rock band, Ugly Kid Joe, lends his talents to this experience. He has helped to capture the essence of such groups as Evanescence, Anthrax and Slipnot for the last decade.

From their website, “Nastalghia transports it’s audience into a cathartic dimension; it is a journey that not only leads its audience into a spiritual state of feeling, intensity and passion, but also directly into the face of the unknown.” The piano, cello and drum driven cinematic goth pop tunes come to full effect when Ciscandra’s voice tears through it.

Multi instrument guru, Roy Gnan takes commands much of the trio’s textured sounds. Not just a percussionist, but also helms the ivory keys, computers and special effects, especially during live performances. The touring cellist, Adele Stein, maintains the ghostly melodic bellows brought to life from the stroke of her rosined bow. Together, Nostalghia create one masterfully divine swirl of emotionally bewitching interludes as only they can.

This is a group not to be missed live. Nastalghia continue to tour throughout the summer and fall.   You can, and should, catch them at any one of their stops happening coast to coast. Here in Chicago, we can see them at Riot Fest in September, when they will no doubt continue to amass a following and absolutely compliment the already impressive line up.