Pierce The Veil Create More Than Misadventures In Chicago 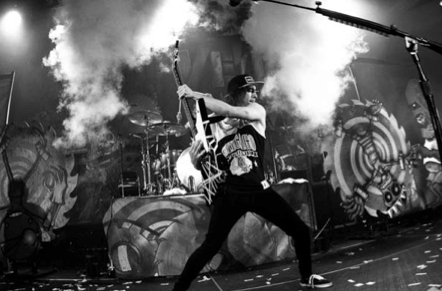 California’s Pierce The Veil have been at the alternative scene for a decade now and their strength and musicianship is as strong as it’s ever been. With the release of their latest album, Misadventures, the post-hardcore quartet stopped in Chicago recently in support of their fourth and highly popular release. The group also brought SoCal post-hardcore and fellow labelmates, Movements as well as also out of California, progressive and post-hardcore quartet, I the Mighty. A huge turnout for every act, the night really surpassed the expectations held, a huge surge of energy from all the acts in addition from the packed Chicago crowd.

A sold-out show at the House of Blues, I the Mighty opened the night with one of their more familiar hits, Lady of Death. Also in support of a new album, Connector, the track easily drew in attention from all eyes. It seems like artists from this genre, tend to have a lot of fans in common as there was major support and participation from the fans for each and every act that night. Other tracks from I the Mighty included Playing Catch With .22, Psychomachia, Slow Dancing Forever, and closed out with Cutting Room Floor. The group also played a handful of other tracks as well from other albums.

Next up were SoCal labelmates, Movements. New to the scene, the California rockers were in support of their debut EP, Outgrown Things, which was released in March of this year. Many call the EP a breath of fresh air into the post-hardcore/emo scene, a rave performance the group certainly showcased at the House of Blues. Playing their EP in full, the performance certainly proved that they do have a certain sound and stage presence as well as that fresh breath of air into the scene. After their solid performance, the group should be on everyone’s radar, watch out as they are already on the rise.

The main act of the night, Pierce The Veil, wasted no time in taking the stage. A unique performance, with no doubt, the immense energy was felt seconds prior to the kickoff of the first track. As the show was launched with the first track, Dive In, the crowds pushed to the front as cell phones and cameras were ready to captivate the presence of the band. Lots of energy from both the band and fans especially, a minute later, lots of red confetti rained from the skies of the House of Blues, making the opening set an even more livelier atmosphere, something that rarely any artists does nowadays. Also something that now many bands do either is play an album in full, as was the occasion with each track from Misadventures, played. Immediately after, the group played the singles off the album, Texas Is Forever and The Divine Zero. Later on lead man, Vic Fuentes, thanked the fans for coming out and supporting them so much. Of course the fans went wild as well as the merch lines being extremely long at the end of the show.

While the album was played in full, one of the tracks known as Today I Saw the Whole World, was played acoustically and made the night a little more intimate. It wasn’t long before then that the album and performance came to a close, at least that’s what everyone thought. The band came out for an encore performance with tracks from their prior album, Collide with the Sky. The closing tracks included, Bulls in the Bronx and King for a Day. Still lots of energy throughout the encore, the fans that night certainly proved that the scene still garners mass support as well as nostalgia playing a big name in the game. Nonetheless Chicago will be eager to receive the misadventures that Pierce The Veil created that night once more.

For more info on Pierce The Veil, click here