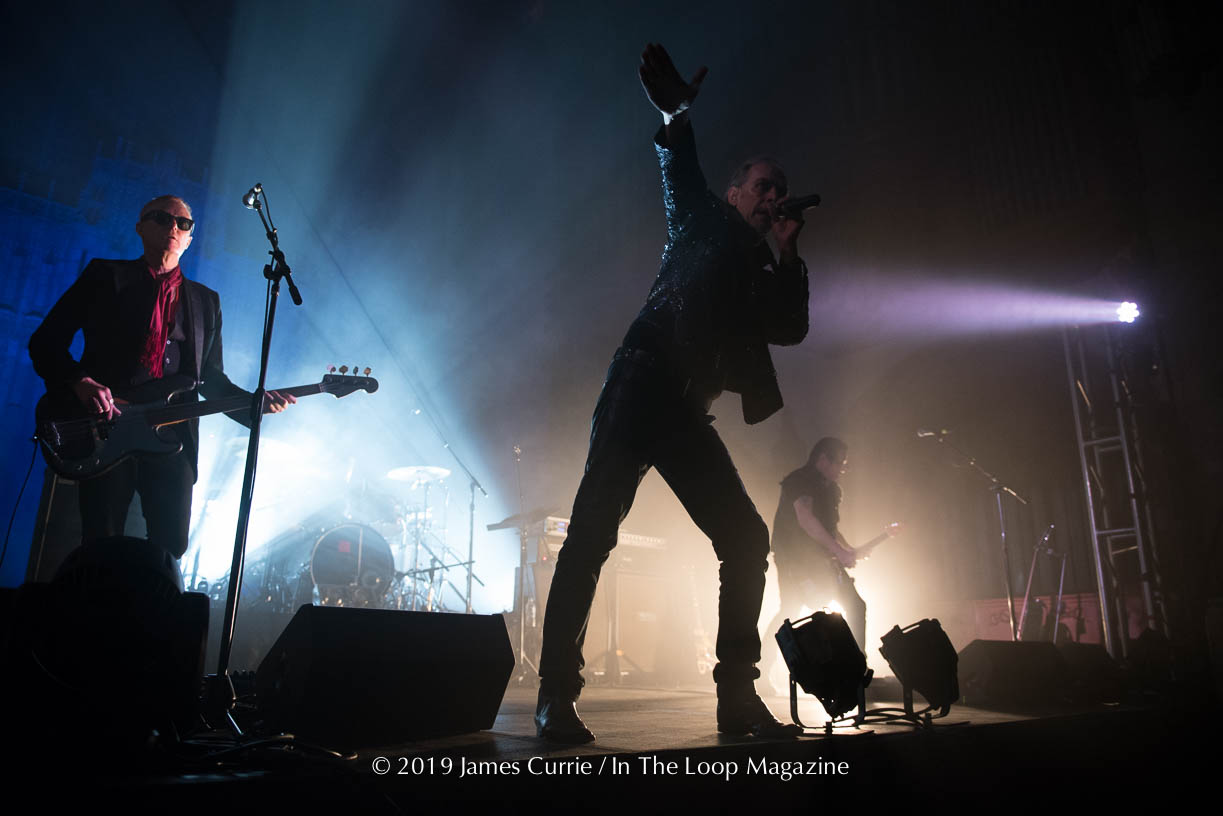 My alarm went off at five yesterday morning. As I tried to turn it off on my phone while wrestling away my sleep, my eyes opened wide when I saw an e-mail notification appear onscreen and the words, “Bauhaus”, “show”, and “tonight” flash across the subject line. I shot out of bed, washed my face, and read the notification again, believing that my eyes played a trick on me. Sure enough, what I saw amid my sleepiness was not the remnants of a dream I awoke from but rather a sign of a dream about to reach its conclusion.

In fact, it was a dream that began two years ago, when I first started writing for this magazine and got my first taste of the iconic post-punk band Bauhaus, by way of the band Poptone. Poptone includes two original Bauhaus members, the drummer Kevin Haskins and the guitarist Daniel Ash. Having had the chance to interview and see them play a few Bauhaus songs at the Metro, we had a shared desire to see these artists hopefully reunite with the other two to play songs from the band that started it all. Luckily after two years, for me at least, that desire was nearly fulfilled last night at the Rockefeller Memorial Chapel when Peter Murphy featuring David J did a Bauhaus anniversary set. Together, they came together to celebrate the fortieth anniversary (dubbed Ruby Celebration) of their debut album, In the Flat Field.

Standing in a line that stretched across the block on a cold wintry night, everybody around me was dressed fittingly in black while I sported my (black) Daniel Ash t-shirt. I was ready, and even more so when the cavernous wooden doors opened and everybody filled the pews of the massive old church. As people filed in, many were struck by the size of the chapel and how minuscule the stage appeared within its colossal space. In fact, the stage was situated in the middle of the chapel with a large area behind it, giving it a bit of a rough appearance while also proving to be a bit of a challenge to see the action.

After seeing a few friends and trying to find a good view around the sound guy, a drag queen appeared in the center aisle between the pews. Dressed in a striking red dress and exaggerated drag queen makeup, she strode down the aisle ringing a bell telling everyone (in a sultry voice) to be seated and then strode onstage. She seated herself at the lone piano and introduced herself as Vinsantos, a drag queen and chanteuse from New Orleans who, as it soon turned out, was the first act of the show. She cracked jokes and threw some light verbal jabs at the mundanity of our lives and her own while also giving a warm welcome to everyone that showed up to the show before she began her set.

When she began to sing, I was struck by the vast emotion in her raspy voice accompanied by her lush piano. In fact, her songs stood in stark contrast to her jocularity and garish look with their tales of bitter defeat and heartbreaking loss. For example, she dedicated one song to everyone in the audience who lost a family member or loved one. Once the song was over, many tears were shed and soon after, her set was largely over to everyone’s dismay. But before she left, she asked the audience to pretend as if she was going to have an encore at which point she walked offstage and then returned to a thunder of applause and cheers to finish off her set.

Soon after she left, the second band, a trio, Desert Mountain Tribe, silently entered the stage, took their positions, and began to play. Their sound exploded across the chapel and after several songs with their soaring vocals and driving psych-rock fury, they finally introduced themselves and let us know they were from the UK. After the brief aside, they immediately returned to the music. But as their set continued, I noticed that the massive echo happening inside the chapel seemed to mess with the band’s sound with both reverberations at times clashing in a confusing mess. Furthermore, the band’s melodies seemed a bit derivative of other post-punk and psych-rock tunes.

Listening to their first songs, they sounded like a cross between the marching rhythms of Dead Skeletons and the soaring vocals of Editors. Also, the lead guitarist, while having a tremendously powerful voice, looked like he had a tough time playing his solo on one of the songs. He plucked a few notes here and there while moving and shaking to get the song moving, while the drummer guided the pace, his driving beat and relentless sound kept the momentum of the set going and prevented it from dissipating into noise. Despite the issues I noticed, Desert Mountain Tribe turned in a powerful performance, appealed to everyone, and generated enough energy among the crowd to get them ready for a “Bauhaus” set.

After the Desert Mountain Tribe left the stage the lights went out and the strobe lights began to flash. As the lights blinked, David J and Peter Murphy emerged onstage while the guitarist and drummer launched into “Double Dare”. The first to appear was David J with his bass, sunglasses, and emotionless face, dressed in a stark black suit. As his bass rumbled with the melody of the “Double Dare”, Peter Murphy appeared wearing a blue sequin jacket with a sharply trimmed goatee that made him look like Mephistopheles from Faust, ready to bargain with our souls in exchange for some post-punk ecstasy.

While the band played, Murphy moved across the stage, contorting his body in sync with the music, and surveying the audience with his cold gaze. As the music went on, Murphy grasped, stretched, and flourished his sequin jacket as he delivered the piercing and legendary “Iyeeee! Iyeee!” that after forty years still retained its strength and insanity.

After “Dare”, they launched into “In the Flat Field” where again Murphy commanded the stage while his voice resonated throughout the chapel with “I do get bored. I get boooored!”. As Murphy roared across the stage, David J held the insanity together with his pulsing fretless bass. The guitarist and drummer (Murphy’s normal solo touring bandmates) kept up with David J’s and Murphy’s energy, acting as phenomenal stand-ins for Ash and Haskins.

But as the set continued, it seemed as if Murphy was wearing himself out. At one point during the show even saying, “Sorry, for the break, but we’re getting tired”. The songs, for some reason, seemed shorter and as such lacked the visceral punch of the versions on their album. “St. Vitus’ Dance” my favorite Bauhaus song, sounded as if it was rushed a bit while another one, “Nerves” which is known for its frantic crescendo at the end, seemed to finish as soon as it started. Moreover, Murphy’s voice sounded raspier and more exhausted with each song. In his brief asides to the audience in which he praised Chicago, his voice was reduced to a croak but still sang “Silent Hedges” with all his might and made the song an electrifying experience. Eventually, though it was not enough since the band hung onto their first of two encores where they played “Three Shadows” and “Severance”.

When they walked off, I was hoping for them to return to the stage for a second encore to hear their version of David Bowie’s “Ziggy Stardust”, but when I saw one of the stage hands making a “cut-off” motion with his hands to the audio engineer, I knew the show was over. The background walk in music began playing, the lights turned on, everyone cheered and quietly got up and left. I hung around trying to grapple with the abrupt ending and finally decided to leave with everyone else.

Despite the lackluster finish to their show, Peter Murphy, David J, and the rest of the band played a phenomenal set. Murphy still possessed the original post-punk fury that launched an entire genre while David J carried the frantic melodies and breakneck pacing with his confident bass. Furthermore, the two supporting acts, Vinsantos DeFonte and Desert Mountain Tribe provided a stellar foundation on which the show largely triumphed. The emotional and wry performance of DeFonte and the epic, driving sound of Desert Mountain Tribe meshed well with Bauhaus’ classic post-punk sound. In addition, seeing Peter Murphy and David J was a great conclusion to a two-year wait after seeing their counterparts Kevin Haskins and Daniel Ash perform at the Metro. But while having seen this Peter Murphy rebranded Bauhaus, albeit in a piecemeal fashion, the real wish hope is to see the original four reunite which is another dream that will hopefully materialize soon. Might I suggest a Riot Fest 2019 reunion?

For photos of the show at Rockefeller Chapel, click here