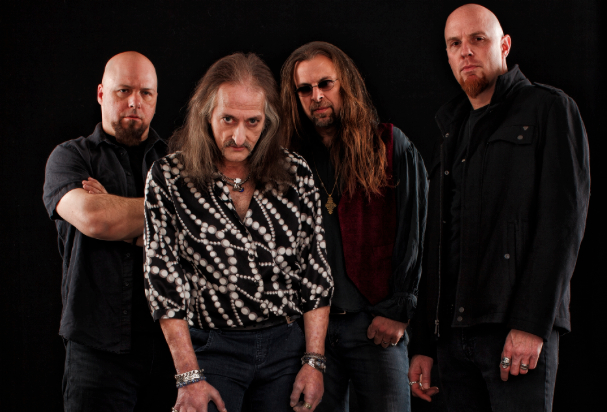 Friday night at The Abbey was a diabolical one indeed, with a solid lineup of occult-drenched rock and metal, capped off by the one and only Pentagram.

Local doomsters Mexican Werewolf kicked things off with a slightly heavier set than the bands that followed, and second on the bill was a turn from Cincinnati’s Electric Citizen, who set the bar high for theatricality as vocalist Laura Dolan hypnotically writhed about the stage.   Citizen’s new album Sateen is a blast of excellent Sabbath-style riffs, while Dolan’s voice, calling to mind Ann Wilson in her heyday, rides high over the tight crunch of Citizen’s rhythm section, and their live show is every bit as engaging as the record. (Indeed, there were fans from Ohio who had traveled to Chicago just to see Citizen open for Pentagram, so keep your eyes on them.)

Satan’s Satyrs took things to a more frenetic level, with heavy-rock tunes leaning more toward punk at times than metal, and the band’s loose, intense sound was almost too much for The Abbey to accommodate as vocalist/bassist Clayton Burgess stalked the stage, surely one of the coolest looking dudes out there, sporting a black body suit right out of the wardrobe closet for the original Alice Cooper group.

But of course, the capacity crowd was there to see the one and only Bobby Leibling lead Pentagram through a career-spanning setlist, and Liebling and Co. did not disappoint. Opening with “Starlady” from First Daze Here, Leibling cavorted and twisted his way around the stage like a psychotic wizard, clad in blood-red satin, his shock-white hair giving him an almost supernatural look as he and guitarist Victor Griffin led the band through classics like “The Ghoul,” “Forever My Queen,” and “Sign of the Wolf.” Pentagram’s new album, Curious Volume, was also well represented, and the new material fit seamlessly alongside old classics, validating the ‘if it ain’t broke’ school of heavy rock championed by the likes of Motorhead and AC/DC. More than once, Liebling appeared genuinely humbled, offering multiple thanks and shy smiles to the adoring crowd, who were as rabid as any I’ve seen lately. With a set that was frontloaded with classics, a mid-point focused on the new record, and a final act that saw the place come unhinged for the crunching power chords of “Relentless” and “20 Buck Spin,” the balance of material was excellent, the performances tight and pummeling. Liebling has had his share of well-documented problems over the years, but if Friday night was any indication, Pentagram shouldn’t look to close the casket on their touring career anytime soon.

When the Screams Come