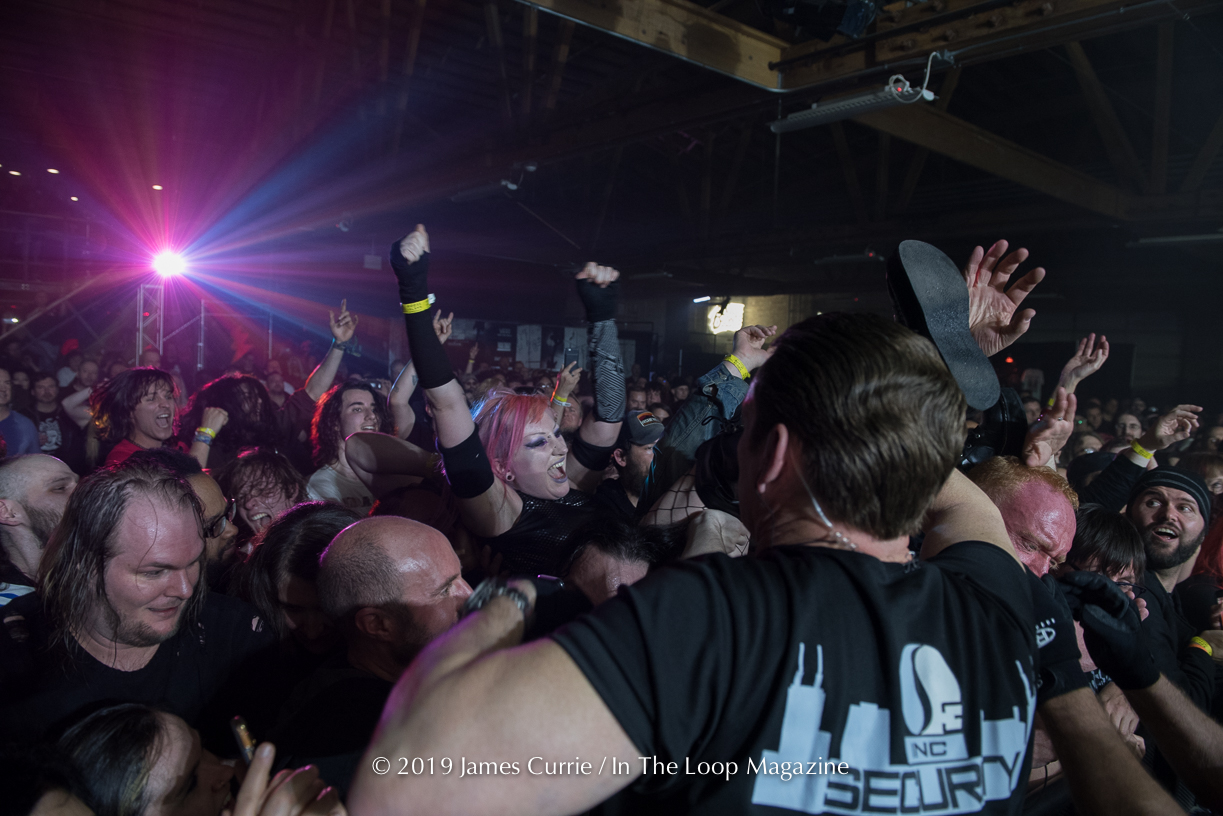 Could you get in? How do you get in? Will you get in? All of these questions have been swirling around Chicago for the past month after this very special night of Wax Trax! fun was unveiled by Ms. Julia Nash in conjunction with House of Vans and the annual day of vinyl celebration ‘Record Store Day’.

Well it was found that if you bought the soundtrack to the film ‘Industrial Accident’, a beautiful love story documentary that Ms. Nash tells about her father, Jim Nash, and his longtime partner Dannie Flesher, that you did get in with a VIP pass, all others could then register for a general admission pass and wait in line for hours with the hope of getting in.

Good news it appeared everyone got in that tried. And kudos to House of Vans for running an unbelievably welcoming, professional, and fantastic facility. The indoor skate park/concert venue is a hidden gem in Chicago’s near west side.

Ok let’s get to the show – Cold Cave kicked it off with a set of songs that could have easily been found on commercial radio in the mid eighties or on the Cleopatra label in the mid nineties. Groundbreaking? no, but a solid mix of new wave synths, gothy melodies and pop song structure.

On to the main event. A Wax Trax! ‘era’ set? What will we hear? The crowd rumbled with guesses from ‘Revenge’ to all of the side projects Al has been involved in. *Spoiler Alert* the set list is talked about below.

Four songs from TLORAH, three songs from ‘Mind’ and three from ‘Psalm 69’ – OK a good start. Blast us with The Missing/Deity (do they ever not get played together?) into ‘Stigmata’ – we are off to a good start! Now, wait – what’s this? arguably one of Ministry’s biggest ‘hits’ (every kid in college seemed to have this single in 1991/2)’ Jesus Built My Hot Rod’! – this song was pushed off of set lists roughly 20 years ago. Why? it’s a tough song to play guitar and drum wise, perhaps getting it perfect in rehearsals was an issue? who knows, but boy was it great to have it back! tight and heavy uncle Al blasted through nonsensical lyrical literation as Sin hid a wide smile on his face seeing the crowd eat it up. This is why we came. After two more off Psalm 69, set staples ‘Just One Fix’ and ‘NWO’ we got three off of ‘Mind’ which included another one that hasn’t been played in a while ‘Burning Inside’ – Chris Connelly helped out on this one and his triumph of lyrical savagery on ‘So What’ … made for the mosh pit ‘Thieves’ rounded out the set.

For the encores Al dug a little deeper and explored, mostly, those albums that came out on Wax Trax! To start the dreamy RevCo dance floor masher ‘No Devotion’, again with Connelly helping segued into 1000 Homo DJ’s take on the Sabbath classic ‘Supernaut’ – now we’re getting Wax Traxy! It was great to hear these two tracks. A brief break and one more, the title track off of TLORAH, for this I was standing next to a young idiot that was grabbing his girlfriend saying they had to go because this was a ‘Nazi song’ – oh my how irony is lost on some. Exposing, mocking and thumbing your nose at is not celebrating, goofball. Anyway to wrap it up, an acoustic version of the breakthrough Wax Trax! classic ‘Every Day is Halloween’ – this song is timeless in any form, a beautiful way to close out magnificent night of honoring a label and its mark on music. Uncle Al and the boys brought the thunder and if the thirst from the fans was an indication – this era set could tour as its own thing and it would make throngs of folks very happy. Kudos to Al for embracing this special time.

Ministry (Wax Trax! Era Set) @ House of Van's Chicago The Scientists Return To Chicago With New Material And Down Under Vigor