Opening Night Gala For PIGFACE25 at 2112 in Chicago 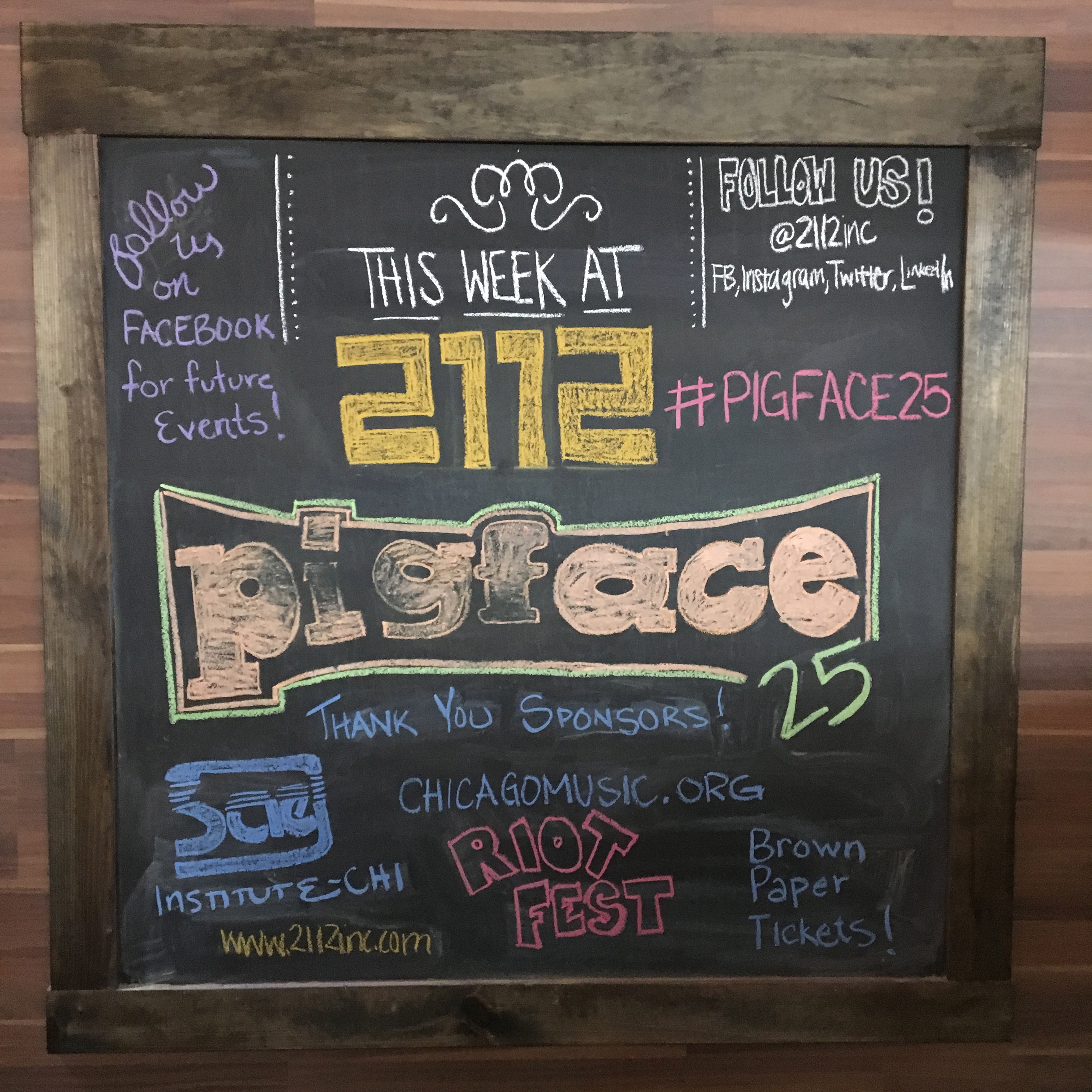 It’s not everyday an artist celebrates their 25th anniversary in the industry. March 31st marked the opening launch of an art exhibit celebrating the life and existence of Pigface, one of the most notable acts in the industrial rock scene. The event showcased everything from artwork, scenery and stunning visuals produced by the band throughout their career to striking sculptured wall-art from artists associated with AMC’s hit cult show, The Walking Dead, art from Newcastle Brown Ale and much more. Also associated with Pigface, art representing Killing Joke and more were seen throughout at the host location over at 2112 Inc. Studios.

The event was put together by the upcoming graduating class at SAE Institute, as part of the Music Business program upon their final weeks before they graduate and depart into the real world. “The opening reception was great. To be able to be part of this celebration of not just 25 years of Pigface but of awesome memorabilia that all had such cool stories behind them. Great vibes and great people came together”, project manager and SAE student Tracy Tiongson mentioned in regards to the kickoff event.

Pigface is an industrial rock supergroup led by Martin Atkins who has previously worked with other talent such as Nine Inch Nails, Ministry, Public Image Ltd., Killing Joke in addition to founding his own record label, Invisible Records. For the release of each album, Atkins would change the lineup of the group in order to resemble the anarchistic views of the punk bands during the punk revolution of the 70’s. Everything from straight-up industrial noise to atmospheric trances and more have been prevalent throughout the musicianship that Pigface has been known and noted for.

Artists associated with the infamous project have worked with, as well as gone on to work for other famous acts such as Nine Inch Nails, KMFDM, Tool, Skinny Puppy, Red Hot Chili Peppers, Sheep on Drugs, Static-X, Marilyn Manson, Dope, Gwar, Zeromancer, Butthole Surfers and many more with recruitment of famous names like Penn Jillette, famously known for hosting shows like Penn & Teller: Bullshit!, Penn & Teller: Fool Us and being one of modern day’s greatest magicians.

The night proved that art and punk are certainly not dead and can come in many forms, shapes, sizes that can attract people from all walks of life. Throughout the venue, a plentiful set of eye-catching pieces such as the Dot Screened Madonnas hung throughout various areas of 2112, the Eye, the EASY Nuns, Welcome To Mexico piece in addition to a curiously interesting dice cross that hung from the ceiling.

Accompanying the multitude of remarkable art and sceneries were famous clothing worn by Atkins himself such as the first punk-suit he ever wore plus the famous flies that make an appearance on his outerwear from time to time.

Overall, the atmosphere for the grand opening night was a successful one with both Atkins and the students of SAE bulldozing through real-life challenges, overcoming obstacles and pulling off a worthwhile memorable event that can stamp a triumph in their soon to be future later next month when they graduate and take on the real world.

For those interested in attending the exhibit such as workshops, tours, presentations, pop-up shops, performances and a full-schedule of events, visit 2112inc.com for more information.