One Of Only Five Shows, Rosanne Cash Reunites With Ry Cooder For A Trek Down Her Fathers Memory Lane 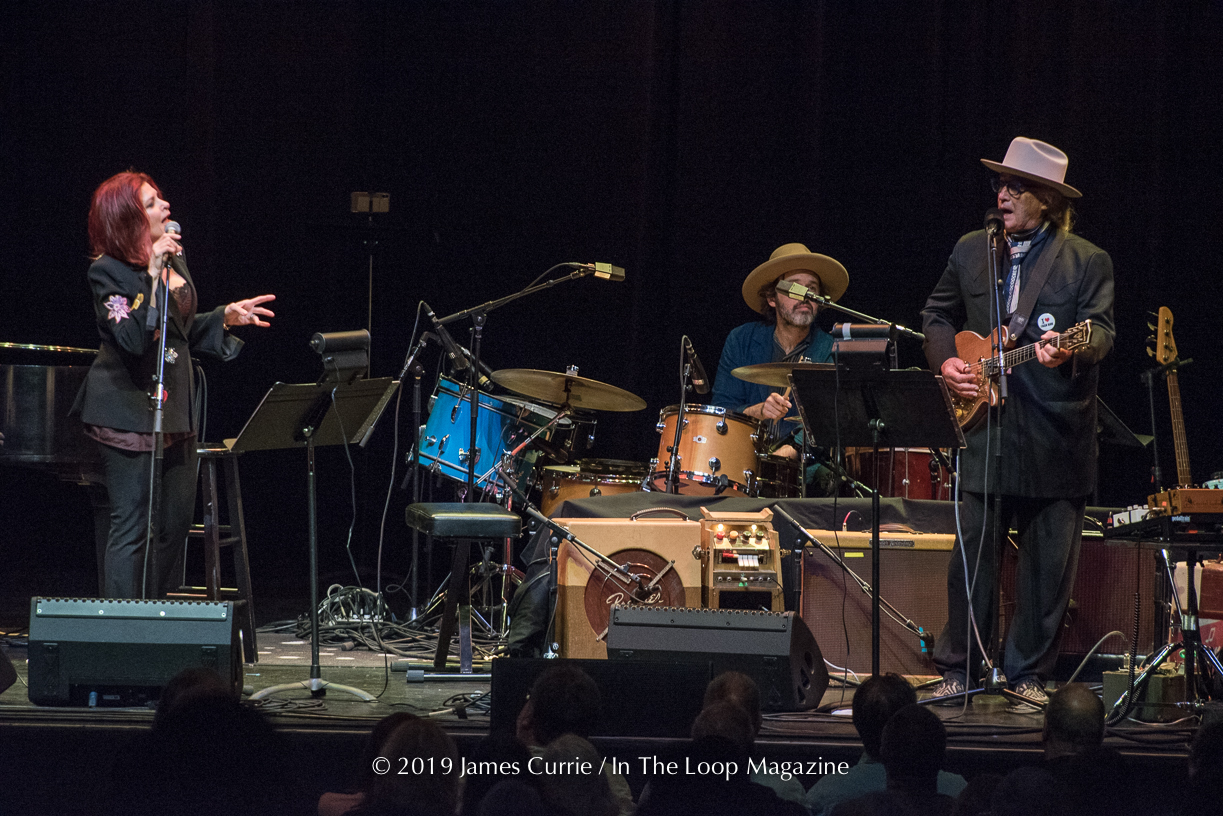 The limited run show dubbed, Cash and Cooder on Cash: The Music of Johnny Cash, stopped by the Chicago Theatre last night for a trip down Johnny Cash’s catalog courtesy of his daughter Rosanne Cash and family friend Ry Cooder. Rosanne Cash said, “He (Cooder) was the only person I would do a show of these songs with.” And these fans were very grateful it happened as Rosanne has been known to shy away from playing her fathers famous songs in lieu of her own solo career. This all stemmed from a residency she did last year in San Francisco with Cooder.

From those shows, comes this micro tour. Cash and Cooder are only playing a handful of dates. Of the five cities picked, Chicago gets a lucky spot hosted at the historic Chicago Theatre. The only other cities are Nashville, Boston, New York and Philly. And these dates are not even in a row. Chicago is the second stop before a break to resume in late the fall making this tour date even more rare.

Fans lined up out side the Chicago Theatre early in the night. I drove by around 5Pm and saw folks milling about already. When I returned at 7PM it was madness. The famous theatre’s marquee lights where on illuminating State Street like the Vegas Strip. Cash and Cooder fans steadily streamed into the vintage hall right up until the shows start.

The stage was set very minimal. A few streaking lights along the back wall with an array of instruments and gear taking center stage. At 8 o’clock, the band started filing out, taking their positions. Drummer Joachim Cooder sits behind the skins and tins. Behind the keys sits Glenn Patscha and Mark Fain fills in on bass. Rosanne and Ry came up the middle and greeted the audience before taking their respectful places.

Rosanne addressed the crowd talking about how this came to be. She talked about how Cooder convinced her to perform the songs she literally grew up with but never wanted to perform herself. She said, “Here I am performing these songs I’ve been trying to avoid for 40 years.” Cooder took over and expressed his love of her father and his music saying, “I explained to her (Rosanne) these could be done in a way that’s not a cover but a loving tribute.” They then jumped right in to it but not before Cooder makes light of things by saying, “Hello, I’m Johnny Cash.” Jokingly of course as that was Johnny’s catch phrase.

They played a couple tracks and then Cooder picked up a yellow and white Fender Telecaster. He told a story about the B-Side of one of Johnny Cash’s hits, “Get Rhythm” where the guitar sound became his trademark “boom-chicka, boom chicka”, “Hey Porter” and how that song was recorded with that very guitar he was holding. The audience moaned and gave praise. He went on to say, “This guitar was a base model. It didn’t even have a second pick up but that didn’t matter. The song had this train rolling riff that moved the track along. It (the guitar) was perfect for doing just that. The show proved sort of traveling museum with not only the songs, but Rosanne and Ry’s stories and various instruments that made the track famous. They then jumped right into playing that infamous B-Side.

Cash and Cooder are on their own, well established and seasoned musicians. They are Grammy award winners, producers and world class instrumentalists. Cash is also a feature writer for several publications like Rolling Stone and The New York Times. Cooder has scored films and a master guitarist. They don’t need to do this for any reason other than the love and respect of The Man in Black and his songs that changed the world.

This concert proved to be heartfelt and personal as most songs were explained and stories given as to why these meant something to them. Yes, they are classics in every sense of the word, but they are also deeply meaningful to them for a variety of reasons, again proving this indeed was the right time and place to make this happen. Cash and Cooder are doing these songs justice in not only making old fans happy, but keeping them alive for a new generation take in and enjoy.