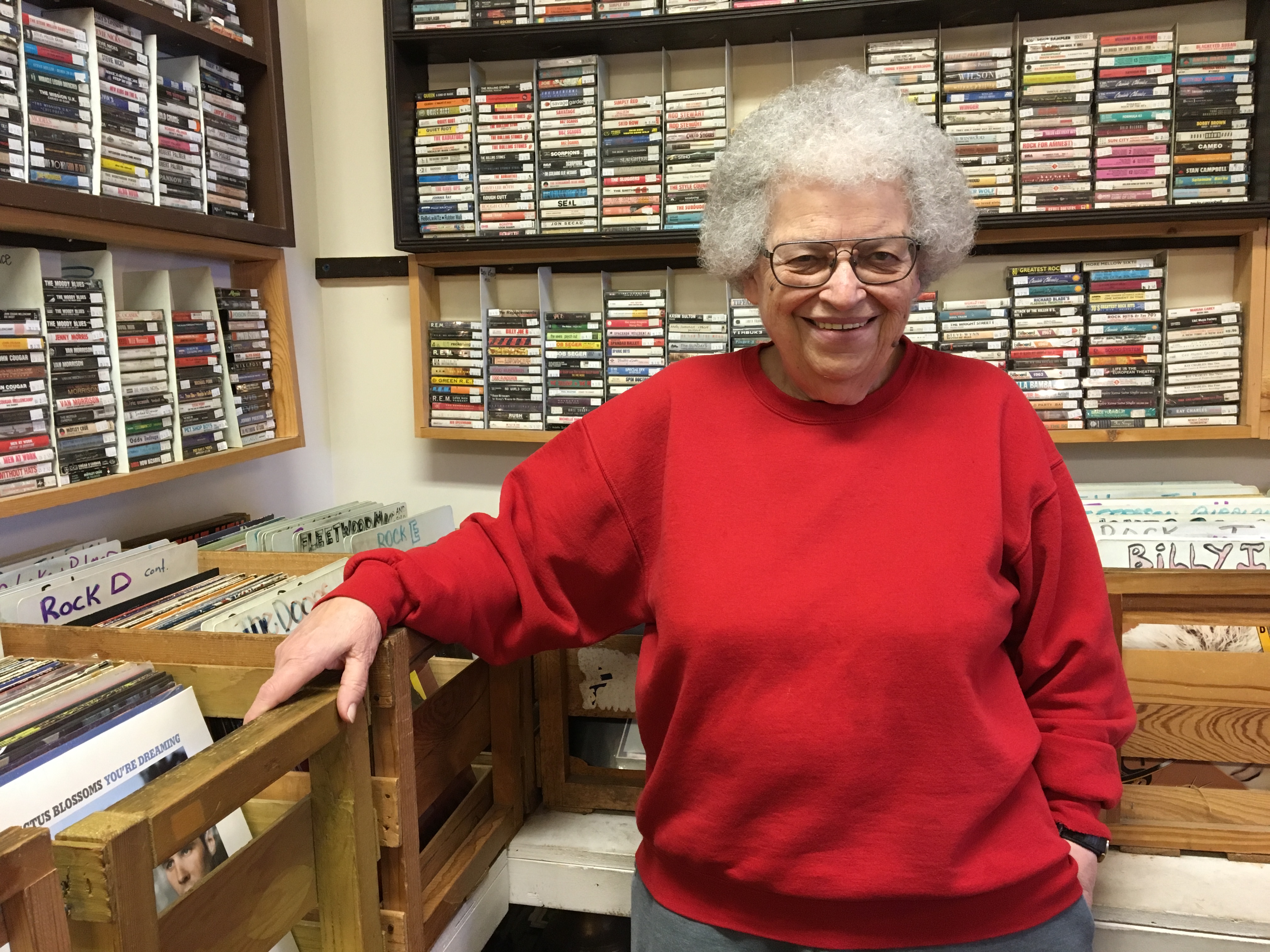 Val Camilletti of Val’s Halla Records in Oak Park, Il, has been running her record store for over 40 years and still loves music just as much today as ever. 2016 marks the 44th year of selling records, tapes, cd’s and all other formats that have come and gone in that time. Her store is more than just a place to buy music, it’s a place of history, a place to catch live concerts & special events at Club Val, it’s socializing with other human beings also interested in music and of course, conversing with a living encyclopedia of musical knowledge that is, Val Halla. She even has the famous, “Elvis shrine” in the back.  If you want to find out about a new up and coming artist, but can’t remember their name, or just want find new music that is similar to someone you already adore, you go in and talk to Val.

Today I talked to Val about the music industry she’s lovingly supported for almost as long as Rock n Roll has been around. I’m not going to go into her background too much.  That’s been covered everywhere else for years, but one note to point out is, she had a very special tie with some very special musicians. We’re talking fab four friends.  She started her music career out working for Capital Records distributing new music the Chicagoland area. One of her first “new bands” she helped promote went on to become the world’s most iconic rock n roll bands of all time, yes I’m talking about, The Beatles, but the connections don’t stop there. She’s worked with just about everybody who was anybody from the 1960’s to present and yes, she is still very active and knowledgable in the music scene.  A record store owner is not just a job to her, it’s her life. A passion that you can see, hear and feel, every time you talk to her about it. Weather it’s discussing the latest Paul McCartney album, or the newest guys on the block in town. Her eye’s light up and she becomes animated character everyone grown to love and respect.

I myself have been shopping at Val’s since I moved to Chicago 18 years ago. Her original place over on South Boulavard was a landmark and should have been made one with her name on it.  That area became part of urban renewal so she packed up her 33 1/3’s & 45’s and moved about 20 blocks south to her new home on Harrison. She’s now in the Arts District of Oak Park. It’s actually a quite fitting place for her four decades of audio history to end up. She’s an artist in her own right and of course the ones she represents fit right it.

After all these year, I wanted to know what keeps her interests going, how she keeps up on new music and what she thinks of today’s industry. We chat at her desk with Lou Reed playing in the background.

James: Soooo Val, how DO YOU keep up with new music? Where do you get your sources and knowledge from? What perks your interest?

Val: I guess it’s several places really. I mean, I’m on the internet all day long here at the store. I get email blasts from things I subscribe to. I read reviews on what’s going on in the industry. I get music in every day here at the store and many times it’s promotional material.

James: So who are some of the new artists you discovered recently?

Val: Right now one Flat Five… which is probably my favorite bands right now in this part of the world, are really good. Their an ensemble of people who are already a part of something else all over the place like NRBQ and such.  I think that Scott Ligon might be the single most talented musician around today.

Val: Well, it’s just kinda true. I mean, hold on, let me do this for you. I do this all the time with customers.

(Val, sitting at her computer, calls up YouTube and starts to search.)

Val: So, one day, Casey and Scott (of Flat Five) were playing of all places, Goldy’s (Goldyburgers), you know the burger joint over here in Forest Park? And I told my friend Tom, on Friday night, you have to go over to Goldies. He said, Oh yeah why Val? I said, just come here, listen… and so I start playing him a clip.  It was of Casey and Scott sitting on a couch doing “Souther Moon”. And he said, oh yeah Val that nice.  Those are great harmonies. And I said, no wait. Hold on… And I pull up the next clip and its Scott playing another song from another band and he said, that’s great too, but wait, that’s the same voices as the first one you played. (holds up her finger motioning to wait a minute) and pulls up another clip this time of The Letter 3 and plays it. This time it’s Scott with others doing a Sly and the Family Stone song. My friend says, now Val, that’s the same voice and harmonizing vocals, is it all from the same guy? So I say again, no wait, then I pull up another track, from another band and play it. And again the friends say’s ok, ok, I get it. At this point it’s almost funny. They are great, I’ll go!

James: Do you still get out to shows much?

Val: (leans back and turns to me) Oh yeah! As much as I can anyway. I have a very select few places I like to go. You’ll never get me to Lollapalooza. I’ve never been to Pitchfork. I don’t even like the House of Blues.  My kind of places are Fitzgerald’s and The Hideout. Also, I’m kinda picky and very selective where I spend my time and money. I don’t go out for just anyone or anything.

Now the other night, I was out at Fitz’s (Fitzgerald’s) (she clicks on more keys of the keyboard and brings up a new track of a live band playing on stage) This was Scott (Ligon) with several other musicians. (She lets the music play to tell more of the story, but before it finished, she’s on to the next one.) This one is Flat Five at the Hideout doing an acapella number. That’s Kelly Hogan and Nora O’Connor back there too. She’s Neko Case’s best friend and does a lot of the backing vocals all over the place.

(She then went into even deeper detail about these musicians telling how they were in a different band in Atlanta and how they use to be involved with even more side projects. How they toured all over the world with Mavis Staples and others as back up vocalists.)

James: And Kelly Hogan is someone from Chicago as well?

Val: Oh yeah. She’s probably the best female vocalist around right now too. These guys are just great together.  They’re going to be opening for Mavis (Staples) on Saturday and Sunday this weekend at Thalia Hall.  You can see them for yourself.

James: So what’s the main act that they all kind of stem from or branch out of?

Val: They don’t really because they are all from so many places. When they get together it’s just like friends hanging out making music together. For Casey and Scott, it’s probably NRBQ. ‘Cause when they go out on tour, that’s a commitment. They’ve been together with that for some forty years. Have you ever seen them live? You should. They’ll be at Fitz’s this June I believe. (she then starts to play an NRBQ video)

James: Thanks, it sounds like I really must at this point. That’s some amazing talent going around there and I’m kind of ashamed I haven’t heard of them sooner.  How did you find out about them? Or specifically Scott? That same customer?

Val: No, not Scott. I would just be out at shows and the band I would happen to be seeing that night would say something like, and we want to give special thanks to our guitarist tonight, or keys or whatever the fill in role was, Scott Ligen, for joining us tonight. I would think to myself, who the fuck is this Scott Ligon guy and why is he all over the place?!

(Next Val calls up a video of them playing live on her stage in the record store.)

Val: It’s just unending. I mean, it’s just… it’s just great. (She leans back and takes it all in as if it was talking about an old friend)

James: I guess it’s the same for me (finding out about new music) I live for finding new music weather it’s a new artist all together or a new album from a old favorite.

Val: Yeah, so who do you like right now? I know you came in today looking for that band (School of Seven Bells) which I didn’t know or have, but what else?

James: I don’t know, it seems to change day to day. I come across so much every week. But I guess right now it’s that School of Seven Bells record, new Anthrax, a band called The Shivas out of Portland Oregon and a new project from Al Jourgensen called Surgical Meth Machine. I’ve been digging on that for a while and really looking forward to the publics opinion on it.

Val: Oh yeah yeah, I’ve heard about that one. A former employee use to be a big Wax Trax music fan.  He kept me up on all that. When does it come out again?

James: I think it’s mid April. Not soon enough if you ask me. ha

Val: I saw some things online about that.  Sounds pretty interesting. (looks up order info) Looks like I can get it and it comes out the day before Record Store Day on the 16th.

James: Pretty much anything you see online about it is from us (In The Loop Magazine). We have exclusive with it, so I may be partial to it all. We did some interviews with Al and some videos. All that will be coming out soon as well.

Val: Cool. Yeah that’s what it’s about. Sharing the info. Now, lets walk around a take a look at things.

James: Yes, and no problem, and right back atcha for the news on Scott and all his projects.