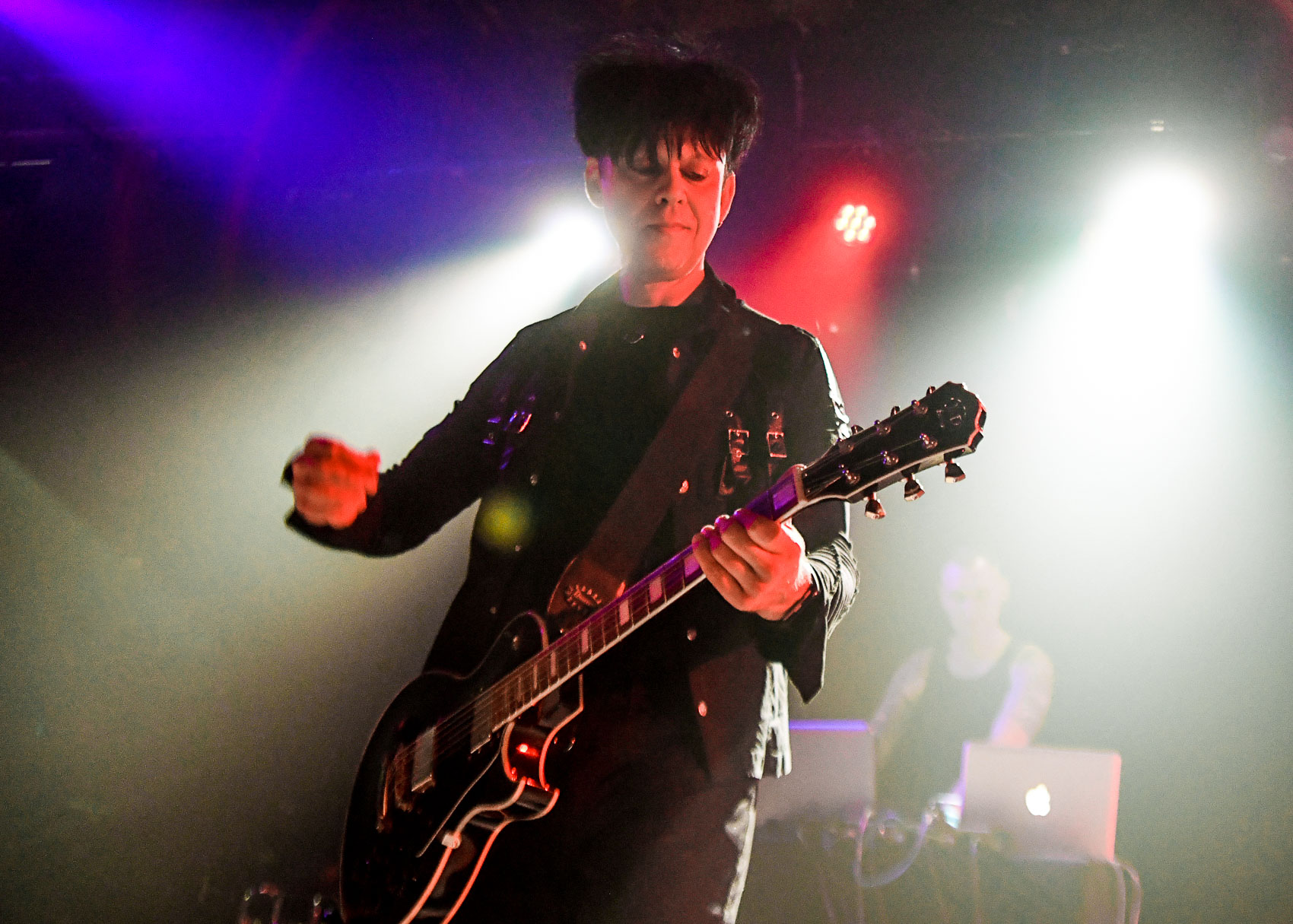 Their music and visual image have remained consistent since Xymox’s early days, and their music still can hold up over the test in time. That’s obviously due to Ronny’s gift for songwriting, and also that he can still provide spritely and chimed guitar fills at a moments notice, and still sing with his upper register intact. That the crowd truly saw this as a celebration helped play the part as well, getting all Gothed up in their nicest clothes and makeup, and singing along to all their favorite songs of yore.

Ronny was in a jovial and lighthearted mood as well, what with the stage banter and occasional ear to ear smile. Yes- the band doesn’t have an over the top stage presence and not much in the way of visual effects, partly due to budget constraints on touring, and also due to the fact that in essence, this a show about the music, and relying on the beauty of that. Very helpful that they brought their own sound technician for this brief tour, to help with the nuances of pulling out the acoustic and slight string electric guitar nuances that are the underpinnings of Ronny’s songwriting.

I for one have to say how captivating this show was, especially for such an intimate venue as the Bottom Lounge. Once again, Ronny Moorings and Clan of Xymox proved they have a special place in the hearts of many- with their iciness and exotic melodies still quite intact.

The opening acts provided their own unique performances as well. Decoded Feedback- the brainchild of Marco Biagiotti and Yone Dudas provided a short but instrumental set that was improvised last minute by Yone, because of medical problems with Marco. Unfortunately Marco couldn’t make it to Chicago’s show, laying in a bed with the flu, provoking Yone to go solo for this performance with an electronic keyboard, and only an electronic keyboard. Have to say Yone pulled it off nicely, what with the heavy beat and sonic washes of the music being front and center.

Decoded Feedback’s music still sounds fresh, even with this performance not having vocal at all. To put it simply- nothing like a dose of cold and icy electronic music with dark melodic undertones to get your blood going.

The openers Autumn, known as Autumn – U.S., a three piece based out of Minneapolis Minnesota, have their own beautiful take on passionate and haunting melodies, partly due to the gifts of Julie Plante, their Lead Vocalist, but also equally due to the majestic guitar playing of Neil McKay and the Bass Playing of Jeff Leyda.

I had a nice conversation with William Faith during Autumn’s soundcheck, and I was telling him how much I liked hearing Neil’s guitar playing and his unique sound. Faith told me he thinks Neil is one of the most gifted guitarists he’s ever heard, and that should say something coming from him- Faith being quite the instrumentalist himself as well. That made me pay close attention to Autumn’s set as well, even though they were the opening act, and only allotted a half hour time slot for this show. No matter. I thought they pulled it off quite well, and their songs have a lushful and haunting quality to them.

Throughout the night, opening the show and between set changes, we had the one and only Pirate Twin DJs, Scary Lady Sarah and William Faith, spinning all things dark and lovely to make the night even more refreshing.

For photos from the sold out show at the Bottom Lounge, click here