Neo, you are the one! After 36 Years, Iconic, Alternative Night Club in Chicago Closes Its Doors 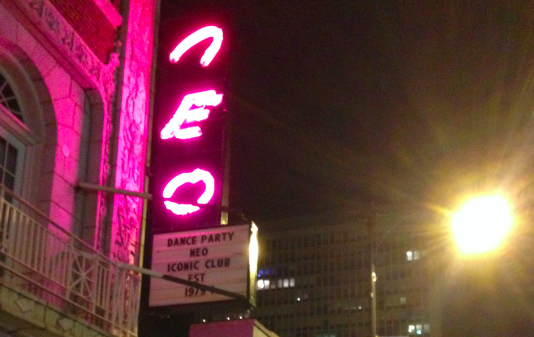 Last Thursday marked the end of an era. The simple 3 letter (neo) pinkish neon sign was lit out front. Hanging of the sidewall entrance to the alley. The last record spun on the turn table, the last boot mashing dance kicked, the last New Wave Thursday at the original nightclub, neo, took place. For ever. Owners closed its doors after 36 years as Chicago’s longest running nightclub.

Formerly located in the back alley of 2350 N. Clark St, neo’s time has run out. According to co-owner, Ken Smith and bar manager Dann Szymczak, they lost their lease. But that’s not the end of the story. Currently, they have plans to move to a new location AND they are keeping things a live, albeit at another location, with New Wave Thursdays now at Debonair. It’s a temporary fix until they get a new location finalized.

During the last days of neo as we know and love it, owners organized a 36 Year Reunion party. It lasted 3 days in late July, each day representing a decade of the Lincoln Park neighborhood club. Word got our fast and club goers from all decades came out to show support and relive the memories one last time. So much so, that they had a line down the block and around the corner every night. Normally this would not be the case, but no one in line seemed to care. It was a last hurrah!

On the night I visited, I spoke with people in line from all around. Some as far as California who made the trip back just to dance on that iconic floor one more time. Jennifer Maltin, 48, was a regular back in the late 80’s and early 90’s. She said going there at least once a month was just expected with the group she was hanging out with. “We just loved to dance, but not just any dance. We weren’t into the club scene that was happening at most dance halls. We were different. We looked different. We liked different music. Neo fit what we were looking for. We made lots a friends with staff and other clubgoers in the years we went.” She went on to say that it’s still a rarity to find a club like this. Even in California where she’s been for the better part of the last decade. She continued, “I mean, it’s not like I still go out all the time to dance, but when I do, I want something like Neo, but that’s not around where I am and now it won’t be here anymore either. It makes me sad. Even if I don’t hang out here like I use to.”

Other people I met were just as diverse as the club itself. We had Dr’s, teachers and even a used car dealer waiting in line like everyone else to get one last mix in. Sure, neo is known for it’s “alternative” crowds. I’m a metalhead, alternative punker myself, but I don’t look it. Maybe back in the day, but hey, I still have my roots no matter what I wear now. Back then, we got on our black leather pants, favorite sleeveless industrial metal band shirt, accessories to all ends and laced up our monster mashers to hit the floor to groove to Rob Zombie’s “Dragula”, Depeche Mode’s “Enjoy the Silence” or Nitzer Ebb’s, “Control, I’m Here”.

The alley was graffitied up nicely with artwork, thank you’s, fuck you’s and RIP’s – 1979-2015. Motorcycles line one side of the wall. Many came dressed to impress. Decked out in their best goth/punk/biker/circus rags.

The staff was absolutely fantastic. The door greeters all smiles and thanking everyone for their patience waiting in line and coming out to show support. Even Ken Smith with their to say hi, take people around and mix and mingle with the folks who called this place home for so many years.

The inside was still neo. Dark, dank and music cranked. Graffiti art continued throughout the walls including black light sketches in the bathroom hall and toilets. People were drinking PBR at the cash only bar and dancing as if nothing else in the world mattered. The single Disco Ball hung from the center of the dance floor reflecting random lasers and lights that hit it. There was a screen hung on the far end of the dance floor projecting images from years past and more. People stood on the random shapes that make up the ends of the clubs seating area.

In the small, cramped, glass block cave of a DJ booth in the corner was Suzanne Shelton. She was the clubs first DJ when they first opened. She was responsible for forming the way the club would be. It was her idea to make a dance club that wasn’t Disco, but something different. Something for others like here that wanted to hear underground music and get a groove on. New wave, punk, industrial and electronic was the target and boy was it ever. Within weeks, she brought in those others looking for a unique club to call home. Tonight was a little different than when she originally spun, as an iPad substituted as turntables. Later she played another night with vinyl as ol’ skool as you could get.

Throughout the years, many people have visited including the famous. Trent Reznor of Nine Inch Nails, Al Jourgensen from Ministry, Simon LeBon from Duran Duran and even David Bowie to name a few. Neo was Chicago’s version of CBGB’s and Studio 54 without the bad Disco and the bullshit.

Even though the doors are officially closed now at the Clark St. Lincoln Park location, you can still live your neo-nights out through the surrogate Debonair Social Club in Wicker Park. Located at 1575N. Milwaukee Ave. DJ Jeff Moyer and Kamar will be spinning as well as staff from neo will be working the bar and doors. For now, we’ll take what we can get. Here’s to hoping the owners can find a new home as unique and cool as the old place and make it something neo for another 36 years. It has to happen because as the great Morpheus once said, Neo, you are the one. As we know, the one that brought all us unique kids together for one common bond.