Ministry Release Advance Single, Announce New Album and US Tour For 2018 With Stops In Chicago 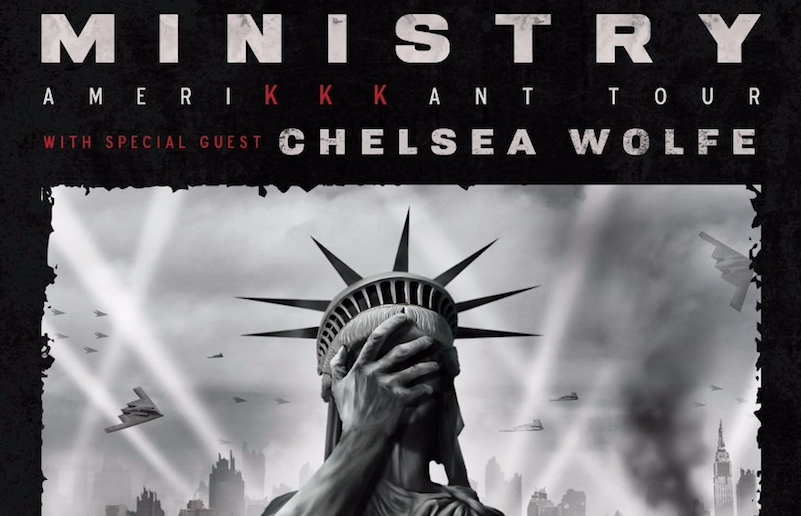 American industrial juggernaut MINISTRY, announces its new album AmeriKKKant, the band’s first release for Nuclear Blast Records (worldwide), due out March 9, 2018.  In addition, the band’s Al Jourgensen is proud to release the album’s first single/ official music video, “Antifa,” that stands up to the political chaos that is currently going on in America and can be checked out here.

“This album, AmeriKKKant,” previously stated mastermind Al Jourgensen. “Will provide FEMA type relief for the devastation ‘Hurricane Cheeto’ has brought upon us.”

Produced by Al Jourgensen, recorded at Caribou Studios in Burbank, CA between January and May this year, and with striking artwork created by Mister Sam Shearon, the psychedelic, politically influenced and very much in-your-face AmeriKKKant’s nine tracks are rooted in Jourgensen’s unadulterated anger for what’s happening in America today: the waning respect for the U.S. Constitution, the growing acceptance of one’s opinions replacing facts, the decline of our leaders’ sense of morals, ethics and personal responsibility to the country and to their constituents, and the mad man in the White House. The AmeriKKKant track listing is below; you can pre-order your physical or digital copy today via  Nuclear Blast or Pledgemusic.com.

To support the release of AmeriKKKant, Ministry will headline a five-week North American tour that kicks off March 22 with the enigmatic Chelsea Wolfe supporting.  Tickets go on sale this Friday, December 15 at 10:00AM (local); for all ticket purchasing info, go to www.ministryband.com/shows. Confirmed tour dates are as follows:

For decades, the powerhouse of psychotic sound that is MINISTRY has overcome millions with releases such as Filth Pig, The Mind Is A Terrible Thing To Taste, Psalm 69, From Beer To Eternity, and a flood of others. Since the 80s, founder Al Jourgensen, has been combining elements of synth pop, punk, metal and even dub in a way that is instantly recognizable and has influenced many other bands.

With timeless classics such as “Just One Fix,” “Thieves,” and “Jesus Built My Hotrod,” MINISTRY are one of a kind musical pioneers.

With six Grammy nominations to date, over 3 million records sold, more than 2,000 live performances, and movie soundtrack work on Hurt Locker, Artificial Intelligence, Matrix, Robo Cop and SAW, MINISTRY has been contributing to the music industry for over three decades.