Midnight Oil Reunite For Show At The Vic Theatre, Save Us From Ourselves on The Great Circle Tour 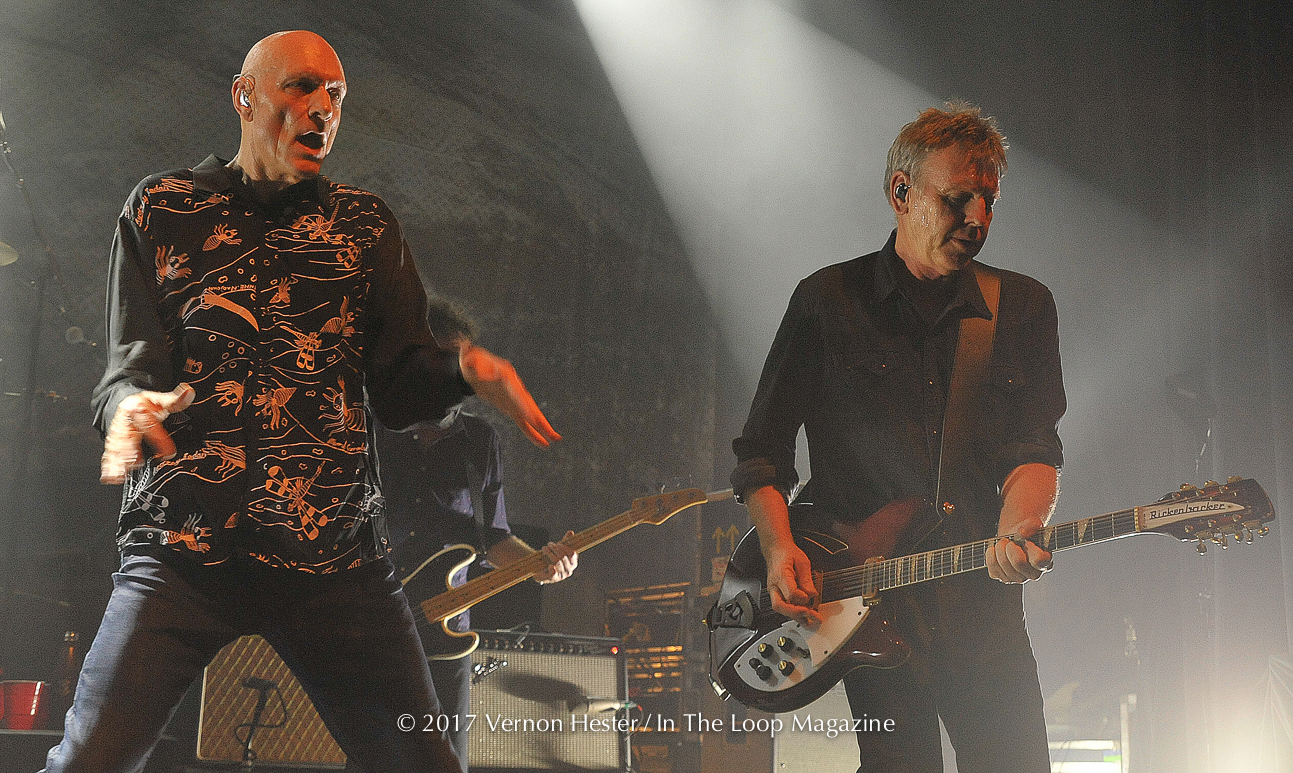 The amusing irony surrounding Australian band Midnight Oil is that they only seem to tour the United States when the country looks headed for the shitter. The last time they came through was in early 2002, a few months after a bunch of nutters had the bright idea to smash airliners into buildings with people on board. Now, just days after the President of the United States had been accused of colluding with an opposing power to rig an already questionable election and laundering dirty money, a reunited Midnight Oil landed at The Vic to save us from ourselves.

Granted with Hall and Oates, Tears for Fears, Jon Bon Jovi, and  (a few months ago) Adam Ant heading up massive tours, one could think that 80s rock is the new “hot” ticket. A friend referred to Midnight Oil as a “one hit wonder” from that era, but the truth is the band has always had a passionate following while the music was a blistering call to action and activism. In short, Midnight Oil was always about something (that activism included playing a surprise lunchtime set in 1990 in front of the New York headquarters for Exxon Oil where they displayed the banner “Midnight Oil makes you dance, Exxon Oil Makes Us Sick.”). But where say Bono preaches from arena stages, Garrett and company have often taken the voice of the oppressed to carry their message. The ‘White Man’s Burden’ was never Midnight Oil’s cup of tea.

“The Great Circle Tour” is really everything that every Midnight Oil fan could ever want and then some. With no new music out, the faithful  will just have to settle for The Vinyl Collection (all of the studio LPs and CDs), The Full Tank (all of the CDs and music videos) and The Overflow (featuring over fourteen hours of rare and previously unreleased material). The tour and the re-mastered re-releases may be the last we’ll ever get from them since vocalist Peter Garrett has made a go of living the political life in Australia, but so far everyone is keeping mum on that.

But enough about all of that, the question is, a good fifteen years after their last shows here, does Midnight Oil still kick butt are they still “about something?”  Sad to say, yes and yes but for different reasons. Though Garrett did not mention the Commander in Chief by name he kicked off the show with a hearty “Hello Obama-Town,” which made it clear where the bands respect was aimed. Early on Garrett made the point that though they have not recorded anything new in that decade and a half he could not hide the fact that the issues that this bluntly political band sang about in the 1980’s and 90’s (environmental issues, consumerism, politics, civil rights, militarism, the threat of nuclear war) are still relevant today. I mean really, after the high profile oil pipeline stand off over American Indian lands earlier this year, the smash “Beds Are Burning” has not exactly lost its bite. Ever the gentleman, Garrett would not stoop to performing in a foreign country while talking smack about the current government. Typically he just let the music do the talking.

Kicking the show off with an otherworldly “The Outside World,” Garrett and company (Rob Hirst on drums, Martin Posey on lead guitar, Bones Hillman on bass, and Jim Moginie on guitar and keyboards) set an alternately haunted and bracing atmosphere which literally drugged the room. Loading the early part of the show with obscure and uncelebrated songs gave the show gravity and grit, paying off in dramatic and refreshing ways. “Read About It,” “Short Memory,” “Scream in Blue,” Tin Legs and Tin Mines,” were just the warm up to what was coming next. “The Power and the Passion,” “Somebody’s Trying to Tell Me Something,” “When the Generals Talk,” “Ships of Freedom,” and “Spirit of the Age” saw the band let loose with unbridled fury, and Hirst, Posey, Hillman, and Moginie have hardly lost their powers as beat bashers or their precision at nuance. Hearing them last Thursday night held a glimmer of sadness because this more mature Midnight Oil is the best version yet and the thought of this being the last of them seems is reason to be melancholic.

Garrett still makes a passionate and arresting front man and it was well worth waiting all that time to see him whip about doing his spastic zombie dance with unchecked energy. Amusingly, with all that punk edge and hard rocking fury, when he spoke to the audience he still had the chatty effusiveness of a Brit debutante after her first biscuit and cup of Earl Grey at tea time.

Then came the pile up of radio hits and a chunk of the bestselling Diesel and Dust (Sprint/Columbia, 1988). “The Dead Heart” felt ghostly and sad but “Beds are Burning” was brutal, unchecked rage delivered with a much younger man’s punch (and yes, its still one of the best rock records to dance to). Unsurprisingly “Blue Sky Mine” soared but “Dreamworld” was the killer. As Garrett snarled “Your Dreamworld is JUST about to end…,” and the band ripped through the song with malice it was undeniable that these guys have yet to forget fighting for their rights. If anything, this version made it clear that Midnight Oil is still pissed big time.

Of course the crowd went nuts and of course they wouldn’t let them leave the stage. The first encore kicked off with a compelling reading of “Put Down that Weapon” and finished with a completely satisfying and apt take on “The Forgotten Years,” but the best was yet to come. The second encore was a heartfelt thunderous rip through “Sometimes,” which after all that rage aimed at corporate America, power brokers, unchecked military regimes, and self serving and shady politicians, was a cheery reminder for us ordinary individuals to stay involved in the “good fight.”

Indeed, Midnight Oil has saved us once again.

For photos from the Midnight Oil show at the Vic, click here

20. Put Down That Weapon