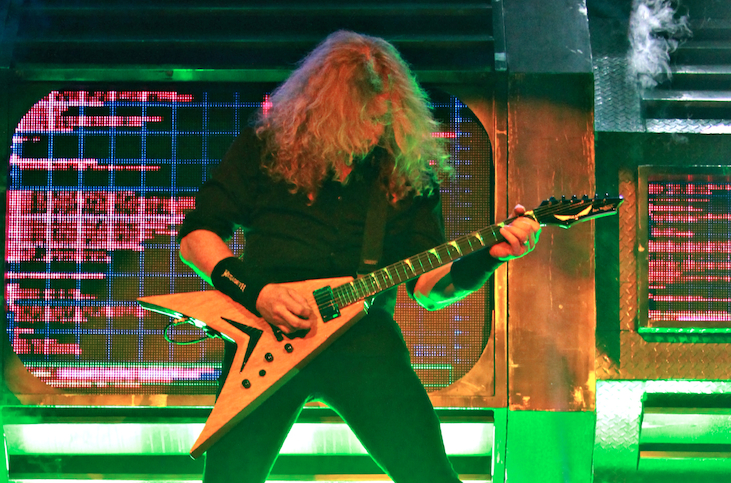 After seven long years, and two Chicago dates in 2016, Megadeth finally made their return to this metal starved fan’s home area of the Quad Cities with the second North American leg of their Dystopia world tour. Along with a strong current lineup; Dave Mustaine (Megadeth founder, lead vocals, guitar), Dave Ellefson (co-founder, bass guitar), Kiko Loureiro (guitar) and most recently added Dirk Verbeuren (drums), a Modern robot version of mascot Vic Rattlehead, and notably top-shelf stage production this round of the Dystopia circuit features a diverse selection of prominent in their own right support bands in Amon Amarth, Suicidal Tendencies, Metal Church, and Butcher Babies. There is something on offer here for metalhead preferences across the board and Dave Mustaine’s choices of accompanying bands succeeds in skillfully drawing a cross population of fans while also serving to expose some to talent they might not have been familiar with previously.

Doors to the iWireless Center, a 12,000 seat multi-purpose venue on the Mississippi riverfront in Moline, IL. were opened at 5pm. The Butcher Babies started off the night with a brief 20 minute set at a bafflingly early, for an indoor Friday night metal concert, 6pm to which I chalked up the seemingly low initial numbers in attendance. Even with a General Admission open floor, a huge push of ridiculously cheap ticket prices the day leading up to the show (seven-friggin’-dollars, folks!), and the entire upper bowl of the arena curtained off this venue was sadly and sparsely populated. The floor was at maybe a third of it’s capacity and people were sporadically sprinkled throughout the lower bowl leaving vast areas of empty seats but, I remained optimistic that fans would continue to arrive as the evening progressed. They did continue to trickle in as the night went on and the floor eventually came closer to filling but it remained a relatively lackluster turn out from our community. There will be no more complaining from me that my favorites no longer stop here as I can know clearly see why they don’t. That having been said the fans that did make it out were enthusiastic, eager for a head banging night ahead, and man, what a friendly lot they were! A great time was had by all and the bands gave everything they had to make sure of that.

American heavy metal band Metal Church was the second band up with a short but strong five song set; Fake Healer, Start the Fire, No Tomorrow, Badlands, and Beyond the Black. Their sound was solid and the audience, an impressive number of which sported Metal Church shirts, were responsive, singing along and chanting “Metal Church” in hopes of an encore at the conclusion of their performance. Fans didn’t get an encore but they did get an opportunity for autographs and photos with the band at the merch booth.

I was so flippin’ stoked to finally see California’s punk/thrash crossover pioneers Suicidal Tendencies that everyone that came into contact with me for days prior had to hear all about my giddiness. My only disappointment was how incredibly fast their eight song set flew by! Tearing straight into it with “You Can’t Bring Me Down!” Suicidal front man and lead vocalist, Mike Muir’s high energy, and always positive “believe in yourself” message, was fully met and matched by fellow band mates Dean Pleasants (lead guitar), Jeff Pogan (rhythm guitar), Ra Diaz (bass guitar), and of course the latest addition to the Suicidal crew, the legendary skin smasher himself, Mr. Dave Lombardo. The speed and intensity continued on with; “Freedumb”, “Trip at the Brain”, “War Inside My Head”, “Subliminal”, “Cyco Vision”, “Living for Life” – the only offering from the recently released “World Gone Mad” album, and finishing too soon with ST! anthem “Pledge Your Allegiance!”. SxTx could’ve played until we all dropped and most of us would’ve collapsed into a happy, contended heap. Though, I am extremely grateful that I didn’t actually keel over as then I would’ve missed out on kissing Lombardo on the cheek at the merch booth photo-op/autograph session the guys gave after their set and, of course, the forthcoming ass kickings from Amon Amarth and Megadeth.

As the lights came up and some raced off to score Suicidal merch, photos and autographs between bands the most serious of Amon Amarth fans in attendance took advantage of the clearing out to secure their coveted positions at the barricade. The stage was set with the fore half of a Viking longship bearing recently announced permanent drummer, Jocke Wallgren’s, drum kit at its rear, a set of steps going up either side, and a smoke spewing dragon’s head as the ship’s bow. The Swedish melodic death metal band’s lead vocalist, Johan Hegg wielded a giant war hammer, as he swung it around and smashed into the stage floor Amon Amarth, also made up of guitarists Olavi Mikkonen and Johan Soderberg, and bass guitarist Ted Lundstrom launched into their assault with “Twilight of the Thunder God”. As the crowd pressed forward, sang along, formed mosh pits and bore witness to an onslaught of Viking mythology and history delivered by one of death metal’s greatest talents on tour today the band slayed on with “The Pursuit of Vikings”, “As Loke Falls”, and “First Kill”. With “On A Sea of Blood”, “Runes to My Memory” and “Deceiver of the Gods” the crowd raged along with the musical frenzy. After a call out to “Raise Your Horns” to which we jubilantly obliged we were brought to Amon Amarth’s finale song “Guardians of Asgaard”. Amon Amarth brought an impressive production and performance that surely satisfied all that were present for it and undoubtedly earned them some new listeners as well.

While standing in line for brews early in the evening two young men in their early 20’s struck up a conversation with me about the night ahead and which band each of us was most looking forward to seeing. During this chat one of the guys exclaimed that he has been a Megadeth fan since he first heard them at 12 years of age. I happily responded that I was also 12 or 13 years old when my love of thrash metal and the music of Megadeth came into my life. Then I was hit with the realization that this meant that I’d first heard Megadeth with the 1986 release of “Peace Sell… but Who’s Buying?” while my new acquaintance came to know them 18 years later with the release of “The System Has Failed” in 2004. Ouch. However, with 33 years of thrashing under their belts, along with 15 studio albums, 6 platinum albums, numerous Grammy nominations, and tens of millions of albums sales worldwide I let myself be comforted with an understanding that the fan base is bound to span an imposingly wide demographic.

Straight out of the gate with their classic and popular track “Hanger 18” Megadeth had us directly off to the races. The crowd responded immediately and the thrashing, head banging, moshing fun of an 18 song performance had just begun. Having worked myself into the front lines of the action and focused solely on the show before me it wasn’t long before I took a body surfer’s boot to the head and I was happy enough for it though reminded to be mindful of all of my surroundings! Making up the rhythm section of Megadeth Ellefson, at home once again, and Verbeuren expertly kept everything in time. After shredding through “The Threat is Real” from the Dystopia album Mustaine took a moment to dedicate the third song up “Tornado of Souls” to the late, and former Megadeth drummer, Nick Menza who died on May 21, 2016 having succumbed to heart failure while performing in Los Angeles with his band OHM.

With a sensational combination of a huge video backdrop, which featured artistic animations and official music videos playing in time throughout the show, stunning fog and light shows, and tight performances from every man on stage Megadeth delivered fully up to and through the finish line. Mustaine’s voice was strong and his range sounded good from end to end. Loureiro didn’t just keep pace with every tune on the itinerary he nailed each of them as if they had always been his own with an intricate style complimentary to Mustaine’s guitar work. Without a lot of talking between songs the guys continued to pummel us with one fan favorite after another including a healthy seven songs offering of the Dystopia album itself. Long awaited by devotees, Vic Rattlehead made his robotic, audience taunting appearance with the show’s equally well received conclusion of “Peace Sells”. I’m sure I wasn’t the only exhausted, parched, sweat soaked attendee by this time but we rallied along with the band for their encore performance of “Holy Wars… The Punishment is Due” and finally wandered off, satiated at the raising of the house lights. Beyond a shadow of a doubt understand that Megadeth is still bringing it and take your ass, and the asses of your speed metal loving friends and family members, to the next venue they’re scheduled to play nearest you. Even if you have to take undertake a bit of traveling to get there as I surely will for my next watch.

For photos from this show at iWireless Center in Moline, Il, click here