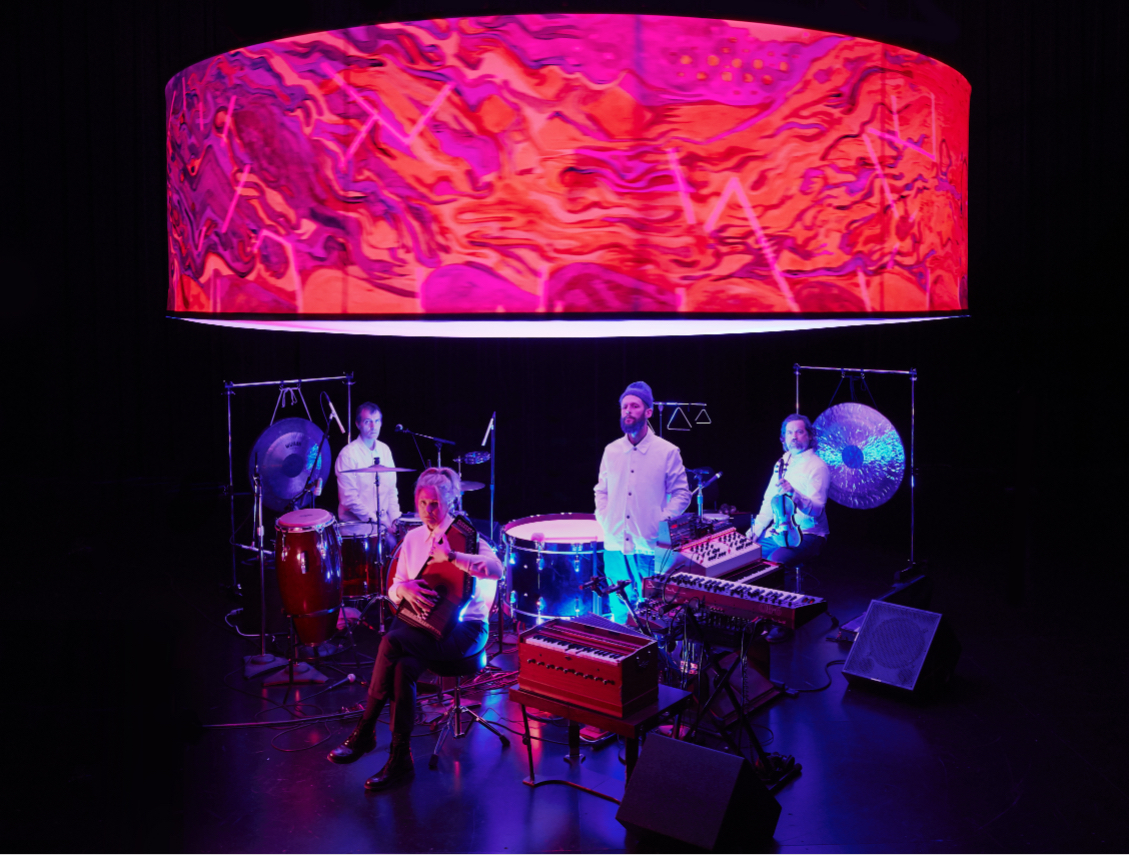 The Museum of Contemporary Art Chicago presents Bellowing Sun, an audio-visual performance by composer Jaime Fennelly as part of his evolving project, Mind Over Mirrors. Divided into twelve passages, Bellowing Sun is an investigation into the celestial cycles of the natural world and a dialogue between acoustic and electronic musical traditions. Commissioned for its Chicago premiere by the MCA, the production features a large, cylindrical light sculpture suspended above the performers with a translucent textile skin. Designed and hand-built in collaboration with artists Timothy Breen, Eliot Irwin, and lighting designer Keith Parham, the visual centerpiece is an internally illuminated zoetrope with patterns and abstract figures. While the quartet performs, encircled by the audience, the light sculpture rotates and reveals a kaleidoscope of organic shapes and color, evoking astronomical objects and microscopic life forms. Bellowing Sun runs for two nights, April 6-7, 2018 at the MCA Stage.

Bellowing Sun features vocalist and percussionist Janet Beveridge Bean, violinist Jim Becker, and percussionist Jon Mueller, along with a harmonium and analog synthesizers in Mind Over Mirror’s first venture as a full ensemble. Paired with the ambient tones of Fennelly’s Indian pedal harmonium, this performance expands Fennelly’s compositional approach of layering acoustic and electronic instruments, which complements the ever-changing colors and animations illuminating the audience. Every vantage point is exposed to a unique pairing of sounds and images as Bellowing Suntransforms the theater into one synthesized and energized body.

Mind Over Mirrors is the ongoing project of Jaime Fennelly, who has been making work under the name since 2010, following a three-year period spent living on a remote island off the coast of Washington state. Now based in Chicago, his recordings have debuted on a number of labels, including Paradise of Bachelors which released Undying Color (2017), and the studio recording of Bellowing Sun (2018). A multidisciplinary artist, Fennelly is known for incorporating his own photography on his album covers and often collaborates with other performers. Most notably, Fennelly has worked closely with choreographer Miguel Gutierrez, and together they produced Sabotage(2001-04), a touring duet of music and dance improvisation, and Storing the Winter (2013). In 2002, he co-founded the musical group Peeesseye in Brooklyn. Fennelly received his MFA from Bard College in 2006, where he studied music and sound with Maryanne Amacher, David Behrman, and Pauline Oliveros, among others.

The Mike And Micky Show: Mike Nesmith And Micky Dolenz Of The Monkees To Tour As A Duo For The First Time Greenhouse Theater Center Seeks Companies and Artists for Co-Productions During 2018-19 Season