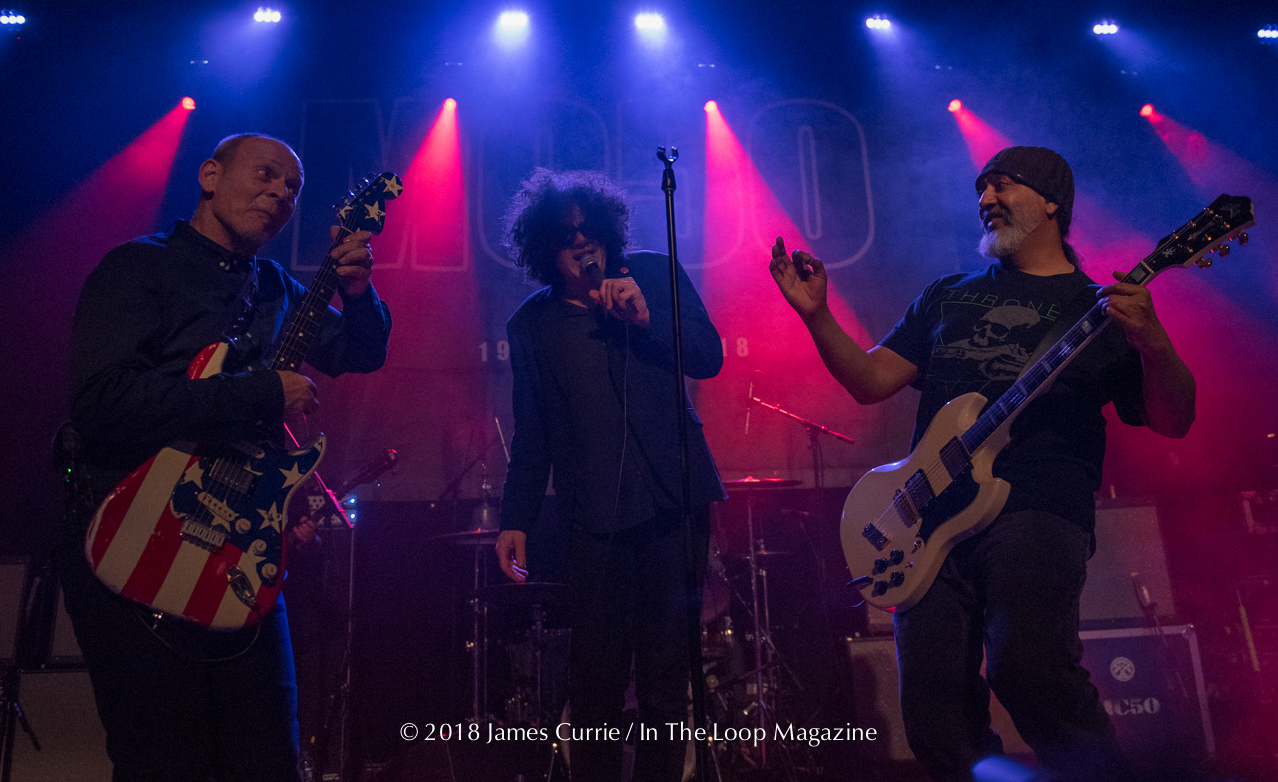 Singer, songwriter, guitarist, activist, Wayne Kramer may be the last of the original MC5 lineup that started over 50 years ago, but that doesn’t stop him from honoring the legacy. The Detroit Michigan based rocker and his band shook the foundation of what was happening in rock music in the 1960’s like no others. The Motor City 5 were forging a new sound that punk rock would later take as their own. This year marks the bands 50th anniversary of their landmark album, Kick Out The Jams. Kramer, who now somewhat resembles filmmaker John Waters, has assembled a supergroup of musicians and grand tour to support it all.

MC50, as this tour is being dubbed, played at Wrigleyville’s favorite independent nightclub, Metro. While the venue may not have been around the first time (as a rock club) back the late 1960’s, it made up for it this time around. Kramer brought a powerful backing band to match the bands fierce sound. Soundgarden’s (Chicago raised) Kim Thayil takes on guitar swapping duties with Wayne Kramer. Banging out those machine gun beats on the skins and tins is Fugazi’s Brendan Canty. You can hear his bands influence in MC5. Faith No More’s bassist, Billy Gould keeps the rhythm going solid while Zen Guerrilla’s Marcus Durant takes on the lead vocals. Durant even looks the part as he dawns a most excellent fro. All together on stage, this ensemble works to convey the proto-punk punk Detroit sound.

They start the show off with “Ramblin’ Rose” and continue on right through their entire first album, Kick Out The Jams ending with “Starship”. Yes, the full album performed live in its entirety. And they didn’t miss a beat. Kramer ever still the wild man jumping around on stage, shaking his ass at the audience, throwing up his arm in the air with first high as he Townsends his American flag guitar windmills. The rest of the band stays subtle but tight as they let the man bask in the glory that he created 50 years earlier. They continued on with other songs from the bands three records before ending the night with “Looking At You”.

The audience at this show was just as on fire as the band. Fans ranged from late 40’s to late 60’s but age didn’t matter as several older rockers were pogoing up and down most of the night, throwing first in the air, body slamming and shouting along with each classic tune.

This tour may have started out as one of nostalgia, but seems to have taken on a life of it’s own. A new vision and direction with a familiar sound. Kramer seems to be on cloud nine when on stage. Age is not a factor here. He’s grinning from ear to ear, joking with the fans, taking his iconic rock star poses and giving it 110%. This is a man proud of his musical accomplishments and letting it be known.

Catching this show live is one that should not be missed. This was a performance to remember. If you were alive and kicking back then, you’d have felt it again. And for those of us who only knew the music through movie soundtracks, protests or radio play, this gave us a small sample of what their movement must have felt like and been about. You can see and hear what so many other bands have taken from this band’s legacy, stage presence and revolution that was MC5.