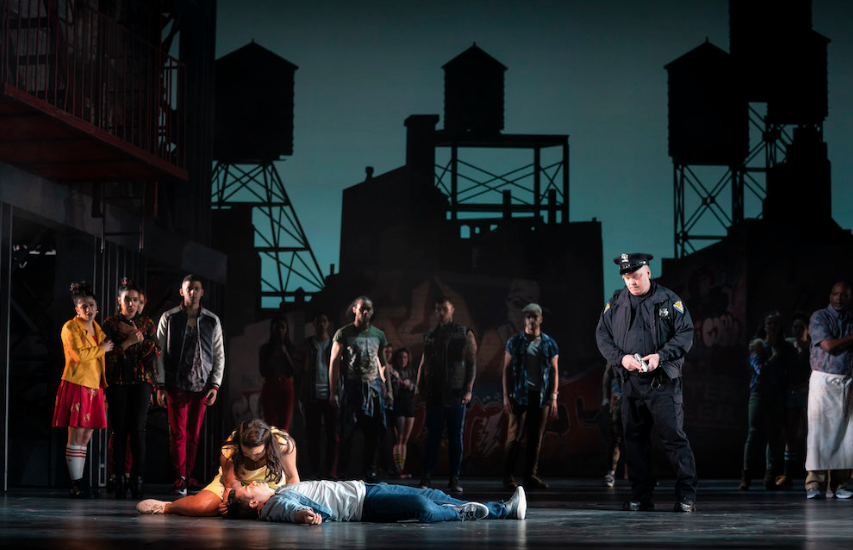 When I was a kid, I was a big fan of the ESPN program “Sportscenter.” In addition to the program’s fun anchors and deep sports coverage, I also delighted in the “This is Sportscenter” commercials – original ads that ESPN produced featuring its roster of anchors. Goofy and self referential, the commercials were also heavy on pop culture references, and in one, two rival factions of ESPN anchors were engaged in a street brawl, but rather than use weapons, they simply approached one another ominously, snapping their fingers.

I mention that commercial because it is, for me, the ultimate example of how ubiquitous “West Side Story” truly is, how the musical – with music by Leonard Bernstein and lyrics by Stephen Sondheim – has entered the zeitgeist; therefore, it is a testament to the Lyric Opera’s new production of “West Side Story” that the material still feels as fresh, vital, and exciting as when Jerome Robbins directed it on Broadway in 1957.

Although my introduction would, seemingly, undermine the need for a plot synopsis, it’s worthwhile covering the basics: a modernization of “Romeo and Juliet,” “West Side Story” focuses on the doomed love of Maria and Tony, two teenage New Yorkers from warring demographics. Maria, a recent immigrant from Puerto Rico, is the younger sister of Bernardo, the leader of the Puerto Rican gang The Sharks; Tony, meanwhile, is a lieutenant in The Jets, a Polish gang in the same Upper West Side neighborhood. Although deeply in love, Tony and Maria’s romance is not to last, and is undone by the endless manifestations of the gangs’ conflict.

There are many, many positives to Lyric’s production of “West Side Story,” and I will begin with the casting. Lyric has always casted top-notch talent in its musical theater productions, and with “West Side Story,” it has brought dynamic Broadway talents to the Lyric stage, many of them for the first time. As Maria, Mikaela Bennett is a gem, with a soaring soprano and plucky stage presence; as Tony, Corey Cott is effortlessly charismatic, with a strong, expressive tenor; and rounding out the leads is Amanda Castro as Anita, who is all fire and dynamism in a role originated by the legendary Rita Moreno. “West Side Story,” though, is a uniquely ensemble musical, and the full cast is chockfull of wonderful performers, all of whom handle Jerome Robbins’ legendary choreography with aplomb.

I also must praise Lyric’s production talent, which effectively balance the sophistication of the operatic hall with the necessary urban authenticity. Peter J. Davison’s sets are magnificent: towering high rises and chain-linked fences intermingle with neon signs and water towers, with all the elements switching and rotating to accommodate the shifting sets (the way Davison incorporates Maria’s bedroom is particularly virtuosic). Mark McCullough’s lighting is similarly masterful, with impressionistic shades of orange, blue, and purple capturing the night’s skies and accentuating the themes of the music; for instance, I can safely say that “Something’s Coming” has never felt as magical as it did on the Lyric stage, with Cott’s performance backed by a brilliant backdrop of orange and red.

And then there are the show’s politics, which director Francesca Zambello refuses to ignore. In today’s political climate – when such questions as citizenship, identity, and immigration are being debated with a frightening fervor – it is downright thrilling to watch such issues play out through the exuberance of dance. Puerto Rico is, for all intents and purposes, a colony of the United States, one that is continually shafted in its position (the recent hurricane very much brought those issues screaming to the surface); and in the end, there is something delightfully radical about seeing Puerto Rican culture so unabashedly celebrated in a space as grand as Lyric Opera, and the talents involved are to be commended for doing so.