In The Loop, On The Road Series: Avatar Country, A Cross Country Journey 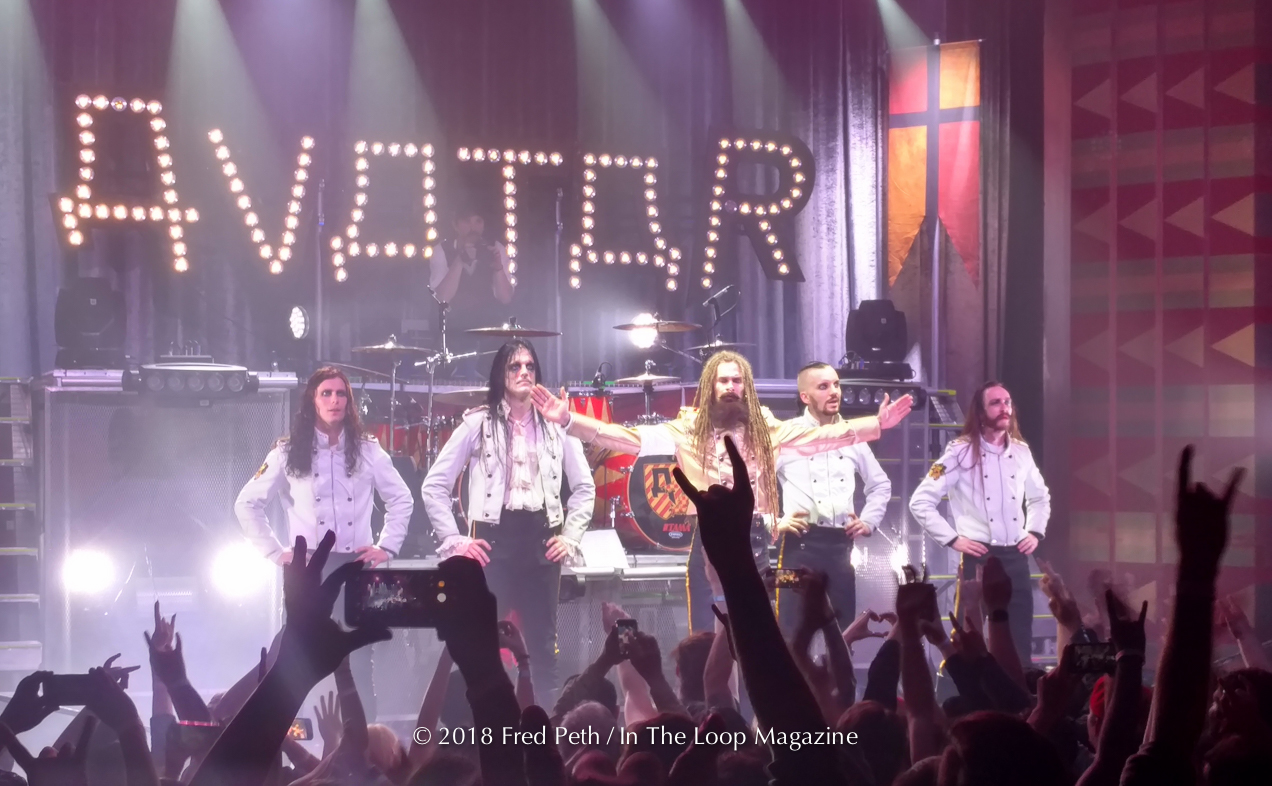 4778.8 total miles traveled to five cities in four states all within two weeks to see one incredible band play five shows headlining their worldwide tour! My first stop was Houston, Texas. I flew in early enough to get some bbq at a restaurant a few blocks away from House of Blues before the show. I walked over to the venue a few hours before the doors opened and luckily Jonas “Kungen” Jarlsby a.k.a ‘The King’ was standing outside. I said hello to him and told him I was just flew in from Chicago and was excited to see the show tonight. We briefly talked about my plan to see their other shows in Dallas, Tempe, Los Angeles and Chicago on this tour and about their unfortunate cancellation of their show the night before in New Orleans. Jonas is always cordial and gladly said “yes” when I asked him if we could get a picture together.

I have only seen photos of this House of Blues and was pleased to see it firsthand. Once I walked inside the building I knew it was going to be an awesome show, since I was one of the handful of people who arrived before the rest of the crowd showed up. To keep the crowd entertained, while the crew was setting up Avatar’s stage set behind an enormous floor to ceiling flag of Avatar country, they played audio from the different stations of Avatar radio over the speakers.

We started yelling and cheering once the flag dropped to reveal a banner with the lyrics from the song “Glory To Our King” draped on both sides by a banner of the King’s image on it. The crowd sang along with the audio of the opening song. Once the song was finished the banners instantly dropped to show their great new stage setup. I decided not to find video of previous shows online, so I could be surprised to see what the band had planned for this tour. They sure did not disappoint.

The stage was set up with stairs on both sides of the drum riser that connected together to a platform behind the drums with their ‘Avatar’ lighted sign above the platform. Facing the stage, Henrik and Tim were posed like statues on the left and right at top of the stairs respectively as fog, red lights and a beeping sound added to the visuals. Henrik and Tim slowly walked down the stairs, as they were soldiers just created in an industrial warehouse. Once they were on the stage they faced the area behind the drums. We watched the entrance of Jonas, hidden behind the drums, as he was cranked upwards on his throne, waving to the crowd as he wore a cloak over his shoulders and a crown on his head. Jonas started the show with a most glorious riff that only a king could produce. John quickly joined in on the drums and the four of them instantly got us into a frenzy. The crowd got louder as we saw Johannes walked onto the stage.

The crowd instantly went into hysteria with our ‘horns’ in the air as Johannes belted out the lyrics to “Legend Of The King” from the center of the stage as the played excellently behind him. Included in the night were “King’s Harvest”, “The King Wants You”, A Statue Of The King” and “The King Welcomes You To Avatar Country” four songs from their latest album creation “Avatar Country”. Not taking themselves too seriously and showing their fun on the stage, the band even had bubbles floating in the air during “The King Welcomes You To Avatar Country”. Another song I have not seen performed live was “Puppet Show”. Keeping it fun for themselves and the crowd, Johannes and John playfully interacted at the beginning of the song, as John was Johannes’ marionette. In the middle of the song our frontman played a trombone showing another great talent of his.

The band even broke out with two truly in your face metal songs. “War Song” from their 2006 album “Thoughts of No Tomorrow” and “Reload” from their 2009 self-titled album. Even though the crowd did not seem too familiar with them some of the crowd gave a great response by moshing, while the rest of the crowd headbanged with their arms in the air. The band started off the song “Raven Wine” as Johannes donned a headdress, that I could only imagine came from the ancient times of the country of Avatar.

The band quickly transitioned from “Smells Like A Freakshow” into “A Statue Of The King” with Kungen taking the middle of the stage to whip his hair as he trashed on the guitar. Being one of the newest videos from the band, the crowd did their homework learning this song. Along with the bubbles during the performance of “The King Welcomes You To Avatar Country” the band changed into formal white jackets, except for Kungen who changed into a gold jacket, welcoming the new addition of citizens to Avatar country. A well-loved and heavy song to close out the night was “Hail The Apocalypse”. The whole crowd was singing along knowing that this would the last time they would see this glorious band until they decided to once again grace us with their presence. The song was only officially over when the “King” gave us a ‘thumbs up’ showing his approval of the crowd’s enthusiastic response of the night.

I flew to Dallas the next morning looking forward to another great Avatar show! After getting some food and taking a nap, I arrived to the venue before doors opened. I love seeing shows as close as I can, so I was excited to be able to see another Avatar show from the front and center of the barricade. As Johannes mentioned during the show, Houston had a “Houston cool” vibe to it. I could attest that the Dallas crowd was a little more rowdy, as there was some crowd surfing that actually made it over the barricade.

The band sounded just as great as the night before. The interaction of the crowd screaming to the band was awesome to see in a different city. Watching the band thrash their hair around as they played got the crowd’s attention. With more people in attendance there was more circle pits during the faster songs of the night. It was fun to see Avatar two nights in a row and to be able to see them three more times on this tour.

The next morning I flew out to Phoenix to spend a couple of days with some friends before the concert at The Marquee Theatre in Tempe. Surprisingly, the Avatar show would be my first time seeing a show there. I went to numerous concerts when I lived in Arizona, but The Marquee Theatre was the Red River Opry at the time when I was going to Arizona State University and booked mainly country acts. It was not until after I moved back to Illinois that it become what it is today.

I decided to purchase a ‘Front Of The Line Access Pass’ that got me to where I love to be for concerts. Front and center against the barricade and I could not be happier. I was excited to see a large enough stage that can house Avatar’s new stage design. The crowd was screaming “Avatar” over and over again as the curtain dropped to open their set. It was exciting to know what songs were going to be played before the rest of the crowd. John, Tim, Jonas, Henrik all played exceptionally well and Johannes’ vocals sounded just as strong. I knew I was on a great adventure and I did not want it to end the next night in Los Angeles.

I had to catch an early flight out to Los Angeles to see the last of four Avatar shows in six days. This time around I also bought a ticket for a friend to see if I could get him to become another Avatar follower. This was also my first time at The Regent Theater in Los Angeles. The Regent is the oldest remaining theater on South Main Street. I knew this was going to be an intimate show since the building has been around for years and walking into the nice small venue reassured my imagination.

Even though the stage was much small than Houston, Dallas and Tempe, Avatar’s full set barely fit on the stage. It was shoe horned with no much room on the sides of the stage to walk from the front of it to the back. Another special moment from the night was to know that this was the first time the band headlined in Los Angeles.

My fears came true when my friend and I walked into The Bottom Lounge for the show. I have been to the venue a few other times and knew that the stage was small. When I did not see the big circus tarp covering their stage setup during the opening acts, I knew they would not be able to construct it for the night’s show. All that there was room for was their ‘Avatar’ lighted sign behind the drum riser. That did not stop the band putting on another outstanding performance for the sold out crowd.

I loved having the opportunity seeing the bands in all the other venues, but it was great to getting back home to Chicago and seeing them in front of a true metal crowd. The crowd was more involved knowing their songs and screaming to them. This was also the band’s first time headlining in Chicago! The lighting design of all these shows was a great addition to the music and the theatrics of each night. I hope they get back to Chicago in 2018 to play a bigger venue, so they can use their whole set. I think this world tour that they are on will prove to the bigger venues in Chicago that they need to book Avatar!

For more on Avatar, the current tour and new music, click here