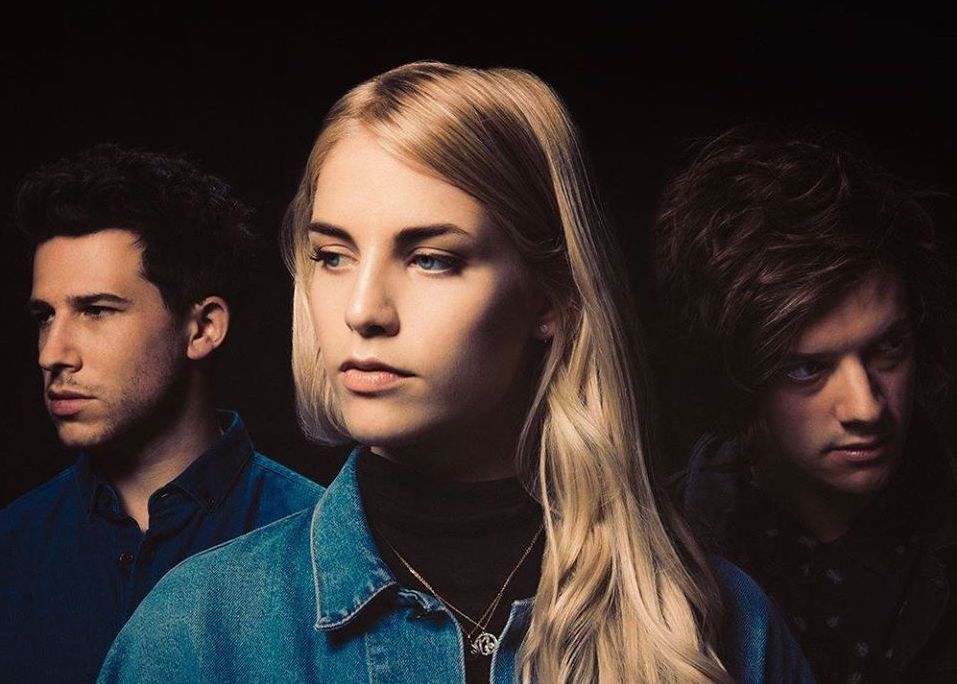 It’s a packed house in close quarters, no distance – social or geographical – exists between fan and band, blissfully sharing the unification ceremony once known as a rock concert. According the ancient scriptures, these were orchestrated gatherings of kindred spirits, huddled masses that would assemble and exalt minstrels, troubadours, artists imbued with the ineffable gift of groove and word. The camera lens captures a figure materializing from the shadows. She appears soft as the crepuscular rays following her to center stage. As London Grammar’s co-founder and luminous lead singer, Hannah Reid, caresses the mic and sidles into the opening, acapella bars of their riveting single, “Hey Now,” all eyes fixate on the blonde siren as she serenades a thousand souls ensconced in the moment, not to mention a lone middle-aged writer six years hence, locked down inside his Las Vegas apartment like Andy Dufresne in Shawshank.

Excuse me for awhile, I’m wide eyed and so down caught in the middle.

The inspiring ballad, “Strong,” was my LG deflowering; shuffled into my earbuds via Apple Music’s chill mix, my go-to morning yoga/meditation channel. I was instantly disarmed by the emotional quiver in Ms. Reid’s dynamic delivery. The band’s 2013 immaculate debut, If You Wait, has a genuine rubber soul; a tenderly woven tapestry of brave, bloody, beautiful ballads, like the self-effacing, “I’ve Wasted All my Young Years.” I suppose the lament cuts far deeper to an aging reporter whose wasted his entire mid-life rattling about the rabbit hole of his own frightful solitude. Discovered Lana del Rey via the same chill salad and devoted an entire year into deep diving her immense, remarkable catalogue. Sad core to the core, am I. Hannah and Lana, along with the divine Ms. (Florence) Welch compose the songstress trinity whose woeful, oft times, rapturous serenades have warmed my cockles for some time. My LG education has gotten AP intense since the pandemic scuttle. I’ve been getting choked up by songs since Lennon cautioned us to hide our love away years before my first pubic hair arrived.

“Help Me Lose My Mind” from UK groove master’s, Disclosure’s, 2013 debut, Settle, is made positively ecstatic by the guest appearance and influence of the enchanting Ms. Reid. Sheer head bobbing, toe twitching joy and then in an aorta bounce/ algorithmic segue, we are seduced into near paralysis by the track, “Rooting for You,” from the band’s 2017 sophomore effort, Truth is Beautiful Thing. Off that same bewitching platter, we get a glimpse of the “Big Picture,” as co-founder Dan Rothman’s Edge like axe drives the beat and fills the space waiting to be occupied by his creative coconspirator’s heavenly pipes. Truth, thy beauty is under daily assault in this lying, dying culture. Noble themes often ignored in these ignoble times. Are you hip to Hanna, the brilliant, futuristic, conspiratorial Amazon Prime series based on the audacious 2011 motion picture? Season two fades to black over LG’s “Here’s to the Liars,” perhaps the truest showcase of Ms. Reid’s expansive vocal range.

Back to the egg (album one), melancholy machinations are evoked with “Night Call.”

“There’s something inside you, it’s hard to explain,” moans the muse over Dominic “Dot” Major’s tribal skins. “I’m gonna tell you something you don’t want to hear.” Oh, pity the poor bastard who fucked up and let Ms. Reid get away. Dumb fuck obviously squeezed too tight. Clutch a dove a closing fist, the bird will surely fly. Love and trust require both palm and heart be wide open. “Oh, Woman, Oh man,” another explosive existential offering where the truth is laid out in vicious, vibrant phrase, echoing, atmospheric, aching. “Do you really understand?” she asks (howls), her tonsils drenched in winsome desperation. The lyrics are steeped and sourced in deeply personal process. Can you feel her angst? It’s downright operatic. Hey, dude, if you don’t REALLY understand, take a hike. She’s too good for you, anyway. Too good for most of us.

Hannah Reid is the melodic mother of dragons, fierce, commanding, yet precious, even fragile. In “Non Believer,” her method and message have both evolved. “All that we are all that we need, they are different things.” Swaddled in emotive cloth, the musician’s charge, melodic inquisition, feels good to the ear and heart. “Stay Awake,” and the masterpiece, “Strong,” which bring us full circle to the end time’s here and now. The terror that accompanies formerly mundane exercises like going to the grocer or filling the gas tank, has become terrifyingly palpable. No more hugging, touching and squeezing on this quarantine journey. Mask up, citizens, and don’t dare breach my imaginary six-foot floating sanctuary. Be mindful, sanitary, hyper-sensitive in our public expression and most of all, caring of others. Really? Aren’t we about 200 years too late for that? The industrial revolution beget the technological revolution and we’ve got zero solution for the orange tinted Zombie apocalypse. Welcome to the fall of the Oh Man Empire, destroyed from within. I was raised in that distant age, when people were smart and phones were stupid; before men shaved their heads and women tattooed their arms. Past few decades, it’s gotten really difficult to distinguish right from wrong; fright from strong.

Britain’s venerable Guardian posted a revealing profile of the band on June 8, 2017. Reporter Hannah J. Davies wrote, “’The exhaustion really kicked in for me after a year,’ says Reid, a friendly but unshowy frontwoman. Her battle with stage fright has been widely reported, but the effects of success were physical as well as mental. ‘I spent the second year pretty much just hanging by a thread – I didn’t really know what was wrong with me. Then I just got used to feeling that way and I was like: ‘I must have some kind of illness, I must have chronic fatigue syndrome.’ I got tested for a whole bunch of stuff, it got kind of weird.”

Did you know that GN’R’s celebrated front man, Axl Rose, suffered from paralyzing stage fright in the Appetite for Destruction ‘80s and well into the global touring Use Your Illusion ‘90s? There were legitimate reasons for the group’s notoriously late set times; the singer just wasn’t mentally ready to rock the house, especially when those houses got to be stadium sized. Ms. Reid has yet to experience crowds of that magnitude but have no fear, London Grammar has just begun to roar. They will not go quietly into that good night, no matter how dark it gets.

Let’s be honest. We are currently, collectively scared shitless, paranoid, freaked out, clueless, leaderless and the future looks like post apocalypse survivor, Henry Bemis, busting his glasses at the end of the “Time Enough at Last” Twilight Zone episode. Music. That’s where our strength lies. So perch Ms. Reid atop the highest mountain in the land, arm her with the state of the art dystopian big brother megaphone to end all megaphones and let her wail into the ether so loud and clarion clear that the angels will hear, take notice, descend to Earth and save our sorry asses; well, at least the ones worth saving; the music folk guided by voices not vexed by vices.

This is how we survive humanity’s longest, darkest viral night when millions perish, economies crumble and the foundations upon which all that we’ve known and experienced in our lifetimes shutter like cracked seashells on a storm rocked beach. We get collectively and consciously wide eyed, caught in the middle, so there’s nowhere left to hide but inside the chords and notes of salvation’s song.

We must suffer and grieve while simultaneously rejoicing the imminent, imperative shift. Accompanied by our music, that which abides, survives and resonates. Intimate, rhythmic elixirs, helpful to the chakras; the whole kit n’ kaboodle. We have no leaders, no hopes, no resources, no money, (apologies to Henry Miller) but perhaps we are the happiest folks alive? Then again, as Ms. Reid puts it,

We need to give our children a healthy planet. It’s that simple. Healthy enough again for communion and performance, proximity and parade, crowds and touch, sweat & tears. Soon as the coast is clear, and it may not be in my lifetime (I was a Celtic priest in a past life; got that from two different seers) London Grammar will book a gig somewhere on this dissolving asteroid and I will be there, in the pit, as the poetess’s pendulum swings.

MUSIC INDUSTRY GIANTS URGE CONGRESS TO SAVE INDEPENDENT LIVE MUSIC AND COMEDY VENUES BY PASSING THE RESTART ACT Uncle Al Wants YOU To Vote! Ministry Puts Political Roots Into Action Launching 2020 Campaign With Autographed Memorabilia For Fans That Get Ready To Voice Their Choice