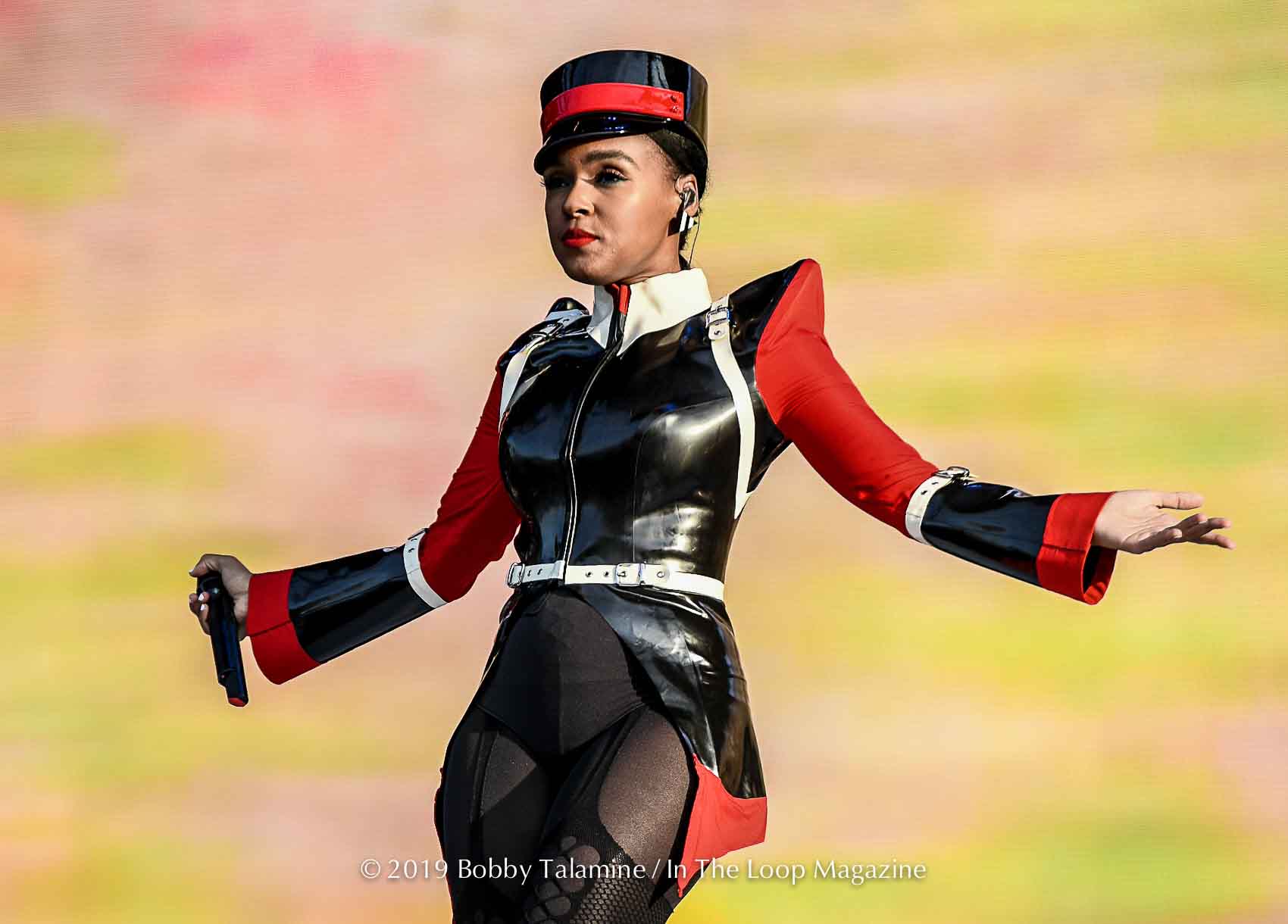 Imagine, if you will, the epic opening to Janelle Monáe’s sensational Lollapalooza set: a large white podium, with steps ascending to a platform, sits in the stage’s middle; various instruments are ready to be played; and then, smoke – it starts billowing out from the stage’s sides; and then, music – Richard Strauss’ epic “Also Sprach Zarathustra” (aka, Kubrick’s theme from “2001: A Space Odyssey”) begins seeping from the speakers, and as that iconic melody reaches its climax, Monáe enters the stage, dressed head to toe in a custom outfit that commands respect.

It only made sense, therefore, that Monáe eventually performed her now-classic song “Q.U.E.E.N.” at the fourth track in her set, because her appearance at Lollapalooza only reified her status as a high-ranking royal in American music; indeed, during a remarkable performed of “Screwed,” off her 2018 album “Dirty Computer,” Monáe’s dancers placed a legitimate throne upon the white podium, upon which Monáe sat. And make no mistake – although “Screwed” was only the second song in her set (Monáe opened with “Crazy, Classic, Life,” perhaps my favorite song off “Dirty Computer”), it already well established that she deserved every bit of ecstatic valorization that the crowd heaped her way.

Simply, every aspect of Monáe’s set was sensational: her voice, which effortlessly transitions from soaring, high-octave acrobatics to incredibly precise rapping; her band, which (sans her excellent guitarist) was composed entirely of black women, and was as sharp and attentive as any rock/R&B band on an American stage; her choreography, which included four other dancers (also black women) and perfectly complemented the themes of her songs, be it sexuality, cultural pride, or emotional purity in the Internet age; her interplay with the audience, which ranged from cues to political statements; and lastly, to her overall aesthetic, which involved several costume changes and arrangements that bordered on performance art. For years, I have heard of Monáe’s live prowess – her unmatched consistency, her willingness to take risks, her audaciousness – but even that did not prepare me for what I experienced on that Lollapalooza stage.

Political Music in the Age of Trump

Special mention should also be made to the unabashedly political tone of Monáe’s set. From her open salutes to the LGBTQ community, to the sexuality of her choreography, to a mid-set address to the crowd that included a call for Donald Trump’s impeachment, Monáe’s politics were as much front and center as her music, and the two fused brilliantly into a statement – a manifesto, if you will – on making art as a black woman in the America of 2019.

Which is what made the headliner set of Childish Gambino – the performing name of actor Donald Glover – so utterly confusing. Originally a star on NBC’s “Community,” Glover has released three albums under the Gambino name, and all have been proficient (if hardly revolutionary) albums of hip hop and R&B. And that, from my vantage point, largely describes the set that Glover delivered, at least on musical terms: his voice (especially on the opening “Atavista”) was occasionally dazzling; his backing band and singers were all first rate, even if they were largely obscured by the (admittedly interesting) lighting that Glover employed; his stage presence was goofy and engaging, with fun dance moves and wide-eyed expressions; and the music was perfectly fine for a summer evening, but miles away from any true innovation in today’s hip hop/R&B climate. That latter point was particularly notable with the tracks from 2016’s “Awake, My Love!”, which are mere facsimiles of far superior works from Prince and George Clinton (and as a point of comparison: I watched 78-year-old Clinton deliver a set at the Aragon in early June that was, musically, far more visionary and incendiary).

Reviewing a Donald Glover performance, however, means engaging with far more than the artist’s music, and that is where my confusion festered that second night at Lollapalooza. Starting with his FX series “Atlanta” in 2016 and reaching its apex with his 2018 single “This is America” – which, at the time of this writing, has racked up an astonishing 577,714,194 views – Glover has increasingly posed as a uniquely political, uniquely woke artist, one who is unafraid to speak his mind on increasingly bombastic terms. Consider this quote from a 2018 profile of Glover in The New Yorker magazine, in response to whether there is “anything” he is bad at:

“To be honest, no. Probably just people. People don’t like to be studied, or bested. I’m fine with it. I don’t really like people that much. People accept me now because I have power, but they still think, Oh, he thinks he’s the golden flower of the black community, thinks he’s so different. But I am, though! I feel like Jesus. I do feel chosen. My struggle is to use my humanity to create a classic work—but I don’t know if humanity is worth it, or if we’re going to make it. I don’t know if there’s much time left.”

“This is America” had yet to drop when Glover made those remarks, but it’s easy to make the connections between those comments and the resulting music video, which is a no-holds-barred assault on such topics as racial inequality, police brutality, and white supremacy. For instance, the heady, knotty video features such images as: Glover wearing pants that harken back to the Confederacy; Glover using a machine gun and mowing down black worshipers, a la Dylann Roof; a police car being led away by the Grim Reaper, and Glover running, terrified, from a lynching mob.

There are certainly points of a contention with Glover’s statements and politics – and I say that as someone of the far left – but this is not the space to engage with such thinking; rather, for the purposes of a Lollapalooza recap, it is very worth pointing out that none of the aforementioned political positions – none of the messianic zeal, none of the salvos against white supremacy – were present in any shape or form during Glover’s set, which not only prominently featured “This is America,” but is only the latest stop on Glover’s latest tour, which is called (wait for it) the “This is America Tour.”

Does Glover have an obligation to make his concerts political? Of course not. I have seen more than 10 acts thus far at Lollapalooza, and Monáe’s has ben the only one with ardent political tones. Yet, consider what happened when the opening moments of “This is America” began playing at Lollapalooza: the largely white crowd erupted with rapturous glee, and began jumping and dancing to the music and singing its various phrases (including the opening verse from Young Thug). The song played out, with Glover dancing and interacting with his band, and then it ended; Glover retreated to the side of the stage, beckoned the crowd for an encore, and then returned and began playing “Sober.” There was not even a faint whisper of the political in the performance.

So what is my point, with all this? To point out that it is impossible, at this point, to separate Glover’s politics from his art, given that he himself has merged them in such public, spectacular ways. And knowing that, it is incredibly confusing to reconcile the Glover of the Lollapalooza stage – apolitical, goofy, dancing, looking to have a good time – with the Glove who makes the following remarks to The New Yorker: “Blackness is always seen through a lens of whiteness—the lens of what white people can profit from at that moment. That hasn’t changed through slavery and Jim Crow and civil-rights marches and housing laws and ‘We’ll shoot you.’”

Perhaps Glover is still figuring out a way to make his Childish Gambino performances political; perhaps he just wants to have a good time; perhaps he is compromising on those politics for the sake of a payday (Lollapalooza headliners make millions for their sets); perhaps this tension is visible in other aspects of his art, which include roles in the Star Wars “Solo” spinoff and recent “The Lion King” reboot. All I know is that Glover’s set, and its many irreconcilable parts, was deeply confusing – especially coming after Monáe’s magnificent set, which proved how brilliantly political manifestos can be delivered through musical mediums.