Lollapalooza, Day 1: Kings, Hobos, and the Profundity of Live Music 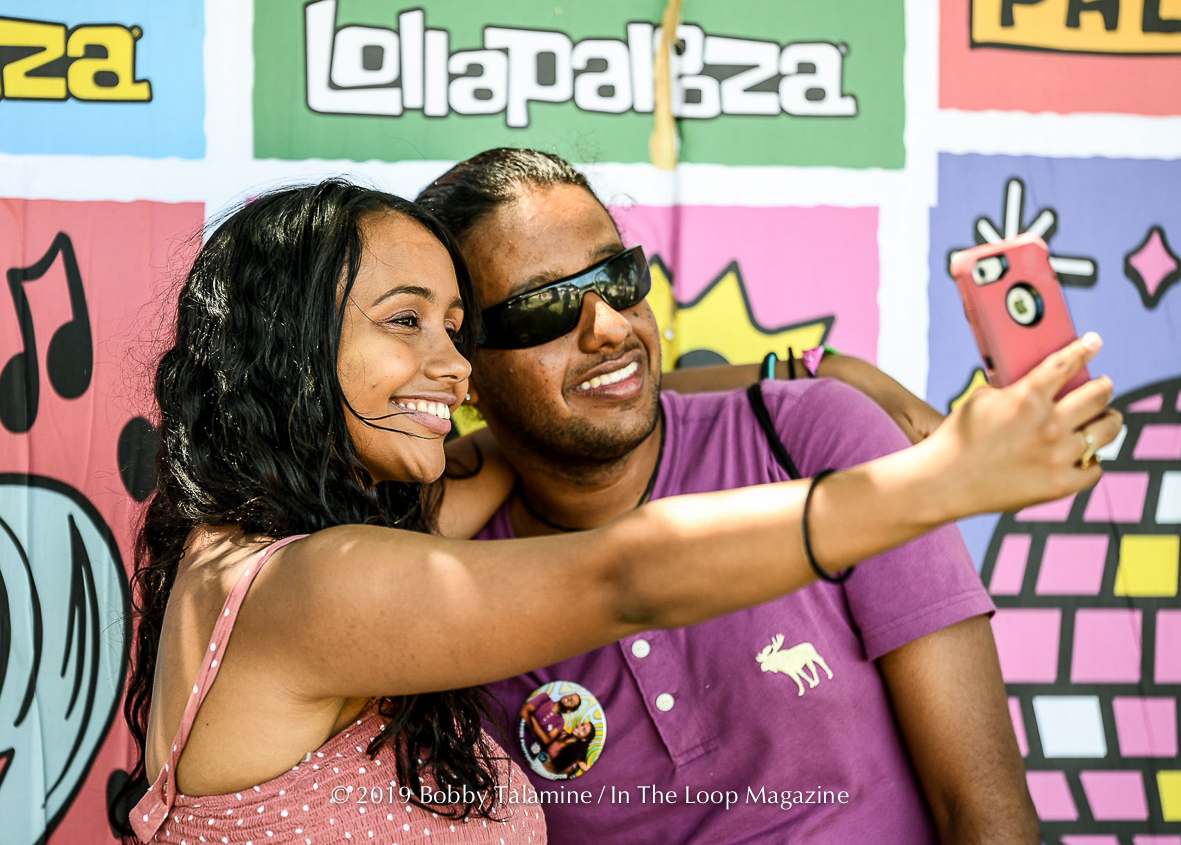 The first thing you notice about Lollapalooza is the sheer enormity of it all. Sure, most (if not all) Lolla write-ups mention the fact that the epochal music festival consumes Chicago’s Grant Park for four days, but what gets left out of those statements is the physicality of the space – just what it means for a music fest to take place across 312.98 acres.

Here is a short anecdote, to demonstrate what I mean: the press check-in for Lollapalooza is at Michigan Avenue and 11th street, the southern-most end of Grant Park; upon checking in, getting through security, and swinging through the press lounge for a snack, I was due at the Tito’s Handmade Vodka stage at 1:45 for a performance from the effervescent Emily King. The hitch? The Tito’s stage is at the northern-most section of Grant Park, so getting there meant traversing, on foot, the entirety of Lollapalooza across Columbus Drive: it meant crossing Hutchinson Field in its entirety, where the two biggest stages – T-Mobile and Lake Shore – are established; it meant walking past a T-Mobile pop-up shop and Perry’s, another performing space generally reserved for dance/electronic artists (and of course, named after Lolla godfather Perry Farrell); it meant walking past seemingly endless sequences of urinals and porta potties; it meant walking past the Red Bull Outpost, and the Revlon Ultra Rollerama; it meant walking past bar stands so numerous they appeared to self-multiply, and a marathon of local restaurant stands that included such local favorites as Lou Malnati’s, Pizano’s, Chubby Wieners, Fatso’s Last Stand, Billy Goat Tavern, Budlong Hot Chicken, and Robinson’s No. 1 Ribs; it meant walking past Buckingham Fountain and the North & South Rose Gardens, which have been converted into a fantasy land that includes the Cupcake Vineyards’ Wine Lounge & Frozie Factory, Kidsapalooza, Neighborhood of Good by State Farm, Jack Daniel’s No. 7 Photo Experience, Toyota Paradise Park, the Lolla Shop, ASICS Underground, and more; it meant walking past the American Eagle and BMI stages, HBO’s The Righteous Gemstones, and “Lolla Cares,” a sequence of tables for organizations committed to different social causes; and it meant walking past the Bud Light Dive Bar Sessions, the Pantene Styling Lounge, and the Toyota Music Den. And all this traversing, of course, is happening amidst an enormous swelling of people numbering in the tens of thousands, with folks walking hand in hand, darting across the streets, waiting in line for food and drinks, sitting curbside, laughing, screaming, joking, cajoling – it truly is an experience like none other, and thankfully, Emily King made the fantastic voyage entirely worthwhile.

I first saw Emily King perform as the opening act for Alabama Shakes at the Aragon, amidst the band’s tour for “Sound & Color.” Being an opening act is, often, a thankless task – a good chunk of the audience is not even there to being with, those who are there may have never heard your material, and your set time is inherently limited to make way for the headliner – yet amidst all that, King owned that Aragon stage, and I left the space amazed at the talent I had just experienced.

What is it about King that makes her so magnetic? There are her songs, of course, which are pop gems with insatiable hooks, nuanced arrangements, and expert pacing (for instance: after hearing it for the first time, I listened to “Remind Me,” the debut single off her newest album, at least 10 times on repeat). But when it comes down it, King distinguishes herself through her stage presence, which is among the most dynamic of any performer I have ever seen. Through her movements and choreography, which strike a remarkable balance between precision and spontaneous fluidity, King commands attention across the entire stage, with even the subtlest of gestures – such as removing the mic from the stage – inspiring grand reactions from the audience. To watch King perform – to see the stage as a truly horizontal performing space, to see her expert timing, her unyielding smile and joy – is to watch a fully realized stage persona, one crafted and refined across the nearly two decades. It the best way that one’s Lolla experience could begin.

Hobo Johnson and the LoveMakers

I stuck around the Tito’s stage for the following act, Hobo Johnson and the LoveMakers. Led by Frank Lopes, Jr. (Hobo Johnson, professionally), the group’s sound was a pronounced departure from the 80s-tinged pop of King, and instead an embrace of jangly, mildly disturbing, brutally honest punk-rap. With arrangements as naked and open as his lyrics – the songs generally feature direct refrains on keyboard and guitar, with minimal percussion – Johnson embarked on stream of consciousness lyrics about everything from his difficult relationship with his father (Johnson was kicked out of his family home at 19, and subsequently lived out of his car), the frailty of personal beauty, the futility of love and relationships, and even a post-nuclear fallout America where cockroaches evolve into humanoid beings. It’s dark, despairing material – exhaustingly so, at times – but Johnson’s set marked the performance of a unique talent, and I am interested to see how his sound grows and expands in the coming years.

Seeing H.E.R. perform entailed retracing my earlier journey and returning to the T-Mobile stage, but as with that previous voyage, the trip was well, well worth it.

When H.E.R. – the performing name of former child prodigy, rising R&B star Gabriella Wilson – began her set with “Carried Away,” she entered the stage wearing her trademark sunglasses and playing an acoustic guitar. As she tore into the material with her soaring vocals, H.E.R. switched to an electric bass, and began laying down beats; then she began playing on an electric keyboard, laying down shimmering chords and runs; and then finally, she closed out on a drum machine. H.E.R. has said in interviews that this is the era of the “anti-star,” and that her efforts to obscure her identity (with her sunglasses, for instance) effectively place her music front and center; and while that was certainly true throughout her beautiful set, the multi-instrumental character of “Carried Away” was, nonetheless, a perfect introduction to a truly remarkable talent.

There were moments of brilliance all throughout H.E.R.’s set, from her Prince-inspired guitar soloing in “Lights On” to her absolutely-lights-out cover of Lauryn Hill’s “Ex-Factor,” but for me, the set reached stupefying heights with a three-song medley in the set’s middle, when H.E.R. transitioned from a cover of Deniece Williams’ “Free,” to “Best Part,” to finally, an achingly beautiful rendition of “Nothing Even Matters.” Listening to H.E.R. and her band perform – the sparkling neo-soul sound, the warm and welcoming vibes, the marked sincerity and depth of feeling – was quite moving, and I eagerly await new material from this rising, talented artist.

Throughout the performance by Chicago rapper Saba, a large screen behind the artist and his DJ (the superb Dam Dam) displayed a refrain: “Saba Cares For You.” It was an apt message, because through his 45-minute set, Saba displays a charisma and chemistry with the audience that was as effortless as it was energizing. With remarkable flow and clarity – few things are more depressing than rappers who are unable to perform their intricate rhymes in a live setting – Saba tore through such tracks as “How You Live,” “Photosynthesis,” and “World in my Hands,” which featured a guest spot from St. Louis rapper Smino (indeed, there were other, equally strong guest appearances throughout the set).

One of the main joys of music festivals – indeed, the kind of joy that helps one overcome the many frustrations of music festivals, from the incessant talking from some goers to PDIs (public displays of idiocy) – is discovering new artists; simply, it can be magical, hearing sounds and textures that you may have never experienced, had you not been there, in that festival, in that specific place at that specific time. Such were the sensations I felt during the mesmerizing set of FKJ, or French Kiwi Juice, the performing name of multi-instrumentalist Vincent Fenton. Through his innovative usage of the Ableton looping software, Fenton produces swirling, funky-as-hell soundscapes entirely on his own, many of them incorporating four of five instruments. An example: Fenton begins with his voice, manipulating it in certain ways to speak percussive beats into his microphone; then, as that beat loops, he uses his hands, clapping at three different pitches to further deepen the beat; then, he begins laying down a funky-as-hell guitar beat, further developing the beat until it becomes an organic, self-sustaining groove; and then finally, he plays on top of it all, first that with saxophone, then with keyboards, as the electronic funk sounds washed over the hypnotized crowd. For years, I have been enthralled with the looping capabilities of Chicago’s own Andrew Bird, who creates pocket symphonies through his virtuosic whistling and violin playing; with FKJ, I was downright giddy at his limitless creativity and the further implications of the looping technology, and I guarantee this is not the last time I have seen him live.

Given my overwhelming positivity, up to this point, of all the various musicians I saw perform on Lollapalooza’s first day, it would only make sense for my recap to conclude in a similar fashion – for me to write that The Strokes ended the night on an undeniable high note, and that Julian Casablancas and company sent the Lolla crowd out feeling good and happy and fulfilled. And while I’m sure that many Lolla-goers did leave The Strokes’ set feeling happy and fulfilled – they are a hugely popular group, and the T-Mobile stage was swamped with cheering fans – I can confidently state that there was nothing The Strokes did on that stage that overcame my long-running disinterest in the group.

It’s not that the band performed poorly; the core musical unit of Nick Valensi on lead guitar, Albert Hammond Jr. on rhythm guitar, Nikolai Fraiture on bass, and Fabrizio Moretti on drums was very sharp, and from the opening notes of “Heart in the Cage,” the band was spirited and rocking, with tight pockets and crisp lines. It’s also not that frontman Julian Casablancas was bad, in any way; he was in fine voice, even if his movements and overall stage presence were lethargic and uninspiring. No, for me, it’s a simple case of sound and reputation: The Strokes’ sound has never done much for me, and that disinterest has always smacked against the overwhelming praise the group received, starting with its debut album, “Is This It” (No. 2 on Rolling Stones’ top albums of the aughts!).

In his review for Pitchfork, Ryan Schreiber framed it nicely: “The Strokes are not deities. Nor are they ‘brilliant,’ ‘awe-inspiring,’ or ‘genius.’ They’re a rock band, plain and simple. And if you go into this record expecting nothing more than that, you’ll probably be pretty pleased.” And I suppose that, for me, has always been the rub: yes, this is a fine rock n’ roll sound that is fun to listen to, but would I ever take The Strokes over Big Star, the true deities of American rock? Any day of the year, would I ever listen to “Is This It” over Big Star’s “No. 1 Record,” or “Radio City,” or for that matter, the twisted, anguished brilliance of Alex Chilton’s “Sister Lovers”? Absolutely not. Those records – three masterpieces that not only captured the spirit of rock n’ roll, but expanded it into the dizzyingly brilliant directions that REM and countless other artists would follow – are the true gospels of American rock, and I saw nothing from The Strokes that altered, in any way, that liturgy. And with that, I depart to listen to “O My Soul.”

For photo gallery of images from Lollapalooza 2019 Day 1, click here