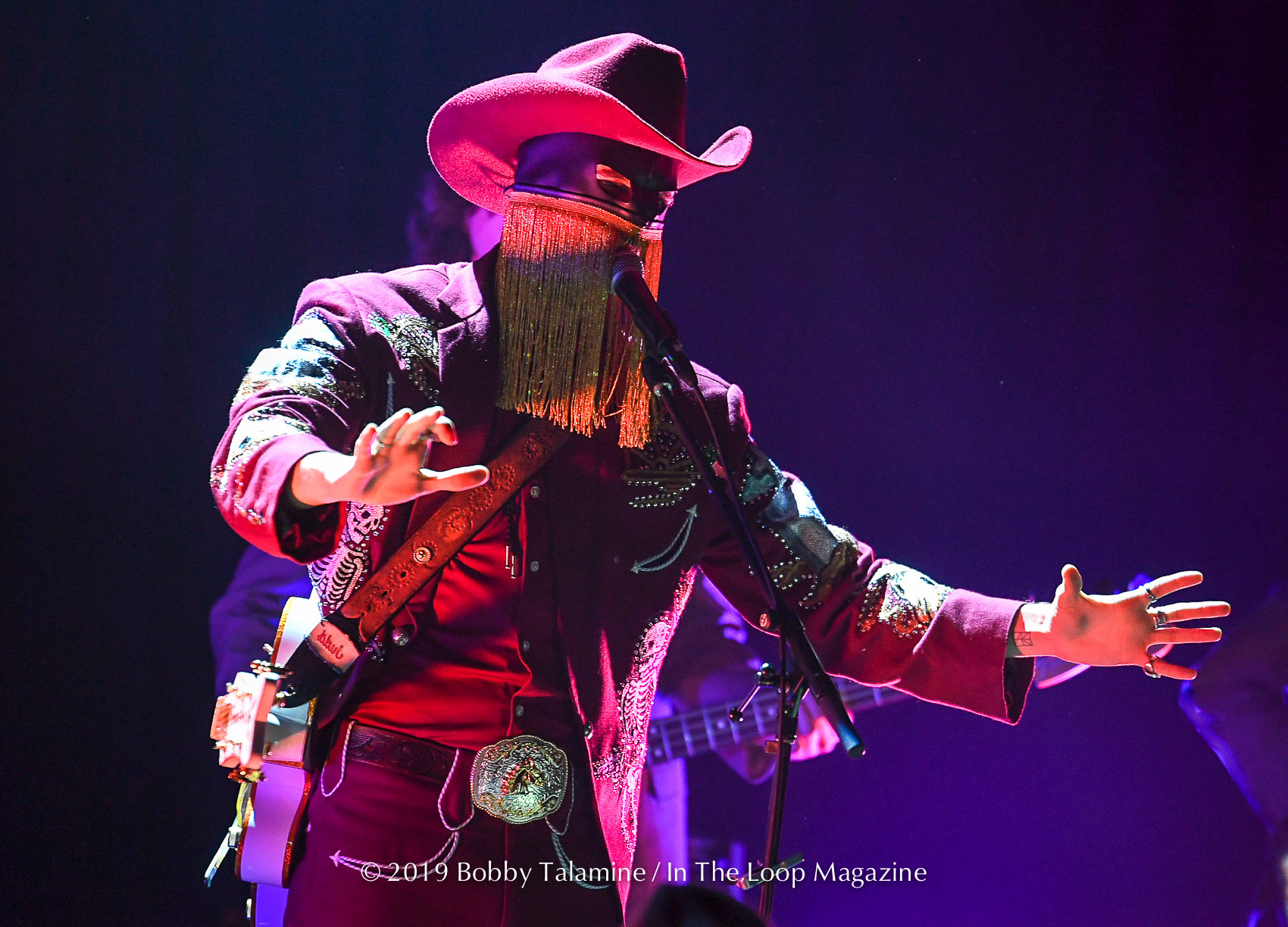 Let’s make one thing perfectly clear: it’s hard to pigeonhole Orville Peck, a guy wrapped up in mysteriousness- he’s definitely got the honky tonk musical chops down pat, can handle playing what I assume is a large white bodied Gretsch guitar with some serious twang, is blessed with a haunting, brooding falsetto of a voice that can break to a baritone and leave you weak at the knees, and on top of that, wears a get up that is all get out- a maroon colored two piece suit that’s embroidered with skulls and whatnot invoking a day of the dead kind of scheme, and that red ten gallon hat…and of course the Lone Rangerish mask embroidered with yellow fringe for this evening’s spellbinding show at the sold out Lincoln Hall in Chicago.

Not one part of Orville’s get up, let alone how his band is dressed in serious cowboy attire, is chintzy.

Everything in the presentation for this live show is purposeful, making sure that you know without a doubt that Orville means serious business, and the showmanship, the songs are invoking serious country music, with a wide range of influences, and you’d better take notice.

Orville has a modern take on all things country, with a tip of the hat to the glory days of the genre, and absolutely nothing to do with the country pop that makes most headlines in the present day.

Like everything else I discover when it comes to music in general, no matter what the genre: it’s their loss. No sympathy for the wimps who can’t and won’t discover new music.

So how did I first hear about the wonderment that is Orville Peck? Through Sirius XM Radio about six months back, and the the Saturday morning show on Sirius XMU called the “Download 15”, with the song “Turn to Hate”, which by all intent and purposes, is a show that basically covers all things Alt Rock and Indie, and not anything country related.

So here’s a guy who has breached that show with his take on country torch songs mixed with some rockabilly, some southern gothic, and dare I say when it comes to instrumentals in the mix, a bit of a post punkish attitude.

Now that says a lot about the man and his music, on full display at Lincoln Hall throughout his set.

Godamn if at times it felt like Lincoln Hall and the main floor was in the midst of a genuine honky tonk throwdown, even with the devoted LGBTQ heavy audience, who came out on this Saturday night with their own takes of serious fringe masks, peppered with an array of proud and in the moment drag queens in full regalia.

Clearly this was going to be a night of genuine fun and celebration- songs from the heart with a whipsmart band, an audience that enthusiastically approves of everything that’s “Orville”, and a special night that you can say from here and into the future- that you saw Orville Peck before he broke huge, playing to an intimate crowd at an intimate venue back in the day.

So suffice it to say that this show tonight was something special from beginning to end.

Have to say I’m  forever grateful to the packed crowd at the front of the stage, allowing me to to come into their domain rather late, and allowing me to shoot three songs and exit stage right. I never like to do this, trying my best to arrive on time and secure a place without much fuss. Previous commitments at another venue wouldn’t make that happen tonight for Orville’s show. I bring this up for a reason- Orville’s fans, the faithfully devoted, are extra special. Treat them and everyone for that matter, with kindness and genuine appreciation, no matter what the circumstances, and they will reciprocate.

Orville Peck- a guy who embraces his sexuality, sings from the heart, has stories that tell you clearly he’s “been there, done that”, revitalizing a genre of music that is so sorely needed.

How refreshing is this.

I can only imagine a couple years from now, when his shows allow for a bigger budget will be like.

Put it this way: it’s gonna be a show of shows, traditional country music be damned. And I for one will be on the front lines and can’t wait for that.