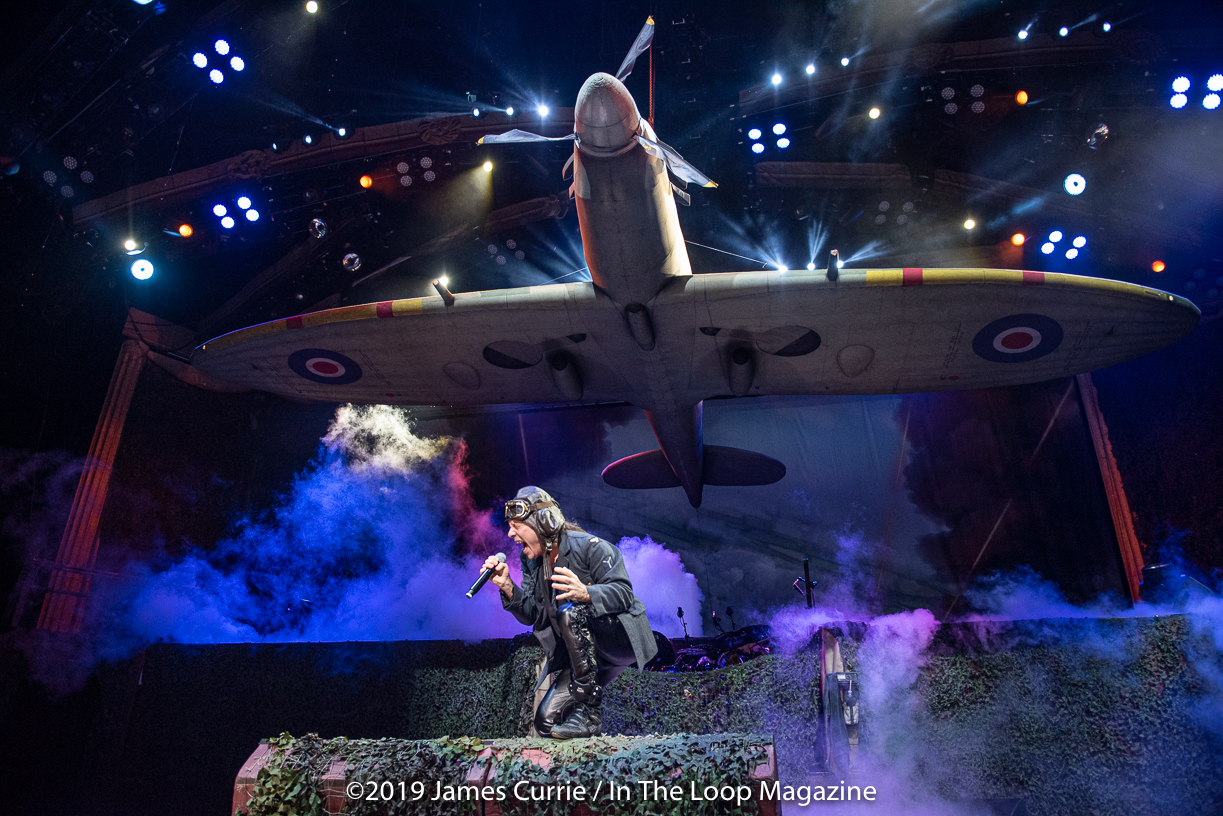 The last time heavy metal giants Iron Maiden rolled through town back in 2017, they brought with them a sprawling concept album in the form of the dense and spectacular Book of Souls. The band was fully behind the album for that entire two year tour, and the set was loaded with epic, lengthy numbers showcasing that record.

This time around, nearing the end of their “Legacy of the Beast” tour (the title of which spawned some unfounded breakup rumors, more on that in a minute), Maiden brought a hit-packed set along with more Eddie, more fire, and more singalongs than any fan could reasonably expect from what will undoubtedly be THE show of the summer concert season in Chicago.

To say that the show was sold out is a given; but Maiden fans bring a special kind of dedication, and the moments before the band took the stage were practically electric as the band exploded onto stage with a Spitfire plane overheard. You heard me: there was a plane onstage, bobbing and weaving as if in combat as the band tore through “Aces High,” “Where Eagles Dare,” and “Two Minutes to Midnight” without so much as a pause.

When they finally broke between songs, Dickinson reflected on the band’s history, noting that there would be no new songs in the set. “But,” he said with a sly smile. “Next time we come back, we’ll probably have something new for you.” (Bassist Steve Harris has also suggested earlier in the summer that the band has a new album ready to go.)

That’s not to say that the setlist wasn’t without its surprise or twists. “For the Greater Good of God” and “The Clansman” were sprawling affairs with guitarists Janick Gers, Adrian Smith, and Dave Murray trading solos with unbridled energy, and Bruce Dickinson sprinted back and forth, his voice sounding stronger than ever, amping up the crowd with his classic refrain of “Scream for me, Chicago!” By the time a ten foot Eddie in full “Trooper” regalia walked onstage to sword fight with Dickinson, the band had already delivered enough energy in five songs to challenge most two hour shows, and they kept the energy going through an appropriately soaring rendition of “Flight of Icarus” (complete with a giant, 3-D Icarus and Dickinson sporting twin flamethrowers), “The Number of the Beast,” and “Iron Maiden,” which saw the biggest demon-headed Eddie in the band’s history rise from the stage to snarl and gnash its teeth at the crowd.

From a standpoint of pure musicianship, Iron Maiden is a well-oiled machine, and the band is now past the forty-year mark: quite the legacy, indeed. As the “Legacy of the Beast” tour reminded all 16,000 of the faithful in Chicago, there’s no better show to be had in the world of hard rock, metal, or just about anything else, for that matter.

For the Greater Good of God

The Evil That Men Do

Hallowed by Thy Name

Run to the Hills