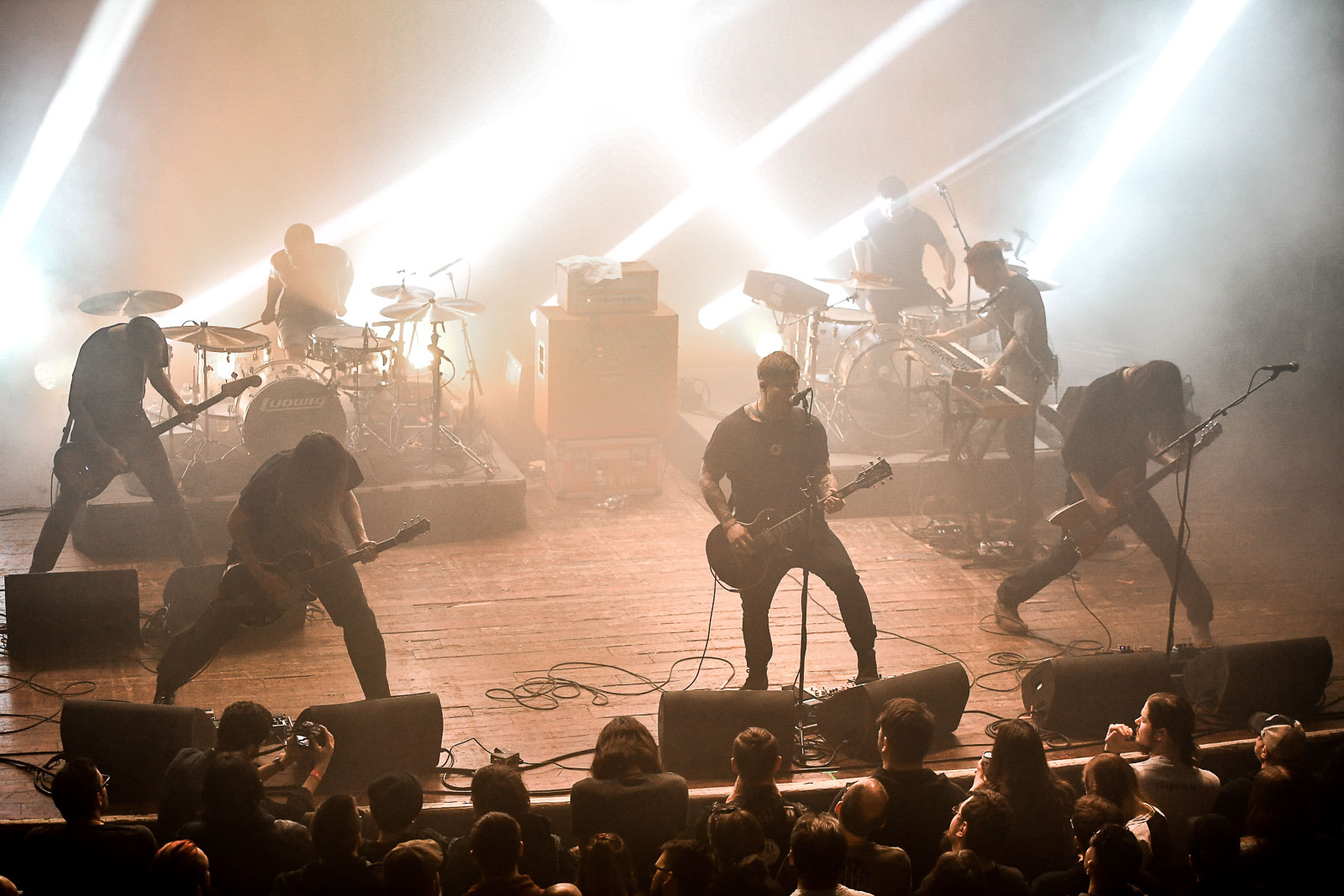 Sweden’s Cult of Luna, with tour support form LA’s Intronaut?
And both bands touring on the strength of their new releases?
And both bands playing at Chicago’s intimate and cozy House of Blues?
With additional support form Emma Ruth Rundle?
Guess what? I’m there dude.
And yes, I’m a photographer first and foremost, with writing kind of taking a backseat.
Get the images just right and proper, then think about the review.
But this bill- definitely a progressive music lover’s dream.
One more quick note before the review of the show: what’s Bobby’s definition of progressive metal?
Intronaut’s set: photo restrictions are the usual- “first three songs- no flash”. After the three song limit- and Intronaut only has one song left in their set.
That should tell you something about songwriting and complex musicianship right there.
It has been an excruciatingly long wait for a new Cult of Luna album, with these Swede stalwarts having released their last record all the way back in 2013 believe it or not, only teasing us in between with some pop up EP’s here and there and live albums.
But it’s new material we want, and lo and behold it’s new material we get in conjunction with this North American tour.
So was it worth the wait for new material to bludgeon ourselves with? Well of course the answer is a resounding “Yes!”
The album is full on brilliant Cult of Luna from start to finish.
Opening their set with “The Silent Man”, off of their latest release “A Dawn to Fear”, a song with layers upon layers of dexterity and might, and a band consisting of not one but two drummers to fill in the void of despair- you know from the first song that you’re in for confoundingly awesome musicianship.
Peppered throughout Cult of Luna’s show would be a total of four new songs, each equal in working wonders in the Cult of Luna canon, and worthy of your attention.
Moods and atmospheres are ever present with their set, with crisp and sharp blinding white strobes flickering about horizontally from one side of the stage to the other, with searing melodies cascading down from the heavens again and again.
Everything in Cult of Luna’s set is expertly crafted, seamlessly created, and done with attention to detail.
From my vantage points throughout their set, audience consisting of mostly men like a true prog show, lots of headbanging, and respectful of fellow concertgoers.
But a pit on the main floor did open up on occasion, depending on the severity of whichever song.
No matter.
There’s beauty lurking in the darkness with Cult of Luna.
Johannes Persson on guitars and vocals, some of them gutteral, some of them natural, all of them most satisfying.
With Magnus Lindberg, and Thomas Hedlund pounding away on complex drums and percussion, Andreas Johansson on bass, Fredrik Kihlberg also on guitars and vocals, and rounding things out with Kristian Karlsson on keyboards and vocals- these guys are formidable, all experts in musicianship and performance.
A breathtaking show from the mighty Cult of Luna.
Openers Emma Ruth Rundle, and Intronaut round out the bill, with the yin and the yang.
The yin? That would be Emma Ruth Rundle, with a simple no bells and whistles kind of set, just her solo with an electric guitar, strong songwriting, an ambient low key mood permeating throughout her brief set.
What makes her set memorable is her kicking us photographers out of the pit after one song, i guess not liking the sound of rattling shutters from cameras going off- her music being the exact opposite of Cult of Luna and Intronaut.
No matter- was able to roam the main floor for a few more photos, taking it all in.
Honestly, Emma’s set was sort of a breather of sorts, from the onslaught of Intronaut prior, and awaiting Cult of Luna after.
As for the mighty Intronaut, who are also touring on the strength of a new release- “Fluid Existential Inversions” (the title of their release alone should tell the average concertgoer what they’re up against)- a set with only four songs, but bludgeoning and complex they all are.
Jesus- for a three piece, they sure bring the hard and heavy without even breaking a sweat.
Sacha Dunable, always formidable on guitar and vocal, Joe Lester on bass, and newcomer Alex Rudinger (from the band Whitechapel and the Faceless) on drums- these guys bring the razzle dazzle, with their brand of progressive metal with lots and lots of heart and soul.
Before you know it- their set is over in a flash, and you scratching your head in a “what the fuck did I witness” kinda moment.
Can we go back to repeat please?
For all three bands for that matter?
This show was fretboard gymnastics throughout.
Have to say we need more of this please.
A show that was more than satisfying.