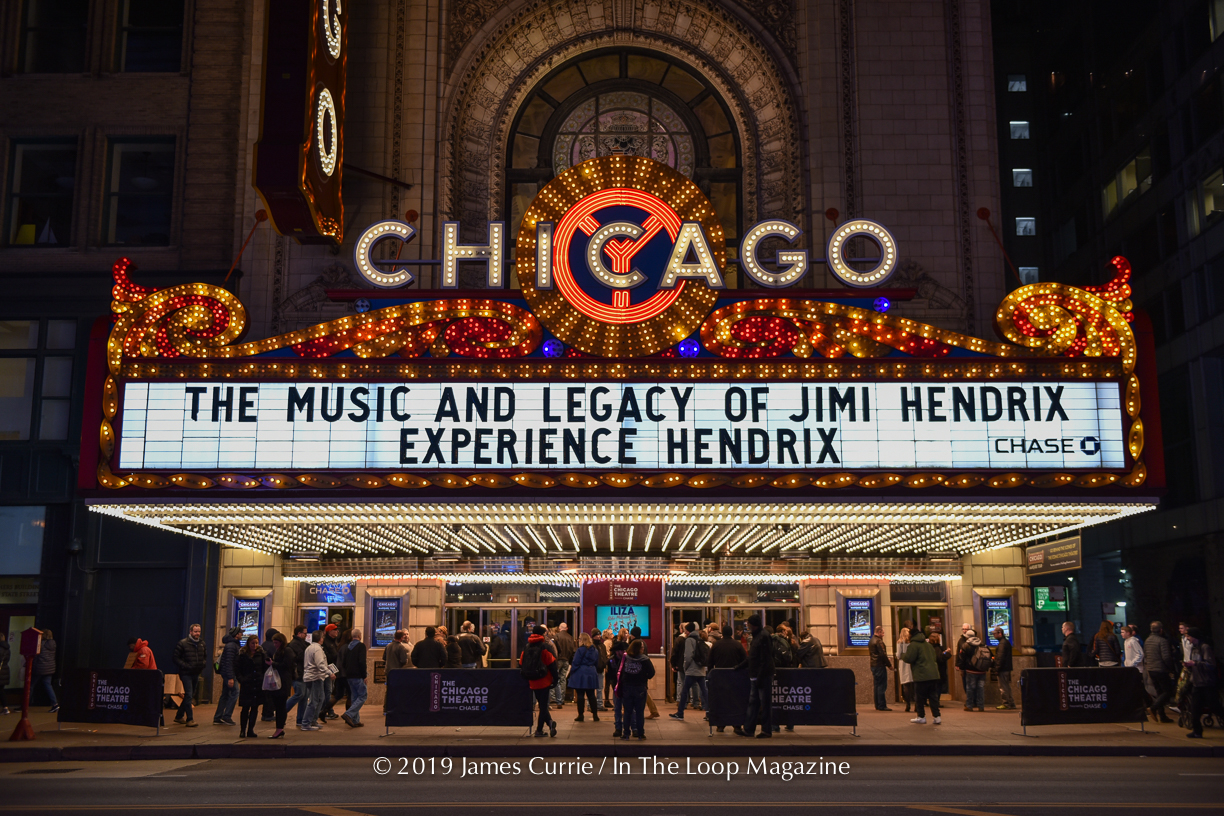 Seeing the Hendrix tribute concert known as Experience Hendrix Tour live is one of the greatest rock concert experiences around. Especially when it’s in Chicago’s most grand and flamboyant theaters, The Chicago Theatre. The setting for this concert matches the grandiose of what Jimi Hendrix himself encompassed. This year, the tour came back with a couple new surprises that made this one of the top shows to catch.

This is a rock n roll circus started back in 1995 and has returned sporadically ever since. It’s filled with musicians from far and wide all paying respect to the man who launched thousands of axe wilders. There’s a reason why Jimi Hendrix was and is still considered one of the top guitarists of all time. This performance proved why as today’s top guitarist collaborate together to relive the magical music that not only defined a generation, but built a talented team who can perform these classic rock tracks right.

Helming this wild ride is the only surviving member of Jimi Hendrix’s bands, Billy Cox. The iconic bass player from Band of Gypsys. Cox is one of Jimi’s friends and Army mates he met at Fort Campbell in the mid 60’s. Cox is continuing to honor his friendship and play these songs to a new generation of fans keeping that Hendrix torch lit.

Also along for the ride this year are some returning regulars as well as new blood. Joe Satriani, Zakk Wylde, Jonny Lang, Dweezil Zappa, Eric Johnson, Doyle Bramhall II, Dug Pinnick, Mato Nanji, Taj Mahal, David Hidalgo, Cesar Rosas and Kevin McCormick all playing guitar to legendary songs from a peace and love bygone era. Helping to hold down the back end are Chris Layton and Kenny Aronoff both legends in their own right. Others helping out include The Slide Brothers Calvin Cooke and Chuck Campbell and Hendrix family friend Henri Brown. Jimi Hendrix’s little sister and Hendrix Experience coordinator even makes an appearance backing vocals and beating a tambourine.

The Experience Hendrix performance is a long and in depth review of his catalog. Tonight was three hours of music from these rockers that never let anyone down. There was no intermission as in past performances. They just kept rolling on through the night without a care playing tracks from Hendrix’s first Jimi Hendrix Experience albums, through his Band of Gypsys work and solo performance cuts. Nearly 30 tracks were played masterfully in the grand ol theatre ranging from “Are You Experienced?” to “Voodoo Child (Slight Return)”.

The night started with Billy Cox, Chris Layton and Dweezil Zappa doing “Freedom”. During each break, a new member was brought out. The highlights from the nights performances came when Zakk Wylde took over the stage like a untamed lion pacing back and forth on the stage playing his iconic guitar looking for an escape. That release happened in the form of rushing the crowd while playing his axe over his head, running up and down the isles of the theater, even making it up to the upper balcony. He stopped along the way playing in the isles to fans and even made his way up to the front of the balcony showing off his guns and talent unmatched by few. His solos ran for 15-20 minutes. It was an incredible show of stamina and showmanship. Jimi Hendrix himself would no doubt be proud.

That’s not to say that the others were slacking in any form. No, everyone has their strong points and proved it time and time again with each change up.

Someone new this year was Dave Mustaine, the main man from Megadeth. He played his flying V guitar, metal shredding style, like no other. He even made comment before he started saying, “Ok, we’re gonna speed things up a little bit here.” Then tore into “Fire”.

The night finished off with “If 6 was 9” and “Voodoo Child”. This was with a three piece that consisted of Joe Satriani, Doug Pinnick and the drummer who’s played with just about everyone, Kenny Aronoff. It was really great to see a three piece perform like Hendrix did with most of his bands. There’s just something about that combo sound that really works.

After the music was over, the musicians all came back on stage. Honor was paid to Billy Cox and the rest of the band by Janie Hendrix followed by a couple bows to the audience and final curtain call.

Not sure how many more of these Experience Hendrix concerts will happen, but if they do, I highly recommend checking it out. Each one is slightly different through performers, special guests and song arrangements. For your sake, let’s hope whenever it is, it includes Zakk Wylde.