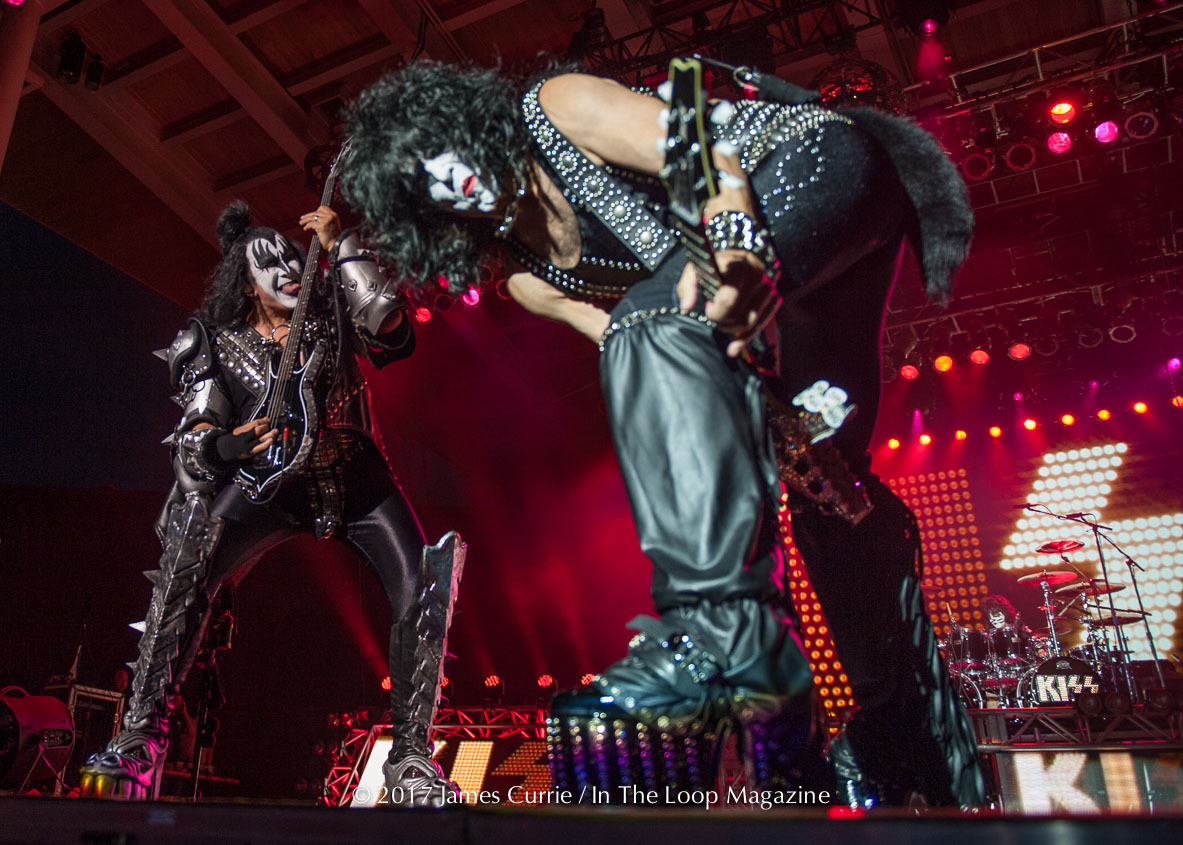 Well it’s not Saturday night, but Paul Stanley and the boys from NYC still feel uptight as they get everyone up to move their feet at RiverEdge Park in the far western suburb of Chicago, Aurora, Illinois last night. Yes, Wayne’s World.

This gig marks the bands second performance in the Chicagoland area in just one month. The first was a few weeks ago at Chicago Open Air Festival at Toyota Park in Bridgeview, Illinois. That didn’t stop the fans from coming out again in full KISS Army force as the place was packed from the front of the stage all along the riverfront back to the parking lots. There were even boats parked along the river’s edge pulled up like a drive in theater watching.

The show was a smaller, less involved production than a normal KISS show, but they still rocked it. They played through a majority of their hits (16 in total) including a deeper cut like “Flaming Youth” and ended with “Detroit Rock City”. They played one of their newer tracks, “Say Yeah” off the 2009 release, “Sonic Boom”, but it wasn’t met with the fervor of the fan favorites like “Black Diamond or “Rock and Roll All Nite”, the majority still fell along with it. The only song that really didn’t seem right was hearing, “Shock Me” done by Tommy Thayer. Tommy is a great musician, but he’s not Ace Frehley. Several of the fans could be over heard mumbling about this not being right, but he pulled it off.

KISS has been a strong supporter of the armed forces for sometime now. Tonight was no different. After the main set, they took a break and went into their tribute to the men and women of the United States military. They brought out vets, the flag and did the national anthem. They also brought out the mayor of Aurora, Richard Irvin. Irvin thanked them and gave away the keys to the city to the fantastic four.

The show went off without a hitch as the weather wasn’t playing well that night in many parts of northern Illinois. A light sprinkle was felt off and on, but unlike a previous show there just a couple weeks earlier, didn’t get cancelled. You could see lightning flashes in the distance, but luckily the storms held off until well after the show was over.

If you’ve seen KISS before, you realized this wasn’t one of their best. That’s not to say anything about their skills, but more on the event over all. The band didn’t call out to the city by name. Paul Stanley’s voice crackled a little more than usual and he didn’t fly out over the crowd, Gene Simmons didn’t raise up into the rafters and the set props weren’t all there, but it was still a strong KISS show. Stanley always appreciates the fans no matter where they are and tonight was no different. They just weren’t mentioned by name. The pyrotechnics were strong. The fire was high and the confetti was blasting like a strong winter snow storm north of “The Wall” (Sorry, Game of Thrones night) in general, it all worked. Especially for the surprisingly newbies to a KISS show as Stanley called out, “Who here hasn’t seen a KISS show before?” Many hands went up and that meant many new KISS Army members were joined to the greatest rock band around.

This was the end of the summer tour for KISS. As a matter of fact, there are only 4 other dates listed on the bands tour site and those are one offs in the South. So we’re pretty lucky to have gotten not one, but two KISS shows.

For photos from the KISS show at RiverEdge Park, click here