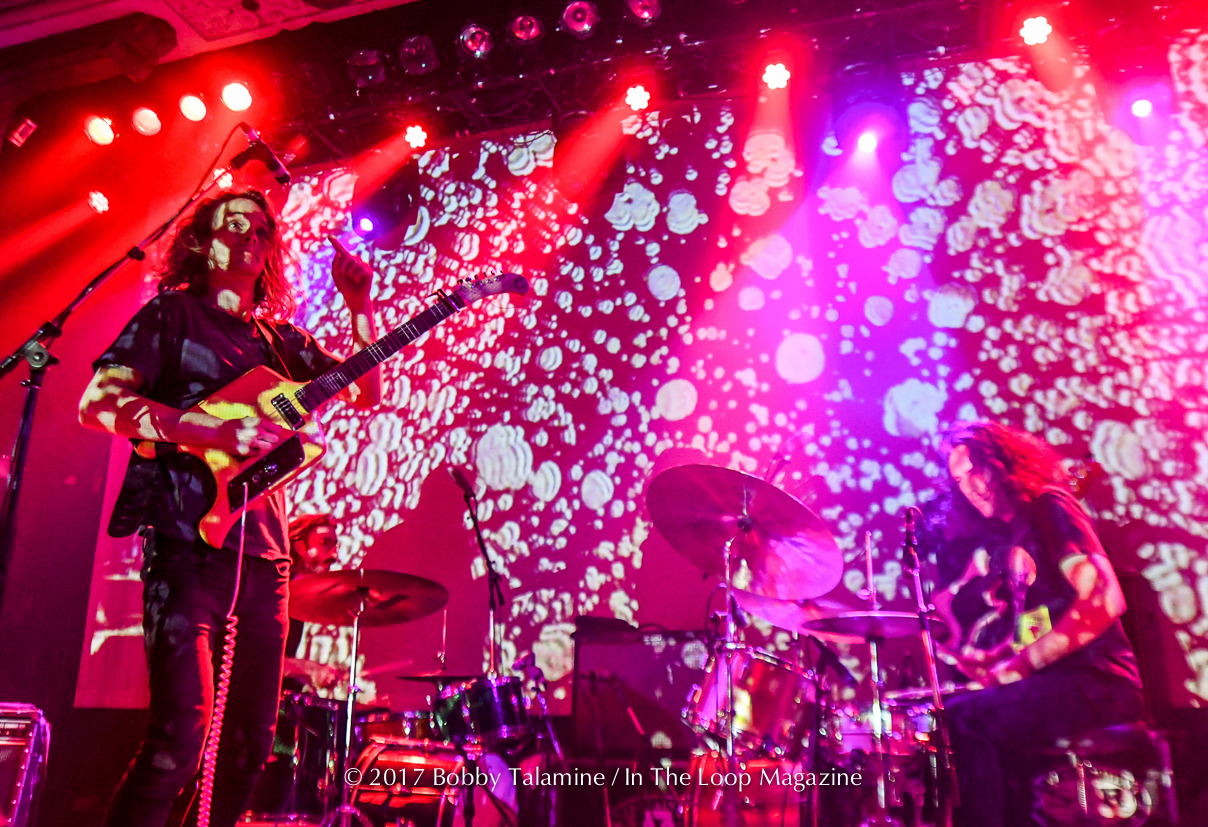 Nothing is half assed with a King Gizzard & The Lizard Wizard show.

Australian psychedelic rock band King Gizzard and The Lizard Wizard are true throwbacks to a different era and time: circa 1967 – ’72. I mean this as a compliment: there’s no other band that I know of currently on the scene that have released eight records in the last four years, and are upping the ante with a proposed five  (count ’em – FIVE) new releases for 2017. Now that’s what I call prolific. And their live show: a splendid mix of over the top visuals with lots and lots of energetic playing, with two drummers firing like twin engines at any given moment.

This is truly  a band that loves to indulge their ambitious nature, and let loose when necessary with a terminal velocity that does not have a brake pedal. Me loves this kind of band.. breaking away from your typical live act that comes off ok, but there could’ve been more. It’s not that you get jaded from seeing so many live shows.

I feel in my heart when leaving some said live shows, walking back to my car with certain songs from the show in my head, and reviewing the melodies, and dreaming of a bigger sound, bigger production. That tells me the coulda shoulda would as. Absolutely not the case with a Gizzard set: seven musicians adding this and that to the sound, refining their improvisational output as they go merrily along.

Case in point: the song “Rattlensnake”. Stu Mackenzie, frontman of Gizzard: when he sings “Rattle – Rattle – Rattle…..Rattlesnake”, repeatedly getting louder and louder with every verse..damn if it doesn’t get the hairs on your neck to stand on end. This is a guy who’s a master of anxiety and thrill ride in each song.

You wish more band would indulge their ambitious nature, and mess around with off beat tunage and lyrics. Make no mistake: this band knows how to rev up a crowd, and keep them transfixed ’till the bitter end. Lost count how many body surfers were doing their thing. King Gizzard: a band that rules. From beginning to end.

For more on King Gizzard and the Lizard Wizard, click here

King Gizzard & The Lizard Wizard @ Metro Besnard Lakes Plan Return Gigs To The U.S. With A Stop In Chicago In May