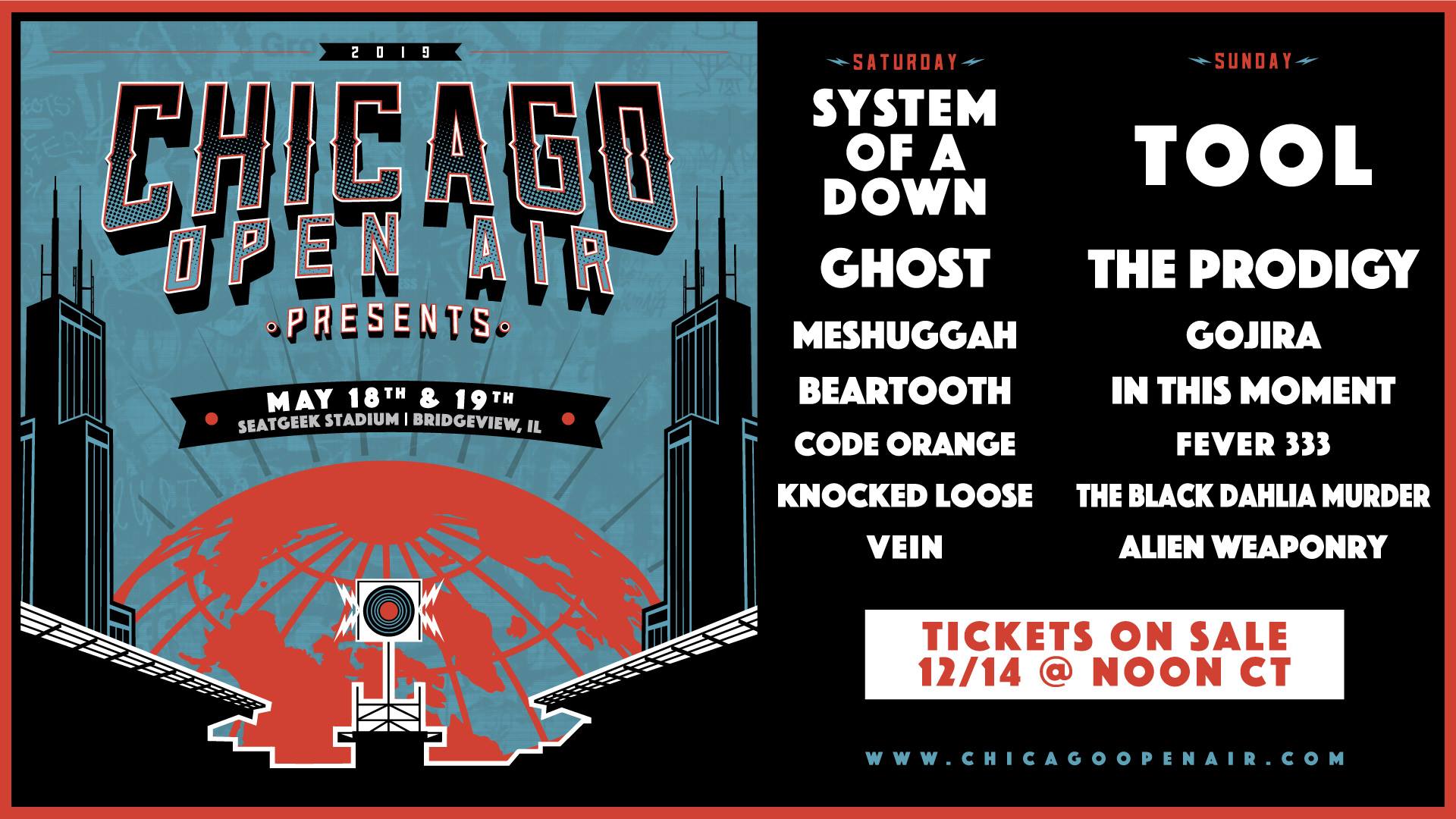 This spring brings another must-see event from premier independent U.S. music festival producer Danny Wimmer Presents. On Saturday, May 18 and Sunday, May 19, Chicago Open Air Presents a massive stadium show with headlining sets from chart-topping acts including System Of A Down, Tool, The Prodigy and Ghost, plus more appearances from today’s biggest hard rock and metal artists.

The event is co-produced by Live Nation and will take place at SeatGeek Stadium (formerly Toyota Park) in Bridgeview, IL, just outside Chicago.

Maria Brink, frontwoman of In This Moment, says, “I can’t even begin to express how excited we are to be playing Chicago Open AirPresents. We had such a blast last time! Tool, The Prodigy and System Of A Down, that’s insane and such a powerful lineup. We feel blessed to be a part of it all. These are some of our all time favorite bands, I can’t wait to see you all there with In This Moment.”

The daily band lineup (subject to change) is as follows:

Sunday, May 19: Tool, The Prodigy, Gojira, In This Moment, Fever 333, The Black Dahlia Murder, Alien Weaponry

Doors open at 2:00 PM each day. In addition to enjoying two days of nonstop rock, attendees of Chicago Open Air Presents will be able to indulge in an array of food and beverage options. A variety of local and regional craft beers and delicious Chicago-centric cuisine will be available throughout the venue over the course of the weekend.

Chicago Open Air Presents sponsors include Revolution Brewing. Revolution Brewing is the largest independently owned brewery in Illinois, brewing every drop in Chicago between the original brewpub space in Logan Square and a production brewery and taproom in Avondale. In 2017, Revolution became the 40th largest craft brewery and 50th largest overall brewery in the country by sales volume, according to the Brewers Association. Revolution currently distributes in Illinois, Indiana, Ohio, Massachusetts, Michigan, New Jersey, New York City, and Wisconsin.

Chicago Open Air Presents is produced by Los Angeles-based Danny Wimmer Presents, one of the largest independent producers of destination rock music festivals in America, and Live Nation. DWP events include Aftershock Festival, Bourbon & Beyond, Chicago Open Air, Epicenter Festival, Hometown Rising, Louder Than Life, Sonic Temple Art + Music Festival, and Welcome To Rockville. They’re also the co-creators of Rock On The Range, America’s largest and most acclaimed rock festival, which celebrated its 12th and final year in 2018 with 140,000 in attendance; Carolina Rebellion, which wrapped in 2018 after 8 record-breaking years, including over 100,000 in attendance multiple years at the annual event; and Northern Invasion, which had 50,000 in attendance for its fourth year in 2018.