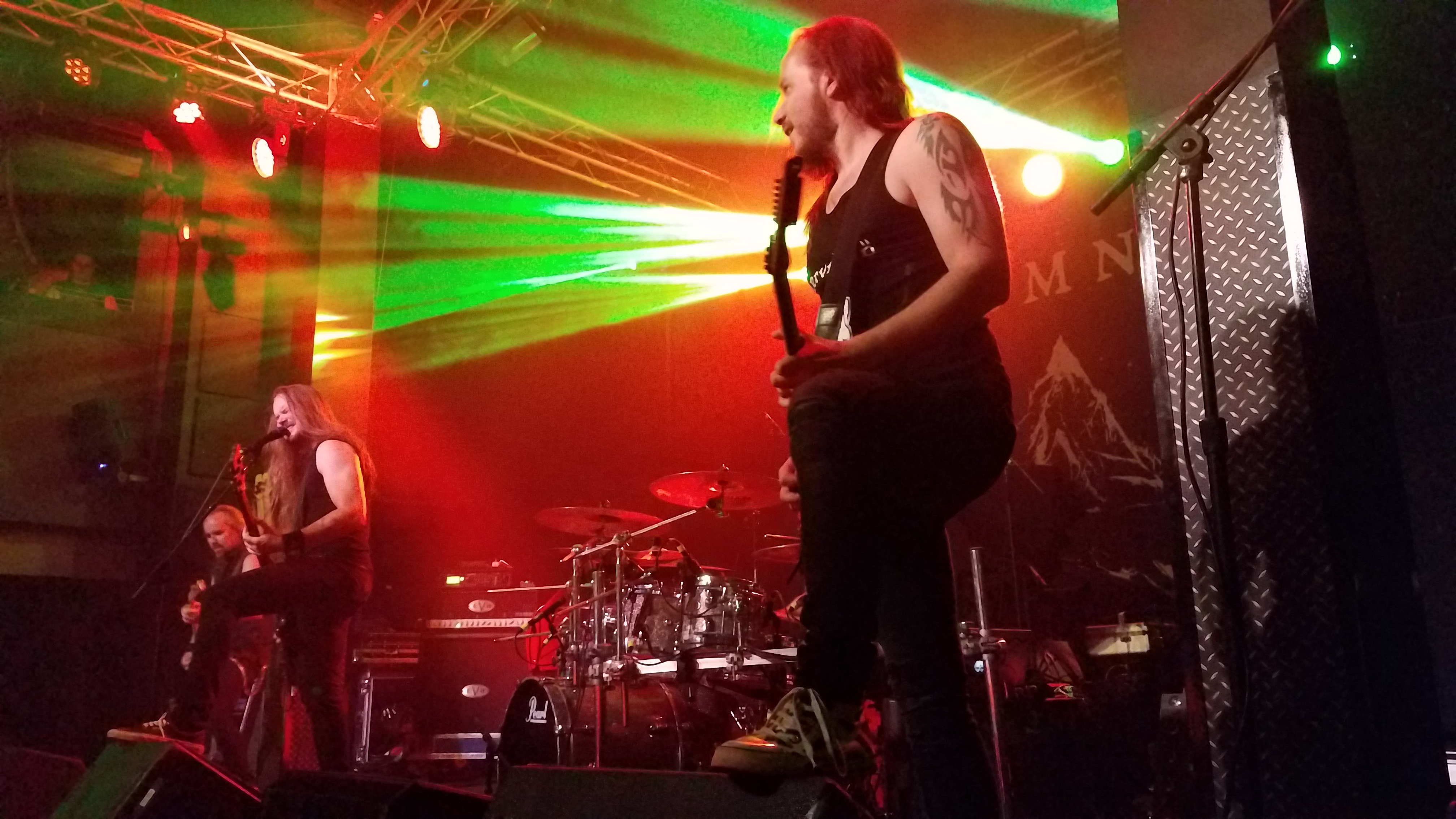 Joliet recently received some international attention with the appearance of metal acts, Insomnium, Lacuna Coil and Epica at The Forge (Formerly Mojoe’s / The Tree). Metal hailing from Finland, Italy and The Netherlands, the night was met with fierce energy both from the bands and the fans as the nearly sold out event took place this past week. Though the venue endured slight difficulties with their sound, the night was still a memorable one nonetheless.

Returning to the states after many years, Finns, Insomnium, were touring in support of their latest epic and unique album, Winter’s Gate. The concept album, spans exactly 40 minutes, a feat not many bands take on, meanwhile the entirety of those 40 minutes is one long extensive song, no breaks or silence. The unexpected long setlist was rather pleasing with the band opening the floodgates to hell with The Primeval Dark. Fans immediately recognized the more well known hit and flocked towards the front. Off of the album, Shadows of the Dying Sun, While We Sleep proceeded before heading into the big one. The group went on and played the first three parts to Winter’s Gate which was rather epic as the lighting mixed with fog and headbanging created an enticing atmosphere. Before heading onto the final tracks of the evening, lead man/growler/guitarist Niilo Sevanen greeted the crowd and thanked everyone for being there. As the night was far from being over, it wasn’t long before the group went on to play Mortal Share, Change of Heart, the final part to Winter’s Gate, Part 4 and closing out their setlist was one of their earlier hits, The Promethean Song.

With Lacuna Coil experiencing some turbulence over the recent years as half the band left leaving the future of the band in question, it was great to see them back at it again touring with a fresh new lineup, especially after being around for just about 20 years. As lead woman Cristina Scabbia, mentioned, “Next year marks 20 years of Lacuna Coil and nothing stands in our way!”, which made reference to a song they played later that night. But before all that ensued, the band graced the stage in their psychotic ward costumes fresh with corpse paint, blood and tattered straightjackets. On tour in support of their latest album, Delirium, a rather spooky and eerie intro kicked off the night before launching their metal assault with Spellbound. The majority of the setlist came from their newest album, with the remainder of the setlist taking a well-rounded form as the other half of the tracks took the fans through Lacuna Coil history.

Blood, Tears, Dust, My Demons and Ghost In The Mist all came from the new album which followed throwbacks like Trip the Darkness and Our Truth. The band sounded like they were wrapping things up as they played the title track from their latest chapter and afterwards having a sort of ‘celebration’ as 2018 marks two decades that band has been in existence. Lead woman Cristina Scabbia, mentioned that they’ve been hard at work as they are set to be releasing a new book soon which the book is appropriately titled, Nothing Stands In Our Way. The band encouraged the fans to start chanting along those exact words as the next track of the same name started and closed their night off with the first single from the latest album titled, The House of Shame.

Though it did take a little longer than expected, the headliners of the night, Epica took on the reigns for the night and entered the stage but not before a sinister and chilly entrance. This was their second US tour in one year which was a pleasant surprise for fans this time around. Eidola set the atmosphere before their catchy track, Edge of the Blade kicked things off on a high level. With the band recently releasing their EP and their previous full-length album, The Holographic Principle, the majority of the tracks were also from that album. One of their most successful hits came next known as Storm the Sorrow meanwhile Wheel of Destiny off their EP proceeded and The Essence of Silence continued the path of epic proportions. Their more dystopian themed track, Universal Death Squad came next as well as having the crowd reach a state of ascension with the track, Ascension – Dream State Armageddon.

The band took a little breather before playing the next track and described it. Known as Reverence – Living in the Heart, the track is about finding your true self if you take the time especially in this fast paced advanced world we live in. Keeping the theme relevant, Unchain Utopia came about as the track warns the listener to beware those who try to take advantage of society and how we are in an era where enterprises fall. The last track of the night would be one that many fans know that basically calls out religion and the scandals that have been going on over many years with the track, Cry For The Moon. The band hit backstage for a minute or so the fans thought as keyboardist Coen Janssen came out in his keyboard attire and started playing the main chorus of Queen’s, We Will Rock You.

An encore was in order which initiated with their hit, Sancta Terra which in latin translates to ‘Holy Land’. Keyboardist Coen and guitarist Isaac Delahaye would come down from the stage and play with the fans in the crowds creating an even more exciting show for those who got to experience their presence. Beyond The Matrix crept up quickly and it wasn’t long before the actual final track of the night Consign To Oblivion would put fans in a state of awe as a wall of death came about before the song started and once the track begun, the fans clashed and things reached their climax aptly towards the end of the show. Overall, Epica continue to create stimulating atmospheres with their shows. With themes that pretty much affect everyone on this planet, that only creates even stronger shows. Not only Epica but every act on the bill really gave it their all and it’s rare when international acts come together for a night of headbanging, moshing and good metal times. If you ever want to experience an epic night of metal, be sure to keep an eye out as Chicago will be anticipating their return.