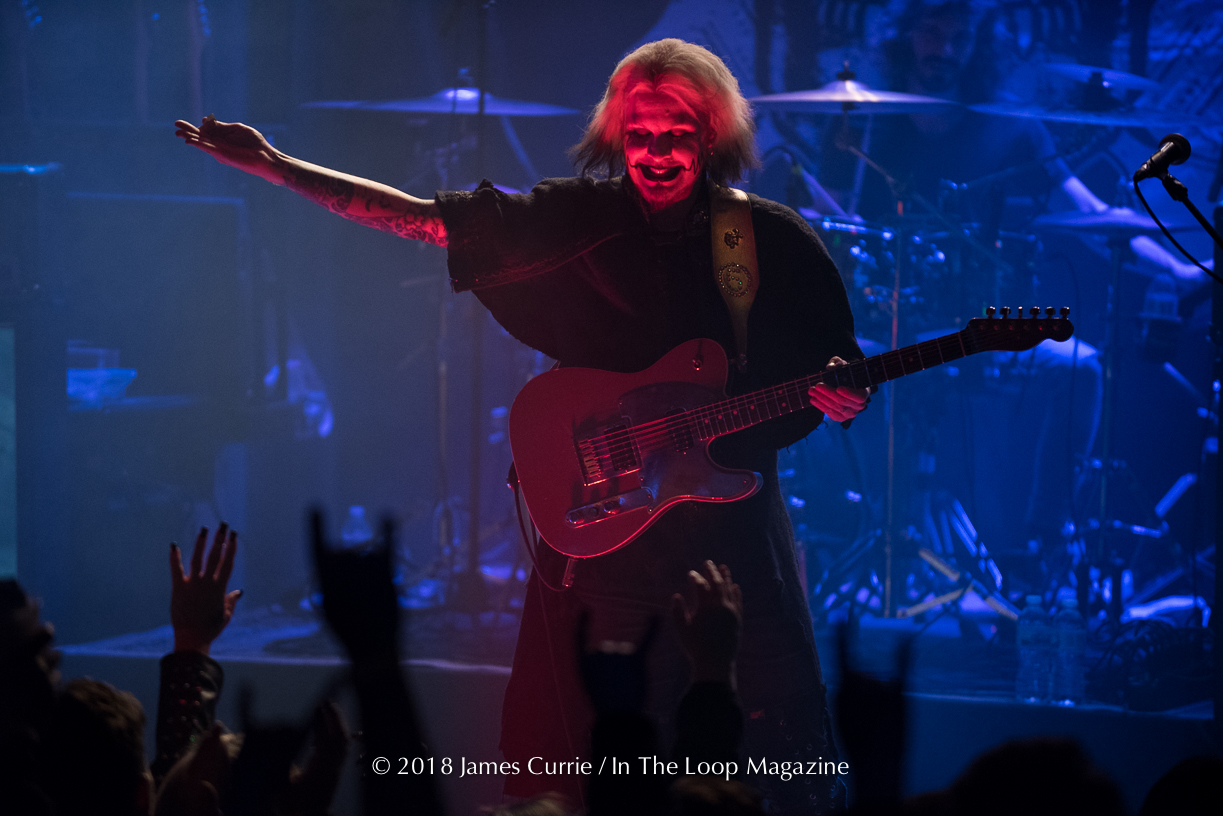 In The Loop Magazine’s Christopher David recently had a chat with guitar legend in the making, John 5. John 5 has been around for some time now playing with iconic industrial metal bands like Marilyn Manson and Rob Zombie, but he’s been building his own fan base strong for many years as well with his own solo work.

John 5 and The Creatures played at Reggies Rock Club in Chicago to a completely packed house filled with fans from all his works. This is his third time around with the Creatures and each time has grown larger and larger. So much so that if he does this again next year, might need to look into a larger venue.

In The Loop Magazine (Christopher David): So, how’s the “It’s Alive” tour been so far?

J5: The tour’s been going so well, I can’t believe it. The crowds have been huge, and it always surprises me, because at the end of the day, you know, it’s instrumental music. But we tried to create this kind of show that goes with it, so that every minute, there’s something going on. People are really gravitating to it, and I’m so thankful for that. I don’t do it for anything other than the love of the guitar. And I think people can see that, at the shows, that I just do this for the love of music and the love of guitar.

CD: When we’ve covered you in the past, we do get that response from people who might not be as familiar with your solo material – that it’s this amazing show, with all the monster imagery and such. But you’re right that you don’t see as much instrumental live music out there, and that’s interesting that you thought the interest wouldn’t be as high because of that.

J5: Yes, and that’s the reason I never toured it. I just didn’t think people would really care; there aren’t a lot of instrumentalists out there, because it is a hard sell, and I understood that going into it. But I think when something is honest and true, and for the love of the instrument, people know it’s real. And I’m very happy about that.

CD: Live albums seem are one of those things that are very deliberate – it’s not something that artists just throw out there randomly, for the most part. What was it about this point in your career that made you decide it was time for a live record?

J5: You know, with a live record, it’s very planned out, very calculated. You have to record all the shows, pick the best performances, all that. There’s so much that goes into it. They’re usually end-of-the-year release or something like that. But how this came about, we just kinda captured the magic. I kept everything from that show in there, and I couldn’t be more proud of a record than that one.

CD: It’s a phenomenal record, and I think it made a lot of sense to document that tour. I think a lot of people don’t always realize just how much work is involved in putting together a live record.

J5: Yeah, I’ve recorded many other larger scale live records, where you have to record every show, and you have to have a crew and engineers for it, crowd mics and amp mics that have to be just right, the wind can’t be blowing if you’re playing outside, that sort of thing. There’s so much that goes into it, and it’s quite a task.

CD: When you’re writing solo material vs. say, writing with Rob Zombie, what informs that process for you? Do you have this collection of ideas that you carry around and apply as needed? Can you talk a bit about how those two processes are similar or different?

J5: Writing with Rob, we’ll just get together to work on stuff and see what he thinks. It was a great process on this last record, because he kinda started with the melody and the lyrics to drum beats or simple guitar parts, and then I came in and we worked out the arrangements, and it was such a great way of doing it. This upcoming record is by far his best record, in my eyes, and I rarely say that about anything, but this is definitely his best.

CD: Is that coming out this year?

J5: I have no idea, but I’m more excited than anyone!

CD: Are you planning a big tour with Rob this year, after your solo tour?

J5: Yeah, some shows have been announced already, but there’s gonna be a big announcement soon. We’ll be out a lot this year.

CD: It’d be great to see you guys back at Chicago Open Air Fest this year. Last year’s set was an absolute blast.

J5: Speaking of Chicago, we did record the Riot Fest show, because we did the whole Astro-Creep record there. Talk about recording live, oh, my god. There wasn’t a single overdub, Rob just mixed it. He was like, hey, you gotta play this stuff perfectly. You have to be so on your game with him, there’s no room for error at all. I love those challenges.

CD: That is something I’ve noticed about seeing you with Rob, and the band in general – it’s one of those rare cases where it doesn’t feel like a choreographed show, but you guys are so aligned with each other. I never feel like I’m just seeing the same show over and over again. Which I think is it’s own skill.

J5: We definitely have a lot of fun and the crowd really enjoys seeing that. I remember seeing bands as a kid and seeing them have a good time, and that made me feel good. And that’s how it really is, we all get along so well.

CD: So, I know you’re a huge KISS fan, as I am, and I have to ask about your new Instagram account (@knightsinsatanservice), where you’re sharing pictures of rare KISS memorabilia from your personal collection every single day. It’s so cool to see!

J5: It’s funny, because I’ve been planning this for a while. So I thought, January 1st, I’m gonna start, and I’m gonna post every single day. It might have to spill over to 2019 because I have so much stuff. It’s all merchandise from 1973 to 1982 that people don’t really know even exists, and I just think, how interesting is that? I always look at things from the standpoint of what I wished was out there, so I thought I might as well do it!

CD: You have a massive KISS collection. While I’m not a collector per se, I’ve been a fan for many decades, and you have some truly rare stuff. The Australian tour shirts and the Dynasty stuff blew my mind.

CD: Do you have a favorite individual piece of KISS memorabilia?

J5: Yes! It’s a KISS ruler, a school ruler, which was a promotional piece from Casablanca Records that coincided with the release of Love Gun (1977). It’s really hard to find.

For more on John 5 / John 5 and the Creatures, click here

For photos from the John 5 show at Reggies in Chicago, click here