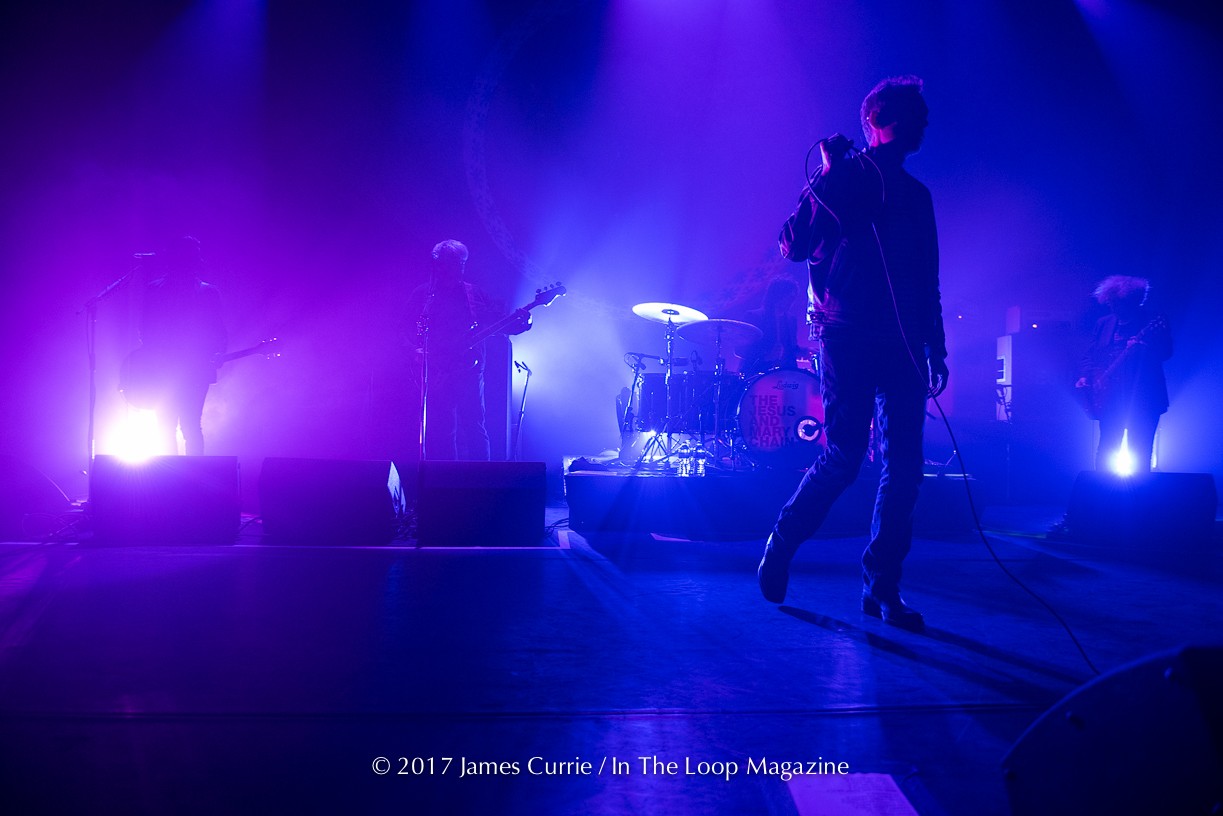 On a miserable rainy day, the legendary rock band The Jesus and Mary Chain took the stage at the Vic in what was, perhaps, one of the best live shows in recent memory. Touring in support of their new release, Damage and Joy, the famed Scottish outfit covered material from the album along with well-known songs from their past. Credited with bringing about the shoegaze movement in the late eighties and early nineties, The Jesus and Mary Chain quickly cemented their reputation with incendiary live performances, a ruthless swagger, and of course, their heavy, dark sound in the vein of the Velvet Underground. Combining torrential guitar riffs and sinister lyrics, their searing music gratifyingly pushed the limits of decency and taste. With Damage being their latest album after an almost twenty year hiatus, their appearance at the Vic was a music lover’s dream and strangely, paralleled Slowdive’s recent show only a week before with both bands returning after a long absence. However, while their performance was noteworthy for its elegance and grace, the Mary Chain otherwise roared and thundered in an electrifying show that was alt-rock history made manifest.

Before The Jesus and Mary Chain took the stage, The Cobbs, a rock outfit from Philadelphia opened the show with their mix of psychedelic blues rock from their album, Sing the Deathcapades. While the band members were all talented musicians, the opening of their set was underwhelming as the music sounded rather dull and conventional. As the band continued however, the sound came into its own with a heavier, more blues-oreinted rock sound. The best song from their set was “Say You Never Knew Me” with its heavy, volcanic melody and the lead guitarist’s blistering guitar skills. The Cobbs ended their set well and brought all the weight of their music to bear on a thunderous finish. To quote Dylan Thomas, they did not go gently into that good night, and the show was made the better for it.

After The Cobbs, William and Jim Reid, the major force behind The Jesus and Mary Chain, strode onstage amid a swirl of thick fog drenched in red light. Accompanied by their fellow bandmates, Jim walked to the front of the stage while Will and the other musicians took up positions at the rear. Within seconds, they opened the show with the song “Amputation” off of Damage and Joy, a solid anthem that unfortunately proved to be a rather soft opener compared to the bedlam later on. The Mary Chain covered almost the entire breadth of their discography, playing tracks like “Just Like Honey” and “You Trip Me Up” from their most popular album Psychocandy, and others from Darklands, Honey’s Dead, Automatic, and Munki. Altogether, it was a behemoth of a set comprising over twenty songs and punctuated by two encores! Buoyed by Jim’s morose voice and Will’s furious guitar, the entire set was a triumph from the beginning to its volcanic end. Of the many memorable songs from the night, the song “Reverence” took on a shade of hypnotic menace as the band roared in a deafening crescendo while Jim Reid snarled “I wanna die like Jesus Christ! I wanna die like JFK!” It was terrifying and brilliant. From that point, the band brought their set to a vicious climax with the truly epic “I Hate Rock’n’Roll”, a rollicking finish to a set that sadly ended too soon.

Although The Jesus and Mary Chain overall was fantastic, there were still some issues hampering the experience. The backlights positioned behind the band shone with such utter contempt, they turned the band into a bunch of shadows that ruined a number of Instagram posts and failed to convey whatever “cool” impression the band aimed to evoke. In addition, the Jesus and Mary Chain did not seem particularly attached to the audience and played with a somewhat workmanlike approach, as in ,”We’ve come to play and that’s it”. There was no banter or joking with the audience, nor was there any sense of camaraderie between the band members. Further, with the musicians hemmed in by a row of speakers at the back and Jim Reid alone having the entire run of the stage, it was no accident when, at one point, the band and singer launched into different songs at the same time. Had the band situated itself towards the front of the stage, such a blunder could have been avoided. Despite the issues, the band turned in a performance for the ages.

As far as old bands go, The Jesus and Mary Chain are fantastic. To listen to the sound upon which they built their legend and infamy is something every music fan should experience.

For more on The Jesus and Mary Chain, click here