Jean-Michel Jarre at the Auditorium Theatre: A Tsunami of Sound, Lighting and Visual Effects 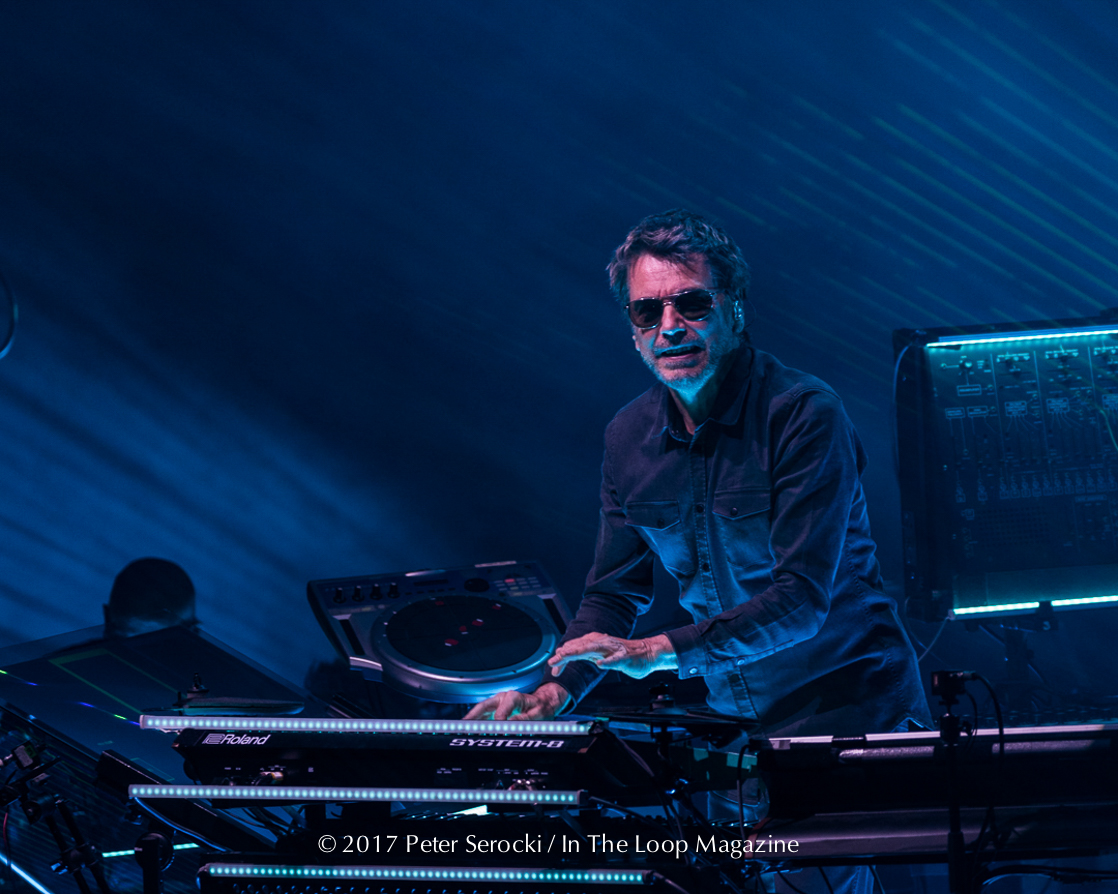 Jean- Michel Jarre brought his “Electronica Tour” of North America, to the intimate Auditorium Theatre in Chicago on Monday night. Billed as his “First Ever Tour of North America”, Jarre’s show is dazzling in scope: an immersive and radical production of striking visuals, with music to match.

For his current tour, Jarre promises “Total Immersion” in a 3-D stage production with colossal and movable vertical LED panels to the front of the stage, and a gigantic horizontal LED screen to the rear of the stage, producing jarring and striking visual imagery that looked in depth and in movable form from left to right, front to back. To say this is not easy. To experience this live is a whole other story. You have to see it to believe it, as much as it can get you dizzy at times.

The show went off rollicking from the start, with the elaborate and complex song “Heart of the Noise Part 1”, the front LED screens parting to reveal Jarre on a riser, surrounded by a bevy of electronic pianos and samplers, some controllers and DJ gear, and of course, the pioneering Moog Synthesizer from the 70’s to his immediate left. Jarre at the center of the bridge, flanked by two powerhouse musicians, providing live digital drums and percussion to accompany the propulsive beats.

Jean- Michel Jarre introduces a “Spy Cam” to the mix, a Go Pro like contraption attached to his glasses, which provides a live glimpse of Jarre’s rig while performing live, so you can see clearly how much he is multi- tasking and playing keyboards and adding samples.

Talk about dazzling in scope: an overwhelming and immersive show from beginning to end, with the Auditorium Theatre offering up an exquisite acoustic space to showcase Jarre’s otherworldly  sonic soundscapes, but still intimate enough to feel like you were in the production. The sonic blasts went from seat shaking thundering bass to the quietest of whispering strings and whispers, and back to full on propulsive beats with perfect accuracy.

Jean- Michel Jarre made it known early on how he felt about that day’s terrorist attack in Manchester, saying “Terrorists hate God as much as God hates terrorists. Manchester we pray for you. Our hearts go out to them. Let’s continue to make music, go to concerts, and create art as a way of resistance”, to thundering applause.

The other political moment came during the song “Exit”, which is Jarre’s collaboration with Edward Snowden, a song swirling around Snowden’s revelations of the United States government surveillance programs, which live, mixes clips of Snowden warning of the dangers of privacy interference, with Jarre’s haunting and disheveled synths adding to the uncomfortableness of the score. The song came off as a Matrix via Wikileaks footage mashup, with the vibe of patriotic whistleblowers in a techno world blended into visual overload, with no apparent solution or answers to persistent problems. Again, the crowd applauded enthusiastically throughout the song.

Jean- Michel Jarre has a French innocence about him, coming off his riser occasionally to play a portable strap on keyboard, or simply pacing the stage to greet his many fans and praise the city of Chicago. Towards the end of the show, during the song “Time Machine”, Jarre came to the front of the stage to play a “Vertical Laser Harp”, an instrument he says “does not always work correctly”. Well it worked fine and dandy last night, with vertical green beams of light, each emitting a different note when he touches them with his special protective gloves.

Overall, you can’t help but warm up to Jarre. To be playing over the top pioneering and groundbreaking ambient electronica, and with such gusto is audacious and infectious.