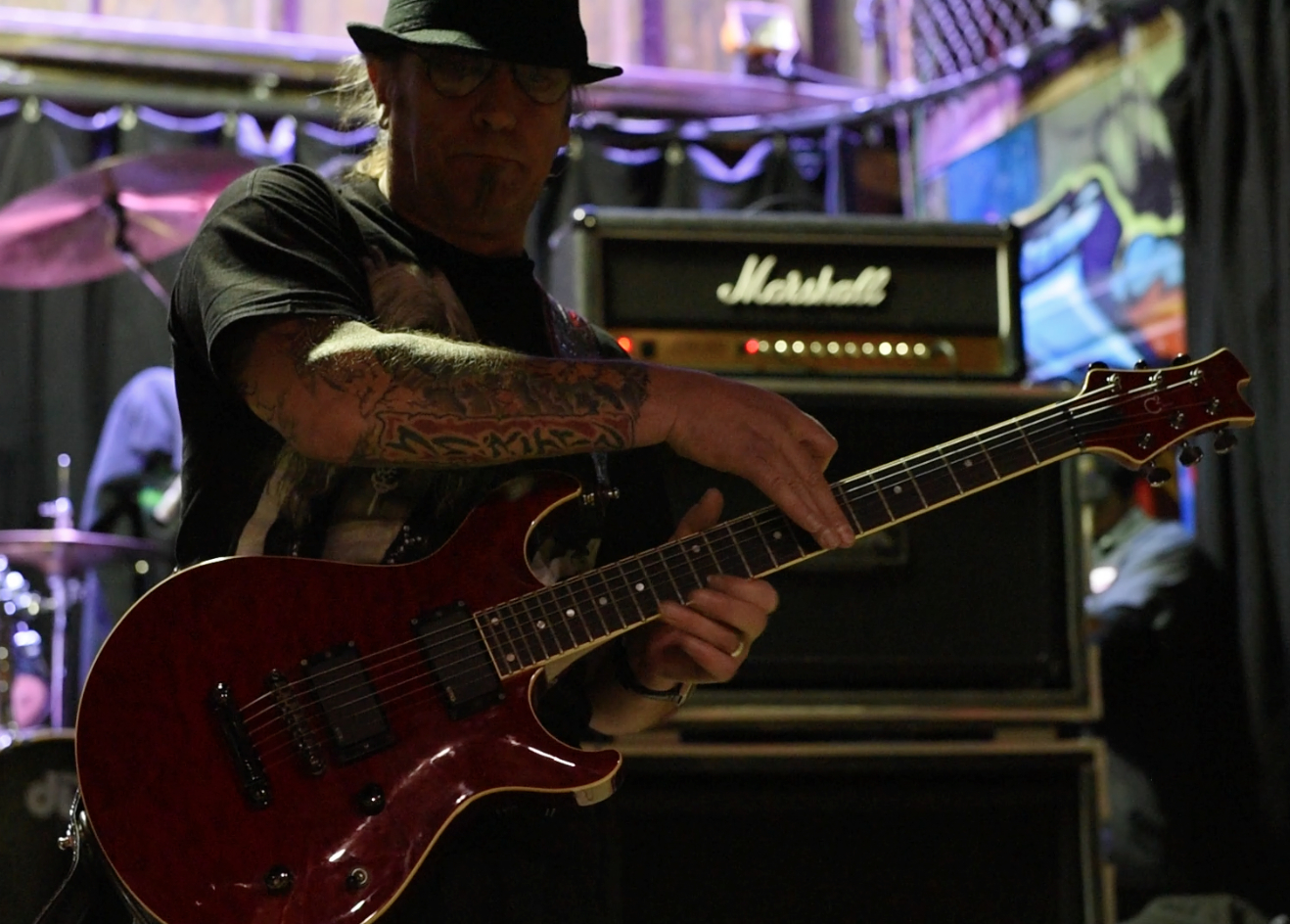 Chris (ITL): So, for the benefit of our readers, tell us a little about what led to Venom, Inc. and this tour.

Mantas: Basically, we got a call from Oliver Weinsheimer (of the Keep It True Festival), and he wanted to book M-Pire of Evil (Mantas and Dolan’s other band). He was at a show in Newcastle, England, where Tony (Dolan) was playing with Atomkraft. Tony had asked me to get up and do a few songs with Atomkraft, so I did that, and another band called Cauldron asked me to get up and do “Die Hard,” so I did that.

So, then, Tony called me and said, ‘hey, we have this offer from Oliver for the Keep It True Festival for M-Pire of Evil,’ and I said, ‘cool, let’s do it,’ and then he said, ‘well, he wants to do something else, too, he wants to bring Abaddon onstage and do some Venom songs,’ and I said I didn’t know about that. I was very dubious, and the initial reaction from me was no. But, we talked, and finally I said, ‘okay, I’ll do it,’ and I just laid down some ground rules – you know, we don’t have time to rehearse, I live in Portugal, you live in England. We have to just show up knowing our shit and DO it. That’s exactly what we did, and the reaction was off the map. Literally, by the time we got off stage, Tony’s iPhone was just going off, and we were getting offers from South America, China, Japan, all kinds of stuff. And our agent was like, ‘what the fuckin’ hell did you guys do!?’

So we spoke, and said, ‘look, does this thing have legs, is it a viable project, can we do it?’ And we decided to go for it. One factor was that…other band that’s out there (note: Cronos’ version of Venom is also currently playing live in support of a new record. –Chris). And Cronos has been out there running his mouth and insulting us, so we just agreed that, you know, in interviews, we’d just tell the truth. I’m not going to engage in all that petty name-calling and whatnot, I’m not going to do that.

And so far, the tour has been absolutely incredible, and it’s been getting even better as we go along. God knows how it’s going to end! *laughs*

Chris (ITL): And I know you guys have already been talking about a new record?

Mantas: Oh, yeah! There’s a few tunes at the demo stage, some at the writing stage, hundreds of bits and riffs on my hard drive. Everywhere I’ve been going, I’ve just been in the hotel rooms, playing guitar, my phone has tons of riffs on it. You know what it’s like – it’s finding the time, as we just turned into a touring band, all of a sudden.

Chris (ITL): Well, and I assume you’re going to tour behind the new M-Pire of Evil album as well, right?

Mantas: Unleashed is done, yeah, just a few bits of bass and vocals, and it’s done. So we want to get that out, and we’re just doing everything we can. We’re getting calls from everywhere for Venom Inc., and we’re just saying yes to all of them! Reactions have been so phenomenal so far that we just want to keep it going.

Chris (ITL): I have to admit that, as a fan, I was stupefied when I saw this was happening. *laughs* So, to switch gears back to the early days a bit: in John Tucker’s newest book, Neat & Tidy: The Story of Neat Records, as well as the article in the November issue of Iron Fist, there’s a lot of focus on the early Newcastle scene and how some of those bands got started. What was the moment at which you personally looked at what you guys were doing and said, ‘this is it, this is Venom the way we want the world to see us’?

Mantas: I’d say Welcome to Hell and Black Metal, together, or maybe even the first single. But I’ll tell you, I don’t know what I did differently with those songs. In Decibel Magazine, Black Metal and Welcome to Hell have been inducted into their top influential metal albums of all-time and that, and one of their writers asked me how we came up with that sound…you know?

When I first met Cronos, one of the things that made me sit up and take notice, apart from him saying he played guitar, was that he worked at a studio (Impulse). Me and the guitarist (Dave Rutherford), who had already formed Venom, had been down to Impulse Studios, and we just couldn’t afford it. Well, the British government at the time had a program called the Youth Opportunity Scheme, and it was basically just a thing to get the young people off of unemployment and into some kind of work, and they would subsidize the company. So that’s what Cronos was doing, he was basically making teas and coffees while he was learning how to splice tapes and stuff like that.

None of us had any idea about recording techniques, compression, EQ, none of it. So we just went in, and in true Spinal Tap form, turned everything up to 11 and just went for it! As far as the songs, one thing I’ll credit to my learning the basics was a book called (I think) Improvising Rock Guitar, and from that book, I learned how to hold the power chord and the pentatonic scale, all of that.

Chris (ITL): And what’s funny about that is that story is that, when I started playing guitar, I actually learned that stuff from teaching myself Venom songs and watching your live videos.

Mantas: Oh! Yeah? *laughs* Yeah, that was all I had when I wrote those songs. And if you’re one of those people who wants to analyze the songs, it’s all blues and rock n’ roll riffs, a song like “Black Metal.”

Chris (ITL): It’s classic. The verses in “Schizo” (from Welcome to Hell) are a traditional blues progression.

Mantas: The transitions from verse to bridge, yeah, all blues transitions. Even “Countess Bathory,” that middle section, that’s “The Ripper” (Judas Priest), that’s my little homage.

Mantas: Yeah! So I think we sorta found ourselves as we went along. Personally, I think we lost our way a little bit when it came to At War With Satan (1983) and Possessed (1985). I think they’re good albums, but I don’t think they’re great albums. They have good moments on them. But for me, in terms of my favorite Venom albums, in order and in terms of playing, songwriting, production, the general progression of a band, I’d say Welcome to Hell, Black Metal, Prime Evil, and Resurrection. I think Prime Evil should have been the third album.

ITL (Chris): I think I’m with you on those, yeah. Prime Evil is a very underrated album.

Mantas: You know what, since we started doing this tour, I’ve met a lot of people who discovered Venom through Prime Evil.

Chris (ITL): I can see that. In 1990, you were at that 10-year mark where there was generational turnover, that whole discovery process would have been underway for a new generation of fans.

Mantas: Yeah, I met one guy last night, and he pulls out an album to sign – he tells me he has everything we’ve ever done, but he only wants this one album signed, his favorite album of all-time, and it’s Temples of Ice (1991).

Chris (ITL): Temples of Ice is a great record, and that actually leads me to my next question. I know that right now, for this tour, you’re focusing on what would be considered the ‘classic’ Venom material, but as you move forward – and I hope this isn’t a premature assumption – but are you looking at picking up where you left off with Abaddon and Tony (Dolan) and working some of that stuff into the set?

Mantas: Oh, yeah, definitely. We’ve got plans for “Blackened Are the Priests,” “Carnivorous,” “Black Legions,” “Temples of Ice,” “Parasite,” we’ve made a list.   And there are other old songs like “To Hell and Back,” “Cry Wolf,” “Poison,” the more obscure stuff. We could technically be onstage for hours!

Mantas: *laughs* At our age, I wouldn’t!

Chris (ITL): So let’s go out on a fan perspective here. Tell me a personal favorite Venom song.

Mantas: That’s tough. The songs that are dearest to my heart are the songs on the first two albums, because that was me as a fledgling musician, a young guy just trying to write some tunes. The first tune I ever wrote was “Red Light Fever,” but because of the way this song I’m going to mention came about, I’ll put this one down as my favorite.

At that point in my time, I was listening to a singer who has always been one of my favorites and who I’ve loved in every band he’s been in, and I wrote this song because I imagined him singing it, the lyrics were his type of thing, the sword and sorcery – you know where I’m going?

Mantas: Absolutely, and the song is “Seven Gates of Hell.” I wrote it with him in mind.

Chris (ITL): I could totally see Dio singing that song. Also in the Iron Fist article, you were talking about how much you love Judas Priest, and how, after you first saw them live, you bought the black flying V and bleached your hair to look like K.K. Downing…

Chris (ITL): …and what was funny to me about that was that, when I first discovered you guys, it was through the Alive in ’85 show, and you came running out onstage, and I was like, ‘THAT is the fucking guy, right there! THAT guy is metal!’ You set my course, for sure.

Mantas: *laughs* Ah, and it was the same for me! The first time I saw Priest was in ’79, the Killing Machine tour, and it was me and the guitarist from Venom, he used to get the tickets to all these shows. I just went along, I’d heard of Priest but I didn’t know anything about them, and when they walked onstage, I just went ‘fuckin’ hell, who is THAT guy?’ The blonde hair, the leather, the V. My favorite band of all-time, Judas Priest.

Chris (ITL): I just saw them last year, and they were unbelievable, still. Just timelessly awesome.

Mantas: Yeah, and I’ll tell you a true story. Many years ago, I bought the “Metal Works” VHS (Judas Priest), my daughter was about three years old at the time, and I paused it on one particular photo of K.K., and I said, “Sarah, who’s that?” And I pointed at the TV, and she went “daddy, daddy!” And I was like, “yeah!”

Mantas: *laughs* Yeah, it was fuckin’ great! And then when she was in primary school, she had show-and-tell, and at about six or seven years old, the teacher told them they had to tell the class what their mommies and daddies did for a living? My daughter was the hero of the class!

But you know, hopefully, we’re bringing the ‘rock n’ roll’ aspect back into metal, and all I can say is that it’s been a hell of a ride, man.

Chris (ITL): You are. And I can’t tell you how happy I am that you guys are back. It means the world to me and a lot of people, I can tell you that.

Mantas: All I can say is thank you, man. We’ll keep it going.