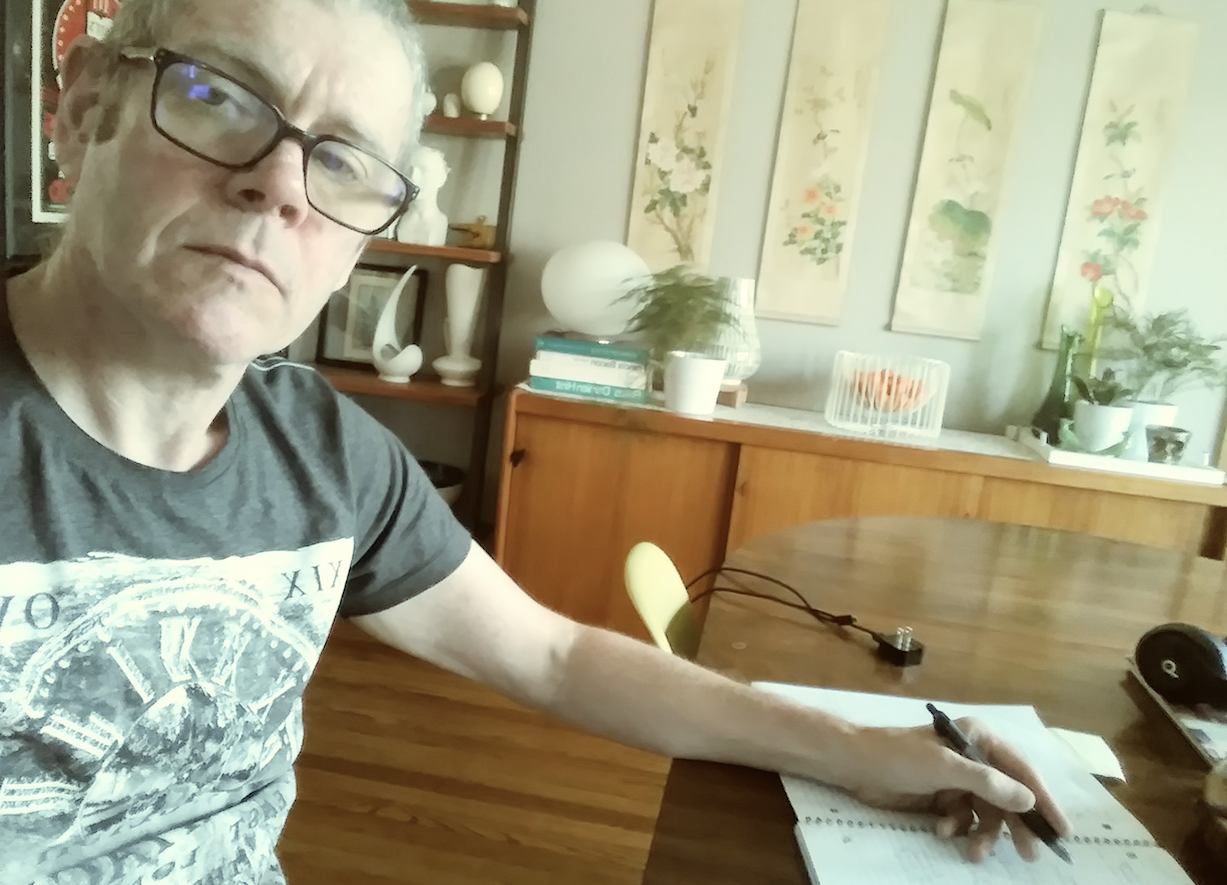 Chris Connelly is a local artist with international flair. He’s an icon in the Industrial music scene with his time in Ministry, Revolting Cocks, Pigface and the likes, but has much more to offer this world. Even in this time of the great global Covid-19 pandemic of 2020, Connelly is focused on his arts and creating more than ever.

Nestled in at his Chicagoland home, deep in the bowels of his basement studio, Chris Connelly has be busy during this governmental imposed downtime. He’s been writing music, making paintings and penning a new book. His latest creation is titled, “The Heart Has to Ache Before it Learns to Beat” was released last week. In The Loop Magazine had a chance to catch up with Connelly and discuss a few things about his time home and his craft.

Chris Connelly: I find it easy to keep busy, I have been doing as much remote work for my job as possible. I finished an album that I had started in December, I have caught up with numerous musical collaborations, I have been playing a lot of music too, practicing and learning. I always keep a strict running regimen so I have been more diligent about that, between 8 and 10 miles per day.

ITLM: What do you miss most with this stay at home order? Do you miss attending concerts? Performing live? Teaching students? Going out for your favorite meal? Traveling the world?

CC: All of the above I suppose, I am beginning to really miss playing live, I miss being in my classroom teaching, having the option to travel. I am not the most social creature, I miss socializing but I can deal with it. Some of this is okay, up until very recently I worked 6 days a week along with recording and playing live, and it had been that way for ages, this is a change of pace, I feel healthy and lucky. I don’t really have any complaints.

ITLM: This is your second or third book correct? I believe Concrete… was the first?

CC: No, this is the fourth, “Confessions of the Highest Bidder” in 1999 and “Ed Royal” in 2010. The first is a lyric/poetry collection that has been integrated into the new book.”Ed Royal” is a novel.

ITLM: Ah, ok, but your first on lyrics and poems. What inspired you to write this latest book, The Heart Has To Ache Before It Learns To Beat?

CC: Well, it’s a collection, I think what inspired me was my own belief in my writing, there were some pieces that I felt needed to be on the page, so to speak, I am thinking in particular of the collection “Newtown Nocturnes” which is 6 poems about Edinburgh that are my particular favorites, the best things I have written. The album does them some justice, BUT reading on the page is another perspective.

ITLM: You obviously are someone who likes to write. When did you first start writing and what influenced you to do so? Was it music first?

CC: I have written since I could write, I loved to draw as a kid too, but writing was, I suppose, more comprehensible to me… if I were to paint or draw a still life, I feel that I got perspectives wrong, there was always something off unless I just got lucky: but writing is something I felt I always had more control over, so I think I have always been growing as a writer, and I have not been afraid to take risks. I have always been a veracious reader, which has certainly informed my work.

ITLM: Well those “risk” have paid off in more ways than one. I think your followers for the last few decades are proof of that. People really enjoy your work. Especially live. What was your first piece of work your wrote that got publicly notice or garnered attention? A song? A poem? A collaboration?

CC: Probably lyrics I wrote when I was in my first band FINI TRIBE, back in the very early ’80’s.

ITLM: There is a lot to be heard from 40 years in your life, starting with FINI TRIBE back in Scotland for sure. What are some of the most inspirational things to you that made the pages? This could be a specific poem, a line from a song or any collaboration effort you did that really stood out, made an impact or action that prompted change in your life spiritually or emotionally.

CC: Good question! I have mentioned “NEWTOWN NOCTURNES”, but playing off that, I think that I have definitely been through phases of writing, as a painter might go through phases, not necessarily thematically, but shapes or colors may INFORM a painter’s work for a period of time, not necessarily a dominant feature, but a definite presence. I can say that happens with me but I do not know if that is obvious to the beholder. When I did the album “THE EPISODES” in 2005/6 , the lyrics became very long form, I definitely moved away from any kind of poetic or song form and started to become obsessed with the shapes and sounds of the words themselves, and that those words, when joined with other words, became a new entity.

There is one song called “EVERY GHOST HAS AN ORCHESTRA” which I think is a good example of this, it’s a journey that exists without movement or time and is based entirely on image alone, in getting to this point I realized that the poems or texts could be “circular” i.e. no beginning or end, just imagery that exists in that space alone (like an abstract painting?) . With “NEWTOWN NOCTURNES” I applied this method (if you can even call it a method) to several very concrete ideas: events that happened to me back in Edinburgh when I was young. I think that is growing as an artist: or it could just be psychobabble, who knows! but I DO think I learn specifics and carry them forward.

ITLM: What is one of your favorite songs you’ve written and why? Solo work or collaborative effort.

CC: I think the song “LARGO” that I composed with BILL RIEFLIN is up there for me.

ITLM: Bill was a true friend of yours. Again, sorry to hear of his passing. He will for sure be missed. I know you worked with him for most of your time in the States through several bands and projects.

Where do you draw influences from? What gives you that creative spark to put pen to paper?

CC: Another good question. The album I just finished that has not come out yet did not start off as an album, they never do, I start writing and it works, when I am NOT writing, I seldom think about it, and when I am IN it, it’s remarkable, no feeling like it, and then I put the pen and the guitar down and it is like I was having a dream I cannot remember. During the writing process of the new record I became very focussed on the idea of an artist who, by injury or illness, can no longer create their art.This was happening to a close friend and it scared me and broke my heart, I did not set out to write about this, but I DID.

ITLM: How has your writing style changed over the years? Starting back in Scotland up until present day, is there one thing that keeps you focused on your art? Or is that ever changing?

CC: I think it is fair to say that after being creative for over 40 years, it’s just the shape I am, it’s what I do and it is no more special than a birthmark or something, I have never NOT done it (which is why I fear not being able to do it)… I will say this, I do it so I can experience the high of doing it and I do it because in doing it I can complete it and move onto something else, and I do not know if that is a “habit”, I am not an artist who can do it and move on without it being available, it has to become a record or a book before I can move on, it makes it complete.

ITLM: You keep releasing music and literature all the time. It really is amazing how much you put out. Especially these past few years. How do you keep the creativity flowing? What topics inspire you today? Where do you draw interests from?

CC: Like I say, it is part of me, a birthmark, I think I was born inspired, I have lived to long to believe it is cause and effect, if I thought that I might just sit around waiting for the next dreadful or awe inspiring thing to happen. I get asked to collaborate and perhaps channel political ire, well yes, I can absolutely do that because I feel it like anyone else and I have empathy and I care about everything, but it is not a daily wellspring. My daily wellspring just exists and I am grateful for it.

ITLM: You’ve collaborated with many people in that time. Can you talk about one of the wildest stories to come from a song? Something many people would find hard to believe or just funny to know?

CC: I remember recording the album SHIPWRECK in 1993 and we dragged a pile of bricks and planks into the studio to stamp on, to get the sound of people stamping their feet, and at one point BILL RIEFLIN suggested it sounded a bit regimented and why don’t we go to the pub across the street, have one drink, just to relax us, and come back and try again….well “one drink” became an all nighter… I think we did it hungover the next day!

ITLM: Who are some of your literary influences? These could be classics, other musicians or…

ITLM: What’s next for you? Another book? Tour? Album?

CC: That’s the mouth-watering question, I know it will not be a tour because no one is going on tour, but just asking that question makes me hungry!

ITLM: When this pandemic is over, what is one of the first things you’d like to do that you have presently been unable to?

CC: First thing I am going to do is go to a record store and flip through some vinyl!

ITLM: That’s one that I am truly looking forward to as well. A passion of mine since my youth has been being a create digger. Maybe we can go together and visit Val’s or your old stomping grounds at Reckless some day soon.

Thanks again for your time Chris. Stay Safe and hope to see you out there again in the flesh soon.

For more on Chris Connelly, his current releases, music and literature, click here.