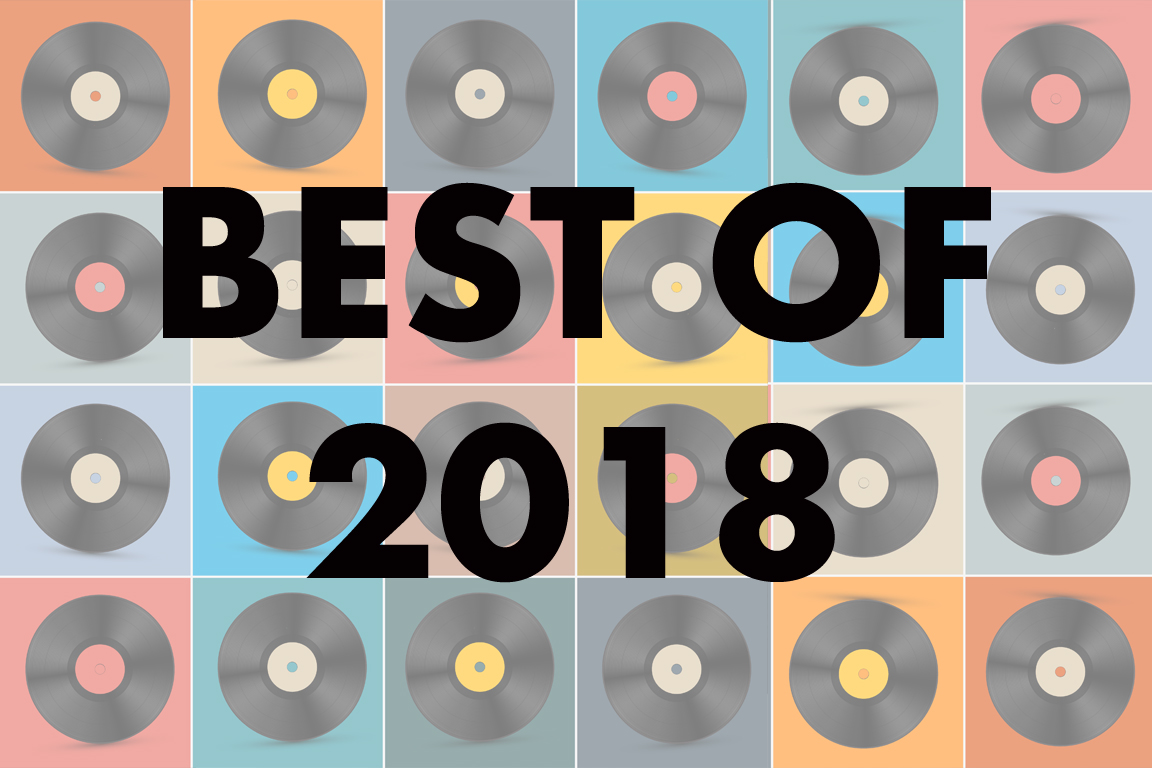 2018 proved to be another power house of a year in music with bands reuniting, awesome live concerts taking place and amazing records released to the masses. Here’s our staff picks for best music of 2018. This includes our opinions on best albums, concerts, new bands and more that happened in the music industry in 2018.

Here are our staff picks in no particular order.

Album Of The Year: Murder By Death – The Other Shore I have been a fan of Murder By Death since 2006 when they released their album “ In Boca Al Lupo ”. They are one of the most unique bands I’ve ever come across. They have consistently put out records that top their previous effort. Their newest album, “ The Other Shore ” is no exception. If you listen to MBD’s albums chronologically you’ll find that they’ve attempted to readjust their sound and style with each release. A move that has arguably helped sustain the careers of many successful bands and artists that have come before them. Their newest album crosses into familiar, yet new territory giving the listener singable songs with true emotion and artistry.

Murder By Death’s sound is unique to define. Some feel they have retained elements of outlaw country that have been married to hard rock and “acoustic balladry”. When listening to this album I feel elements of Waylon Jennings, Emmylou Harris, Motorhead, Marty Robbins and Willie Nelson all rolled into one. But even that description does not do MBD justice, as their sound is truly their own.

Their newest album starts with a beautiful piece of music called ‘ Alas ’. A song that takes the listener to a place of hope and desire. A journey without a plan. It almost represents the album itself, crossing into gorgeous musical territory. Big drums, a sweet acoustic guitar, soft cello, simple and tasteful bass lines, and lyrics that inspire mystery and hope. An absolutely great way to start off an album.

As the record progresses the listener is taken into a deeper emotional place with ‘ Chasing Ghosts ’ and ‘ True Dark ’, songs that are vastly different, yet meant to be played next to each other. The whole album works like that. You’ll hear one song that paints an incredible musical picture followed by a completely different piece of art that needs its radically different musical partner next to it. These musicians have mastered the art form of an album telling a story from start to finish. But listening to the songs by themselves still warrants a pleasurable experience.

Other songs that moved me to my core are ‘ Only Time ’, ‘ Space ’, and ‘ New Old City ’. Having been a fan of MBD for many years, I have found these particular songs to be the best representation of how dynamic and wide their range of composition really is. This band has been around for 15+ years or so and I feel as though they’re just getting started. I truly do not understand why they’re not yet headlining Pitchfork Music Festival and similar shows. Chicago’s Bloodshot Records have done us all a huge favor by allowing MBD to make the records they want to make, giving way to the beauty that is their music.

There were a lot of fantastic albums released in 2018, but this particular record gets my vote because I felt moved from beginning to end. Each element of this band works really well. I feel that the drums on every song were tastefully played. The cello parts are never too much. The bass pops out at the right moments. The lyrics cut through me like a knife ripping through a piece of fabric. The piano sits right in the mix like it’s not even there, offering perfect support for these songs, yet being heard right when it needs to be. Each song has its own feel, vibe, and or universe. I sincerely cannot wait for what else this band has up their sleeve. If you have not yet heard Murder By Death, please take the time to listen to each of their albums. Perfect music for an imperfect day.

Top Live Performances from 2018 (In no particular order)

If there are three things that are returning to the forefront of current taste, it’s post-punk, Britpop, and proper old-school funk that exudes substance instead of style. Nowhere is this convention more on display than in Anderson.Paak’s masterpiece of an album. With guest appearances by Dr. Dre, Kendrick Lamarr, and even Q-Tip, Anderson.Paak’s album brings him from a fringe-indie soul singer to the forefront of modern-day rhythm and blues. Out of all the great songs on the album, “Tints” has been the one to which I keep returning owing to Paak’s distinctly raspy voice gelling perfectly with Lamarr’s flow. Altogether, it’s a phenomenal album and one that should not be missed.

For many music aficionados, it seems that classic punk has run its course and that the likes of the Clash, the Buzzcocks, and Crass will never appear again. But fortunately, in this age of Brexit and Trump, many phenomenal English punk bands are on the rise and spearheading this resurgence is Idles. The outfit from Bristol crafted a truly memorable and incendiary meditation on modern politics and the meaning of masculinity in these tough times. My favorite track: “Great”.

It seems that within the past few years, there has been many artists such as Michael Kiwanuka, Lianne La Llavas, and Adele who have tried to bring back that old soul sound but could not quite pull it off quite well. Thankfully, Leon Bridges shows us all how it should be done. With his slicked-back hair and smooth voice, listening to this album is like listening to the best of classic soul music. The lovelorn ballad, “Bet Ain’t Worth the Hand” and the muscular groove on “Bad Bad News”, all combine with other great tracks to create one of the best albums of the year.

Being in Chicago, I often heard Noname as being one of the best rappers in the scene and for a while, I never went out of my way to listen to her music. But after being convinced to listen to her album Room 25, I have now seen the light. Noname, quite bluntly, is one of the best rappers in the scene. Intelligent, articulate, and with a flow like a murmuring brook across her debut album, Noname explores civil rights, feminist issues, and the struggle of being an African- American woman in America. But despite the seriousness of the material, the lush instrumentation and jazzy arrangements buoy Noname’s flow and are a stark, welcome contrast to the processed beats and autotune plaguing the hip-hop/rap scene.

To put it bluntly, I never really got into rappers like Drake, A$AP Rocky, or Childish Gambino. But again, after deciding to listen to Astroworld after the great reception it received, I was blown away. It is an accomplishment of towering ambition. With production from Tame Impala and Thundercat, along with a who’s who of great artists such as Drake, Frank Ocean, and Kid Cudi featured alongside Scott’s autotune. The songs are unconventional, schizophrenic, and despite my dislike for autotune, it somehow works wonders on Scott’s album.

When Joe Strummer, the legendary guitarist for the Clash, passed away in 2002, he left behind a treasure trove of demos and unreleased material that has been discovered and compiled on this truly comprehensive survey of his career outside of the Clash. For me, any new Joe Strummer release is a cause for celebration since his wide-spanning musical tastes transcended his punk roots. His great songs such as the hard-edged “Love Kills”, the somber march of “Minstrel Boy”, and the elegant celtic bent of “Rose of Eirin” are all phenomenal examples of a singular talent who truly lived and breathed the musical life.

If there is one thing that I am grateful for in life, it is Reddit and more specifically, the subreddit “r/listentothis”, for the exposure it gives to a vast number of unknown but truly remarkable artists and bands. One of those great discoveries was this Californian outfit called Ginger Root who branded their sound as “aggressive elevator soul”. Listening to their song “Call it Home”, I became interested at the organ-powered funk groove but then hooked when that groove boiled into a full-blown dreampop crescendo. After listening to their new album Mahjong Room, I am convinced that this is a band destined for wider recognition. Their songs are all great examples of groovy dreampop, making this one of my personal favorites this year.

Although it seems as if the post-punk resurgence has petered out a bit, the Chicago outfit Ganser is still going strong. After releasing several well-received EPs and being one of the best live acts in the city, their new album thankfully captures their electricity and ferocity. The whirling guitar, the searing drums, and chugging bass accompany some of the best vocal work this side of Red Lorry Yellow Lorry. Every song is great, tightly arranged, and brilliantly realized.

Another great example of the resurgence in English punk, the quintet’s new album is a harsh and at times brutal listen. With soaring britpop-style melodies such as “Angie” alongside the punk-epic “One Rizla” and the lurid “The Lick”, Shame I believe is the one major English band that will take it all as they do in this uncompromising and unapologetic bruiser of an album.

Returning after an eight-year absence, the Rhode Island noise-rock outfit has crafted the greatest album of the year. Led by the charismatic poet-singer Alexis Marshall, Daughters’ new album is a landmark of creativity and well-executed ambition. The doom-laden atmosphere and deafening wail of Nick Sadler’s epic guitar on songs such as “Long Road, No Turns” and the relentless march of “Satan in the Wait” all gel with the fury of Marshall’s lyrics. Altogether, You Won’t Get What You Want is terrifying but an epic, exhilarating album and is my pick for the best album of the year.