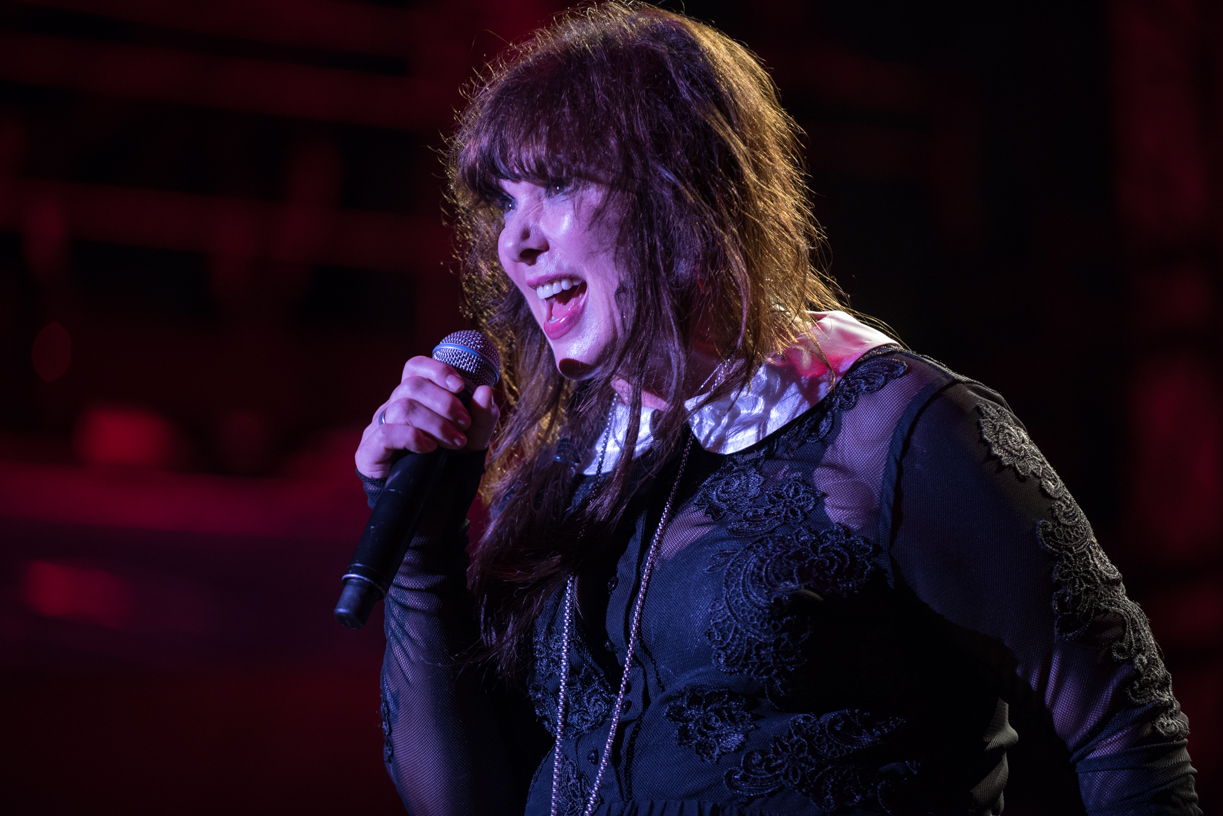 Recent Rock and Roll Hall of Famer’s Heart, are teaming up with two other fellow inductees this summer as they are joined by Joan Jett and the Blackhearts and Rockford, Illinois own, Cheap Trick. They are going out on a summer tour they are dubbing, “The Rock Hall, Three For All Tour” and it’s going on though the fall.

This show at FirstMerit Bank Theatre at Northerly Island was one of the first and what a perfect night it was for it. No massive heat wave, no rain storms and what a view of the city for a backdrop that complimented the music perfectly.

Cheap Trick opened the night. They launched right into “Hello There” and cranked through the classic tunes as fast as Rick Nielsen changed guitars. Robin Zander sported a light pink, almost Don Johnson Miami Vice era suit with white fedora. Tom Petersson rocked a classic grey t-shirt with a seated clown cartoon figure covering his face, black bandana around his neck and grey fedora. Daxx Nielsen (Rick’s son on drums) wore an 80’s looking black and white stripped shirt that reminded me of a chain gang look and of course Rick Nielsen wore a few things including a black suit and t-shirt underneath from his delicious pizza and beer pub, Peace Pizza in Chicago’s Wicker Park.

The band is still full of high energy. Daxx and Tom and tight. Zander’s vocals are still there and Rick’s guitar playing is still wildly entertaining. He changed guitars almost, if not every song, bringing out favorites like the 5 necked checkerboard wonder and a new mini guitar with the words, Rock and Roll Hall of Fame on the fret board. Cheap Trick played through a dozen songs before saying “Goodnight” Chicago leaving the crowd hungry for more.

Up next was the power pop queen of punk rock, Joan Jett and her Blackhearts. People forget how many hits she has until she hits that first note and brings the memories back. On this tour, she brought with Thommy Price, Dougie Needles and Hal B. Selzer as the Blackhearts.  They started the set off with the classic in your face punch of, “Bad Reputation”. One that started her solo career off back in 1980. Next followed through with a classic blast from the past with a song that started everything for her musical career, Cherry Bomb, from her firs group, The Runaways. Jett and Co ran through 14 songs including a few from her new release that fit right in with the classic and may someday be included with them like, “TMI”. Others included covers, ballads and head banging favorites alike before handing over the reigns to the queens of sultry rock and roll, Heart.

Heart came out with a “Romeo’s Daughter” cover, Wild Child. Ann Wilson’s voice still amazes me and apparently the rest of the house as everyone stood up and cheered a deafining roar with whistles and screams. She can still hit those notes like no other. So many tribute bands and reality TV voice shows try and cover Heart songs and just can’t do it justice like the real thing. Her sister Nancy is just as impressive. Always has been and still proves positive today. She’s a more than competent singer herself, but where she really shines is on guitar. She can really make that 6 string sing. The rest of the band is comprised of Ben Smith, Craig Bartock, Dan Rothchild and Chris Joyner. All of which are amazing musicians and compliment the sisters perfectly.

Ann and Nancy look and sound amazing. You’d hardly notice any time has gone by at all. Listening to them is like a time machine of love and emotion that really take you back to a better place. With classics like, “These Dreams”, “Magic Man”, “Crazy On You” and “Barracuda” how can you miss.

They ended the night with a two song encore. The first was The Everly Brothers classic, Love Hurts. Ann asked her friends from Cheap Trick to come out and help and they joined Heart on stage for a great collaboration. This was followed by the legendary track, “Stairway To Heaven”, by Led Zeppelin.

This tour was a no brainer. If you like classic rock and roll from the people who made it classics, go see this show. You won’t be able to stop dancing in the isles, or at least tapping your toes. They just keep coming at you one after another. A real feel good tour if there ever was one.

For more info on Joan Jett and the Blackhearts, click here