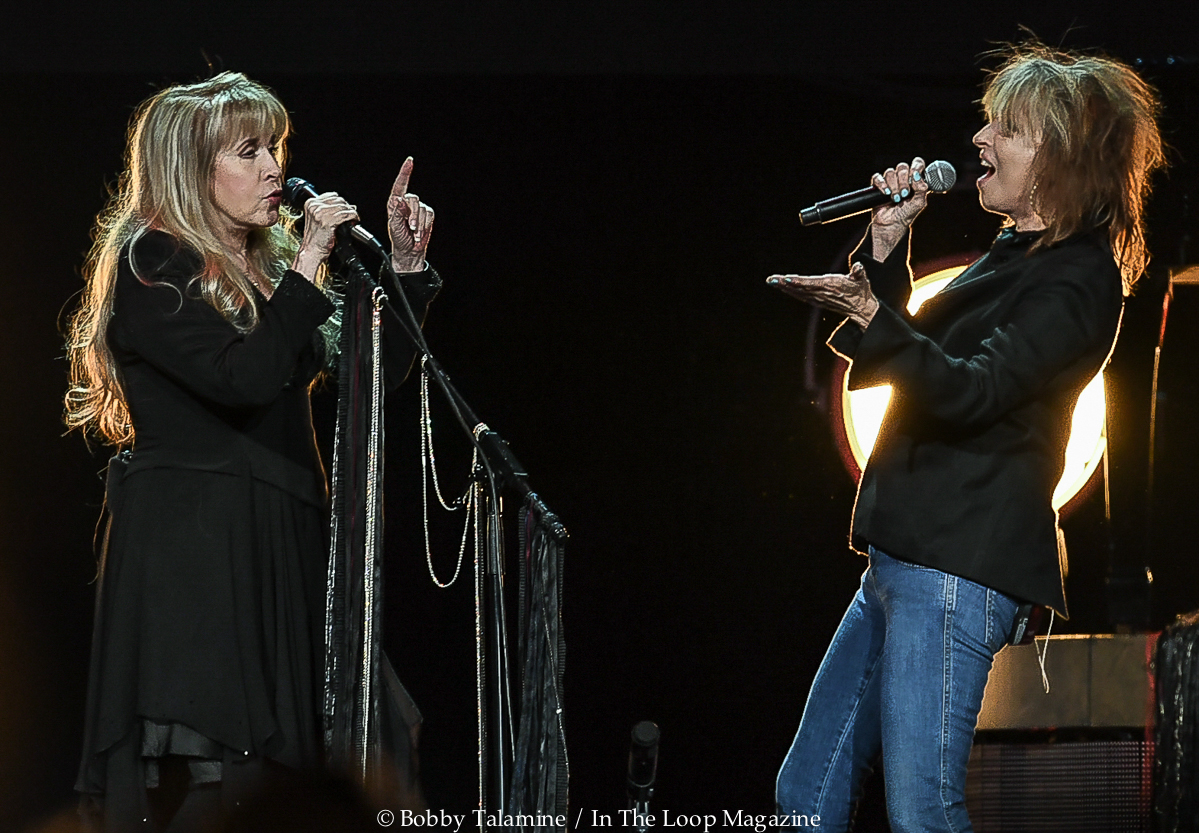 Simplicity does not come easy to Stevie Nicks. Rock’s most popular gypsy has a story to tell. Lots and lots of them. It remains a puzzle to me, that artists with the stature of Stevie Nicks have to to explain the origin to every song that they’re about to sing. Granted, Stevie Nicks has been a subject of gossip for years and years, from her high profile in Fleetwood Mac and the soap opera of relationships come and gone in the band, to her drug addictions, to her personal demons in regards to maintaining weight, and on and on.

Having said that, there are deeper stories that the tabloids are not aware of, beneath the tortured artist fans think they know lies hidden human personal stories that reflect in the lyrics of a song, and why it came to fruition.

Twice before I’ve been to shows with high profile artists who insist on taking the time to explain every song in the setlist. Both times they didn’t work, and the show just derails. The first was Neil Young and Crazy Horse with the Greendale Tour, and the second was Kanye West and his Yeezus Tour. In both instances, fans got unruly, yelled at the artist, headed to the aisles for a beer break or whatever.

In the section I was in for Stevie Nicks, after the fourth or fifth explanation on a song, fans were talking over each other, and heading to the exits for a break. But not to the extent with Neil and Kanye. Looking out to the main floor, and other sections, it truly remained quiet as Stevie was explaining this and that about the songs. But if you do the math, with 3 to 4 minutes to explain said songs, equals maybe two or three songs could be added to the setlist.

I’ll give her props: she doesn’t need teleprompters to explain her songs. She speaks from the heart, as she does when she sings. She’s a performer’s performer. And when the songs come out, she’s got a powerful backing band that doesn’t skimp or make fluff of a song. A lot of this is owed to her longtime friend and lead guitarist Waddy Wachtel. He’s the kind of musician that challenges a band, or a lead singer.
No ego. “Just play man” kinda guy.

It was a delight to see Chrissie Hynde come out and sing with Stevie on a stellar duet of Nick’s breakout solo hit “Stop Draggin’ My Heart Around”.
The trade offs in vocal sounded genuine: and you can tell that they both loved to be in each other’s company.

For most of her set, Nicks kept Fleetwood Mac material to a minimum, “Gypsy”, “Gold Dust Woman” Rhiannon” and “Landslide” were it. The crowd certainly loved hearing these, the closer of the evening “Landslide” in particular- singing along to every word with her. That makes for a magical evening.

Having an opener like Chrissie Hynde helps too. It was a delight seeing the venue full for the Pretender’s set, as the band launched into hit after hit after hit. A short- concise set that did not skimp or go flat. A lot of this is owed to not only Chrissie and her new musicians taking the helm: it’s also due to keeping drummer Martin Chambers in the fold. A physical drummer who can pound out the beat- like Waddy Wachtel, he will not slow down a song because you physically can’t play like you’re twenty. You have to have your chops and keep up with him. The train is out of the station!

All n’ all: a lovely evening with two venerable and iconic performers.

For photos of Stevie Nicks at this performance, click here

For photos of The Pretenders at this performance, click here

Setlist for Stevie Nicks and the Pretenders at United Center