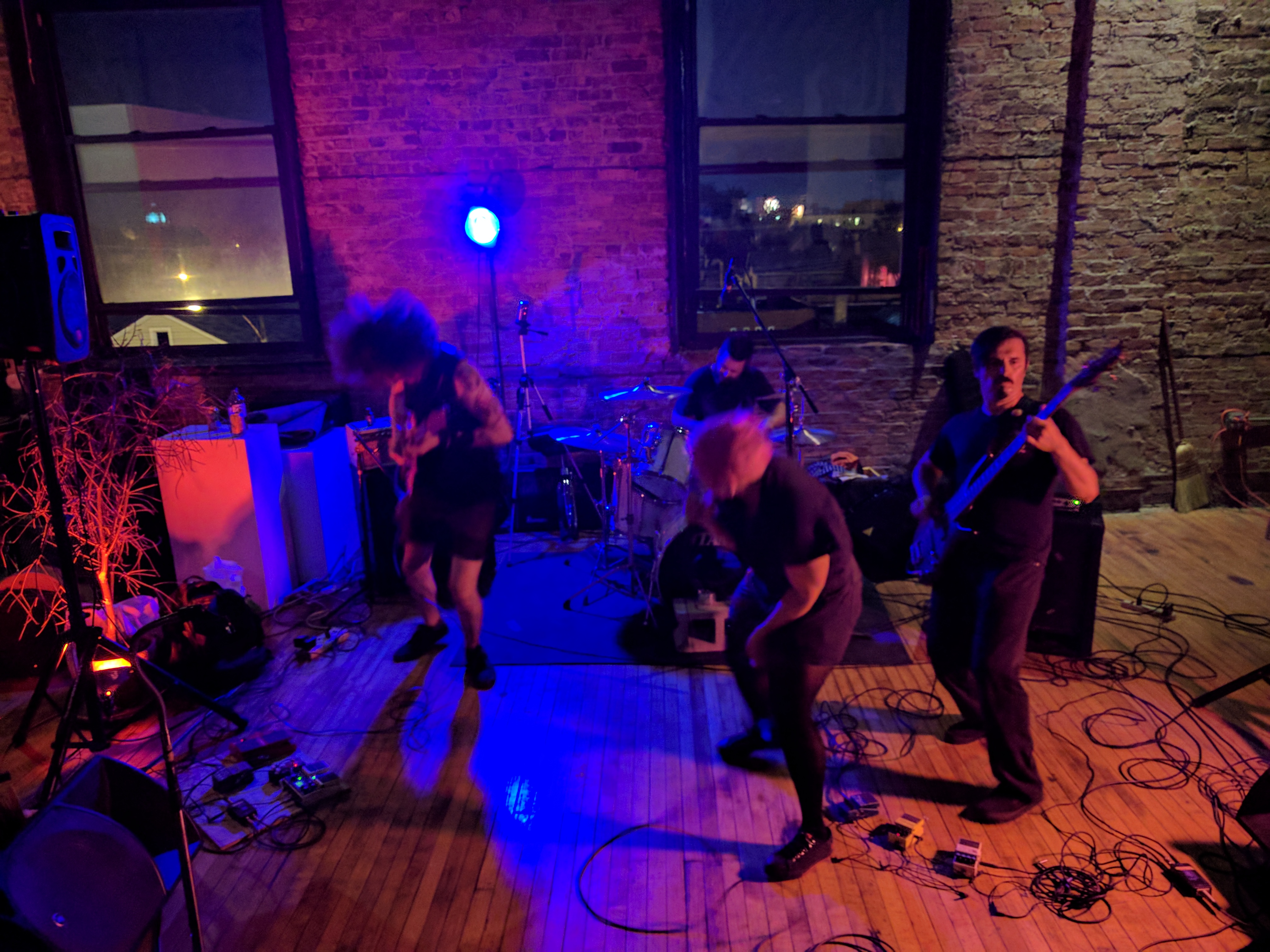 On a somewhat chilly summer night, six bands gathered in the Archer Ballroom in what proved to be an epic do-it-yourself show. Taking place in an abandoned ballroom, the epic night saw riotous performances from the local act, Nonzero, the Texan bands Thin Skin and Flesh Narc, the New York outfit, A Deer, a Horse, the legendary band Ono and, the greatest band in the city now, Ganser. With the lineup split between touring bands and local acts, the music veered from post-punk swagger, neo-funk performance art, to heavy and primal punk rage. In essence, the night proved to be a blissful alternative to the festivities in Grant Park and a testament to the thrill of being at a DIY show.

The show began with Nonzoo whose chaotic, primal, and tribal sound reminded me of the South African band Blk Jks. The lead singer, a small woman with pink hair tore through the set while the guitar, bass, and drums unleashed a torrent of face-melting noise. It was spectacular and mesmerizing.   Nevertheless, the bassist stole their set as he reined in the chaos of their sound with some of the most deft bass-magic I have ever seen. It was truly a remarkable sight as his fingers flew across the frets and managed to wrangle one of the most dynamic sets yet. The only gripe I had with their music however, was how indistinguishable their songs were from each other. There did not seem to be any variation in their music or any particular song that stood out. For the most part, it was a deluge of frenetic bass punctuated by whoops, shouts, and yells. Nevertheless, the band set a high bar for the rest to follow.

The second band to take the stage was the touring band A Deer, A Horse, a trio from New York who are currently in the midst of a nationwide tour. If there is one thing I have come to realize after seeing countless shows, it is that a trio, that is a guitar, bass, and drums, will never be a letdown. The sound was reminiscent hard gothic rock in the vein of Band of Skulls, the operatic sweep of Anna Calvi, and the poetry of Bauhaus. From their set, their one standout was perhaps the song, “Backswimmer”. A dark, muscular tune replete with a wash of ominous guitar and a crash of drums, the song I believe formed the crux of their entire set. The only criticism I had with their set was that A Deer, A Horse could have played a little bit louder and meaner considering Nonzoo’s electric set. However, their music was fantastic by itself and captured the audience’s enthusiasm.

Following on the heels of A Deer, a Horse was the Texan punk band Thin Skin. I also could not tell one song from the other like with Nonzoo’s set. While their set revolved around their bass, Thin Skin’s sound revolved around the drums. Never have I heard the booming roar of the drums sound so ominous, menacing, and truly devastating. The drummer played like an unchained demon, even screaming, howling, and hurling his sticks out into the audience. The songs themselves were passable punk songs about millennial angst, but again stood out simply for the drumming.

Also from Texas and joining Thin Skin, was the band Flesh Narc whose noise rock landed with a thud.. The sound was just noise going nowhere. When the lead singer put on a ridiculous wig, I knew this was going to be a terrible set from an especially terrible band. Their songs did not have any underlying melody or theme to which people could rock. When I looked around, the few people in the audience, who attempted to move to their music had trouble finding a beat to shake their heads. They would start, stop, look bewildered, and then try again. It was frustrating watching them, and it was frustrating listening to this Flesh Narc. Furthermore, the band cracked terrible jokes in between whatever crap they called songs. If you happen to encounter this band, leave immediately.

After the Texas bands, the legendary Chicago band Ono emerged onstage. Their thirty-year sound, calling forth such bands as Suicide and other experimental rockers, was a blend of funk, industrial, soul, and gospel but live, experimental and theatrical. In fact, their set transformed into a work of performance art that was quite simply, hypnotic, mesmerizing, and captivating. The lead singer Travis entered the stage in a white dress and proceeded to cast a spell upon the entire audience. It was almost a religious moment, as Travis struck pose after pose, flourished his command over the audience, and then wandered right in their midst singing songs about sodomy and other taboo subjects. He touched each nearby person, like one of those evangelical ministers who make people collapse in a heap after a simple touch. Buoying his theatrics, was the whirlwind soundscape the rest of his band conjured. For local music buffs, Ono is a revered band as their experimental music essentially set the stage for the electronic music landscape despite the fact that they never left the city. Although their music is not for everyone, especially those who go to shows expecting a normal band, many, including Steve Krakow, consider Ono a local historical treasure. After thirty years of languishing in obscurity, Ono it seems, has finally found its moment as their wonderful set could attest to. They were easily the best band of the show.

Intimidated by Ono’s set, Ganser’s lead singer Nadia Garofalo jokingly exclaimed, “How can we follow Ono?” Travis called out from the audience, “Just have fun!” From there, Ganser closed the night with their relentless post-pun sound that has been the toast of the city. They played material from their Eps along with new songs from their forthcoming album. After following Ganser for the past year, I am firmly of the opinion that they are the greatest band in the city. While the previous bands unleashed a torrent of rollicking punk music and industrial funk that had the audience moving, Ganser was the only band that truly rocked the stage and got everybody moshing to their sound. Their standbys “Candor” and “Pyrrhic Victory” again caught them at their best and in the intimate space of the ballroom, afforded a much grimier and furious interpretation of those songs. Perhaps the best moment of the set, was seeing the guitarist Charlie Landsman losing himself within the sound of the guitar, choking the fretboard to squeeze every drop of chord he could, and then finally smashing it against the floor. The small bit of theater proved to be the perfect way to end the show.

Last Friday night, proved one of the greatest sets I have ever seen and a testament to the sheer fun to be had at a DIY show. With the exception of Flesh Narc, the other five bands, Nonzoo, A Deer, A Horse, Thin Skin, Ono, and Ganser gathered for a truly mammoth night of music. The experience of going to a DIY show is unlike the almost impersonal feeling one gets from going to shows at actual venues. Where everybody simply leaves after the set is finished, DIY shows offer chances to mingle with the bands and meet many other interesting people. If there is ever an opportunity to go to a DIY show, do not pass it up.