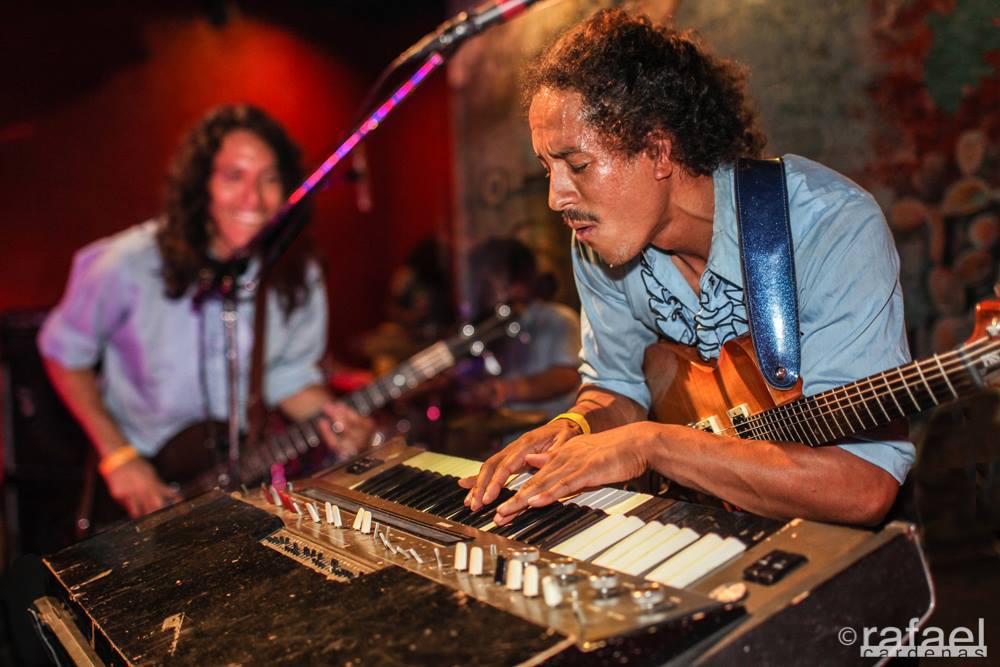 “Freedom is Free” – the new album from the awesomely named, Los Angeles-based rock band Chicano Batman – is one of 2017’s best albums, a wild fusion of Brazilian Tropicália, oldies love ballads, and classic Meters funk that bleeds authenticity and urgency. The album’s striking sound, though, is not the only reason for the group’s renown. In addition, “Freedom is Free” is the most political active, socially astute album yet from Chicano Batman, with songs and lyrics that are equal parts committed to freedom/liberation and outraged by subjugation/inequality.

Chicano Batman recently performed at Chicago’s Lincoln Hall (read our review of the show here), and before the concert, I spoke with the band’s vocalist and frontman, Bardo Martinez. Our conversation was freewheeling and wide-ranging – much like a Chicano Batman concert, in fact – and touched on everything from artistic inspiration, to his political philosophies, to why, amidst so much struggle and inequality, he remains an optimist. Read our conversation below, which has been edited for clarity:

On how DJ Art Laboe and the “oldies” sound influenced the group:

Art Laboe has been DJing since the ‘60s in LA, and he was on KLRA. If you grew up in the ‘80s or ‘90s, you heard him on the radio, and he would spin oldies – Black music from the ‘50s and ‘60s. Part of Chicano Batman’s ecstatic is to represent that era. That shit runs through our blood. Leon Michels, our producer, is just like that, another cat who listened to that music. We really see eye to eye on a lot of different influences, and it’s because of our generational connectivity – anything from oldies to hip hop. And he has worked on attaining much of the gear that was used for those older recordings, like a tape echo delay on analogue, tape machines, old amps from the ‘50s and ‘60s, and so on. Walking into that studio was so new for me, and it was an amazing learning experience.

On how the group’s latest album, “Freedom is Free,” was recorded in just two weeks at Michel’s New York studio:

On why sounds of the past appeal to him:

It’s the history of the LA area. I grew up in La Mirada, which is right next to Sante Fe Springs, where they have this swap meet that became a pillar of Chicano culture for Mexican Americans who had been living in the area for generations. To listen to oldies was cool! That was what people listened to. I remember my homey Brian – he came from a gangster family, and oldies were all he listened to, especially compilations, which were huge at the swap meet. You had low-rider oldies, Art Laboe, and other classics.

On the band’s concept:

The concept of the band was always political, such as including “Chicano” in the name. The ideas behind the band were always heady. I’m a big fan, for instance, of Gilberto Gil and the Tropicália artistic movement, and I love watching the films of Godard, and Kurosawa, and Buñuel. I think it’s all related – people from all over the world have used American pop culture because it’s the center of art, given American global hegemony; they use American culture to represent themselves, just as Chicano Batman is our way of representing ourselves.

Nobody has been representing the music that was coming from Chile, Columbia, all other Latin America. This is music that is becoming more recognized, especially with companies re-releasing the material nowadays, but I grew up with that shit. I have those records in the closet, as did a whole generation of people in Los Angeles. From the beginning, Chicano Batman was about representing that era. That’s why we appeared, on our first record cover, in tuxedos with the ruffled shirts. And groups back then had names like that – Los Chicanos, and so on. Chicano Batman could have been a name back then.

On traveling the country while on tour:

This country is such a trippy-ass place, and the more we drive through it, the more you realize how messed up and colonial it is. Take Detroit – I skated through the city, and I felt like I was driving through Vernon, which is a wasteland in LA where they throw all the waste from factories and warehouses. Detroit is like that, but with non-functioning warehouses that are all abandoned. It’s crazy to see that, because you think you’re in the Soviet Union. There is so much poverty in this country, to the point where it’s third-world status. It’s like being somewhere in Mexico or South America. There is that much economic inequality, and you see those things when you’re on the road.

On “The Taker Story,” the group’s most political song yet:

For me, the song is about being as explicit as possible in trying to describe the issue of humanity, but through a particular epistemological framework, which I learned from reading Ishmael by Daniel Quinn. The first time I read that book, my mind was blown. It essentially tied together everything I had ever learned in my life – from when I started remembering facts to when I earned my master’s in Latin American Studies – and did it all in a very simple framework.

Most of the time, when it comes to studying history, we focus on modern history. We do not go into ancient history, but instead study history after the Industrial Revolution, or the arrival of Europeans in the American continents. When I started reading Ishmael, it became clear to me why. The way Daniel Quinn breaks those things down is so simple, and it makes so much sense. The concept is, this gorilla is telling these things to a man, and he’s trying to explain to the man the myths of western civilization. He’s asking the man, did history begin in 1600? Did it begin when humans began civilizing other cultures? No! And I’ve known that my whole life. I know it from the way my mom sways her hips. I know it from the way my dad moves and acts. I know it because the way I feel, the way I breath. Everything says “No” to everything we’ve been taught since grade school.

Ishmael provided a concept for me to work on that song, the writing of which was the most important undertaking I’ve had as a songwriter.

On why he is ultimately an optimist:

I feel blessed being who I am, and feeling how I feel. So I’m naturally optimistic, I’m naturally jovial, and I owe it all to my mom. She’s from Cartagena, Columbia, which is in the Caribbean, and she’s an amazing woman who is extremely happy all the time. Her radiance pours into you. I’m a mama’s boy, and I’ve always been very attached to her, so I have the same spirit. Music has always been central to our family. We dance every day – if my mom comes over, I’ll put a record on, and we’ll immediately start dancing. And that’s the point of “Freedom is Free” to me. You’re crazy man, you cannot tell me that freedom isn’t free! I’m free, bro!

We just played in Grand Rapids, and it was such an amazing show. Half the time, it’s not even our performance, but the crowd, and the environment we’re creating together. When I feel that, it really uplifts my spirit. Working as a performer is really good for your spirit, and I understand why you have all these rockers who are in their 80s and are still doing it – it’s such a high, that kinetic energy that transfers between a performer and the audience. It’s an existential thing. Music has always been to create a sense of unity and cohesion among a group of people. It’s not a bad field to be in to find happiness, because that’s the whole point of it. I find a lot of hope in this field. We get to spread love and communicate our happiness.