EMPOWER An Original Opera From EmpowerYouth! At Lyric Opera of Chicago 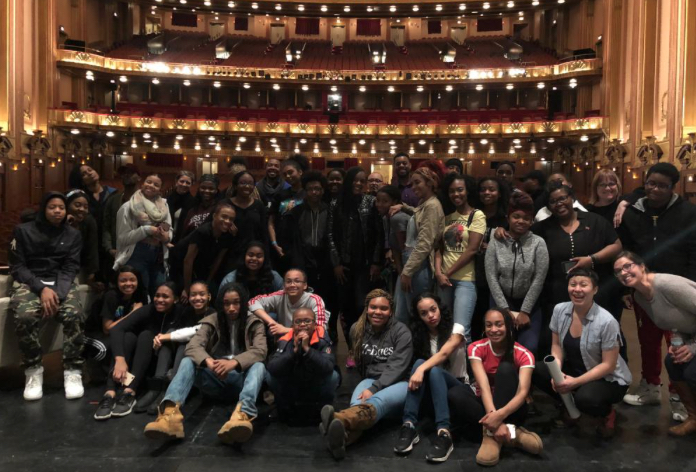 CHICAGO (4/19/2018) – Lyric Opera of Chicago and the Chicago Urban League’s collaborative program, EmpowerYouth! Igniting Creativity through the Arts, is excited to present Empower, an original opera developed with local African-American high-school students. Tickets are $10-20 and are available herefor the one-night-only performance, which will take place Thursday, May 31 at 7:00pm at the Lyric Opera House.

The student participants, who reside primarily in the west-side and south-side areas of the city, have been meeting weekly after school at the Chicago Urban League headquarters since the program’s launch in October. Working with composer Damien Sneed, playwright Ike Holter, director Jess McLeod, and music supervisor Kedrick Armstrong, the youth-centric opera is based on the participants’ own life experiences in Chicago.

Empower will chronicle a group of students who band together to change their south-side neighborhood while fighting against the negative media representation from an overzealous reporter obsessed with corruption. The production will feature all 31 students performing on stage, with some participants also involved in the creation of scenic elements. Joining the production will be soprano Angela Brown and baritone Will Liverman (Ryan Opera Center alumnus), who starred as Addie Parker and Dizzy Gillespie in Lyric Unlimited’s 2017 presentation of Charlie Parker’s YARDBIRD. A choir from Nicholas Senn High School will also be featured in the performance.

The set of Empower will feature unique scenes inspired by Chicago’s south side. The set is designed by Arnell Sancianco, with sound by Ray Nardelli, and lighting by Heather Sparling. Costumes are by Mieka van der Ploeg, assistant costume designer Katie Vaughters, and costume supervisor Alice Broughton.

EmpowerYouth!, jointly planned and administered by Lyric Unlimited, Lyric’s community engagement and education arm, and the Chicago Urban League’s Youth Development Center, is a multidisciplinary after-school program that develops skills in areas such as singing, acting, and movement/dance. The many weeks of preparation leading up to the performance included the students attending a performance of Lyric’s Turandot, meeting with renowned soprano Janai Brugger, a makeup tutorial from Lyric’s Wig and Makeup department, backstage tours, and more.

“Our partnership with Lyric Unlimited is a unique and extraordinary experience for our youth,” said Shari Runner, Chicago Urban League’s president and CEO. “A big part of our mission at the League is to provide African-American youth with expanded educational experiences and access that contributes to their growth as engaged and aware young adults. Not only have these 31 students spent the past few months exploring new avenues for their creativity by honing their talents under the tutelage of professional artists, but they have been given the chance to insert their personal experiences and give voice to their thoughts and expressions. The hard work of the youth, and both organizations, has evolved into a performance fit for a giant stage — the Lyric Opera. We couldn’t be more pleased with this partnership and we look forward to having people from across the Chicagoland community join us to debut this important work.”

“This has been an exceptional opportunity for creative collaboration between our two organizations to create an unforgettable experience for the participating youth,” said Cayenne Harris, vice president of Lyric Unlimited.  “It has been gratifying for all involved to work with this creative group of young people through the immersive EmpowerYouth! program. It is our hope that the many experiences they have undertaken over the past few months, and particularly the opportunity to work side by side with seasoned performing arts professionals, will have a lasting and meaningful impact. We are all so excited to present to Chicago the culmination of their efforts on May 31 at the Lyric Opera House.”

Angela Brown is an American soprano who came to prominence as Aida at the Metropolitan Opera, a portrayal reprised at the Deutsche Oper Berlin, Opera Pacific, Bilbao’s Opera de la ABAO, Cape Town Opera, the Hamburg State Opera, and Milwaukee’s Florentine Opera. She was acclaimed for her moving portrayal of Addie Parker in Charlie Parker’s YARDBIRD, which premiered in Philadelphia with subsequent performances in Chicago, London, and New York. A noted interpreter of African-American spirituals, Brown can be heard on several acclaimed CDs, including the newly released, Grammy-nominated recording of “Ask Your Mama,” composer Laura Karpman’s setting of Langston Hughes’s poem of the same title.

Will Liverman is an American baritone and Ryan Opera Center alumnus who earned considerable critical acclaim as Dizzy Gillespie in Charlie Parker’s YARDBIRD. He has sung with the Civic Orchestra of Chicago in Mozart’s Mass in C Minor, and in Carmina Burana and Handel’s Messiah as a guest artist at the University of Chicago. In 2015, Liverman won the Stella Maris International Vocal Competition, the Gerda Lissner Charitable Fund Award, and a top prize from Opera Index, Inc.

Purchase tickets to Empower and learn more about EmpowerYouth! at lyricopera.org/empoweryouth. A portion of all ticket sales will go towards supporting the program’s second year, which will begin in Fall 2018.